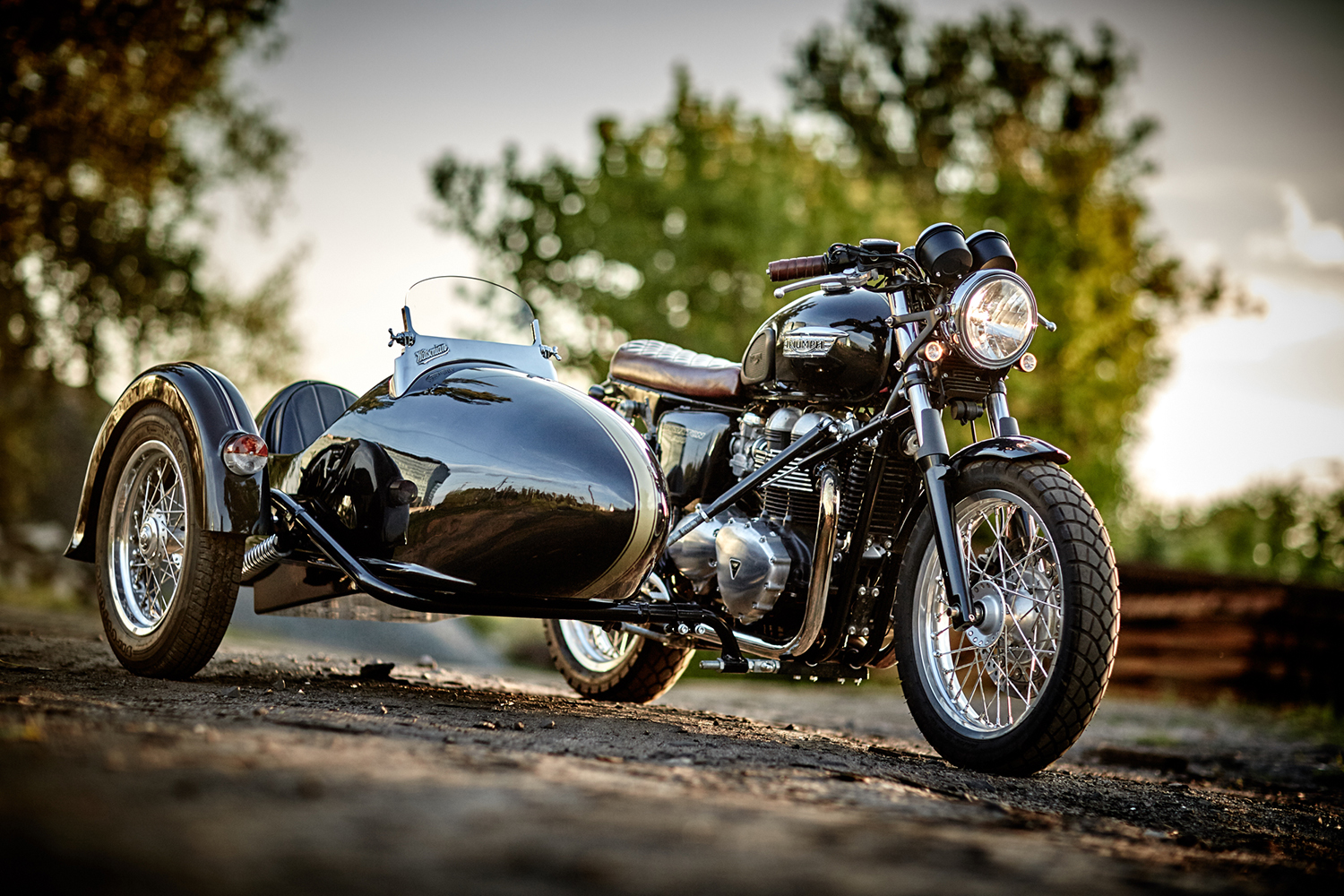 There is no doubt that they’re the odd bod of the motorcycle world, but the sidecar has a history as unique and as compelling as the two-wheeled machines that power them. From sophisticated transport for the elite to crossing continents on the roughest of roads, sidecars are no one-trick pony, having also played a vital role in both World Wars and gone on to provide some of the greatest racing at the Isle of Man TT. For a man as passionate about motorcycles as Christian Boosen, his journey as a custom builder wouldn’t have been complete without taking on the three-wheeled challenge. So from his 86 Gear workshop in Warsaw Poland, he set about creating his own and came away with this truly stunning Triumph/Watsonian sidecar combo that’s packed with the best of British.

Born in Germany during the ’70s, Christian’s passion for bikes came early as he played around with scooters from the likes of Vespa and Simson. But the bug truly bit hard when he bought a 1981 Yamaha XT and rode across Europe, through Austria, along the Adriatic coast, into Greece and onto his final stop in Istanbul. He spent half the time fixing the bike as he went and by the time he’d returned home, he knew this was his calling and wanted to focus on older bikes. “I like the construction and the classic lines of these machines and generally spoken the usage of metal. Till now it is quite difficult for me to get why to use plastic on a motorcycle.”

So it comes as no surprise that the two vehicles he chose to put together this combination come from a prized lineage in British motorcycling. Powering the party is a 2014 Triumph Thruxton 900 jammed packed with nostalgia, while the passenger sits resplendent in a modern interpretation of a Watsonian design, a company founded in 1912. In those early days, a sidecar was built from wickerwork, before progressing to timber frames with ply or steel panels. But having assisted heavily in the war effort, in 1946 Watsonia acquired a batch of RAF Mosquito bomber reserve fuel tanks.

Their aerodynamic profile made them the perfect design base for a new sidecar and the company released them under the name the Meteor. Very few of those original 601 survive, but with the company still going Christian was able to source a modern version. Built off the same moulds as the bomber tanks, the lines are simply stunning and are now much lighter with the body being made from fibreglass. Underneath the chassis is also an improvement on the original, now using a full steel tube frame that incorporates a single shock to provide a more comfortable ride.

The appointments are simply stunning, the Brookland’s style windscreen can be folded down for a little wind in the hair. With the mount sitting flush across the top of the car made from cast aluminium. The wheel uses a genuine Watsonian hub that is laced together with stainless spokes to a 16inch rim. Over the top, the vintage Jubilee fender is a classic styling piece of the post-war period, seen on everything from British twins to the little Puch TF. Then the passenger is well taken care of with a plush leather seat that tilts forward to give access to the rear storage unit.

At 86 Gear, Christian had to bring the two vehicles together and made his own mounts to improve on the handling of the ride. A series of fork and eye bolts allow the two to merge, while the main supporting arms are adjustable so that everything can be finely tuned. Then mounting bars are bolted to the Triumph chassis, secured on both sides of the lower frame to ensure the load is distributed evenly. It might be the least noticed part of the sidecar setup, but it is easily the most important, and a steering damper is added for extra measure.

To bring the Thruxton up to speed the frame has been shortened and the fenders modified so that the silhouette matches the sidecar. Then both have been lovingly coated in rich gloss black, a stunning gold racing stripe and both frames finished in a powder coat for long-lasting protection. Like the passenger, the rider gets a custom seat, the natural leather finish oozing with class thanks to its diamond stitching and the grips wrapped in a similar fashion. Then a switch to custom YSS shocks at the rear was made to handle the extra weight and everything was coming together nicely.

To help give the bike the vintage feel, much of the modern wiring harness has been modified and hidden were possible. The indicators have been replaced with a full set from Kellermann and the instrument cluster lowered. This is exactly the sort of machine you hope and expect to see at the Distinguished Gentleman’s ride, adding a host of fun and flavour that only a third wheel can bring with it. It is a passion that Christian feels every day building such customs and he’s truly living his dream, “There is nothing better than waking up at 6am in good humour because you know that what you will be doing for the next 10 hours gives you so much joy. And it’s a special feeling sitting on my balcony hearing a motorcycle in the distance and realizing, this one was built in my workshop.”