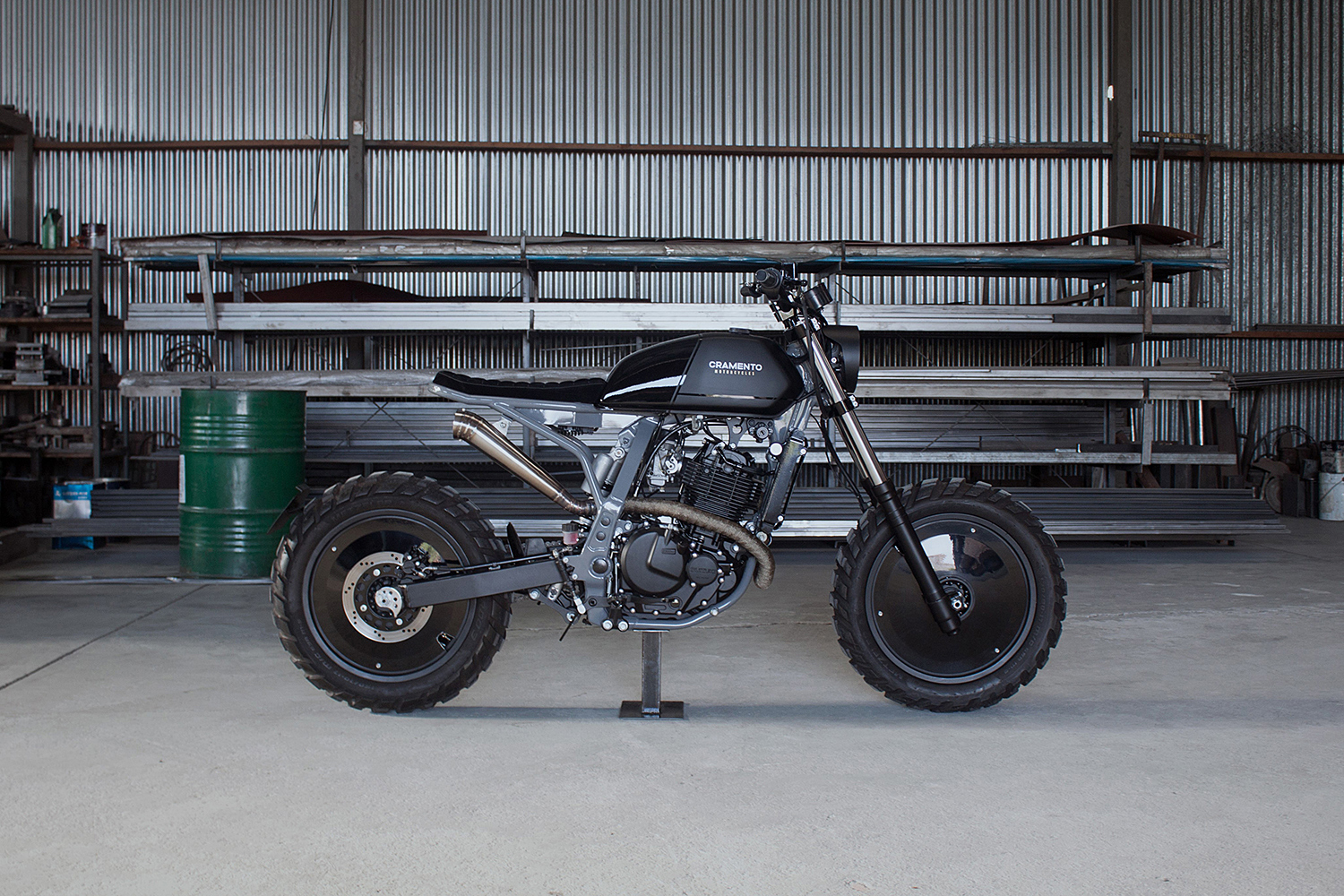 Decades ago one big Japanese manufacturer looked to emulate the success of another and the Suzuki DR650 was born, with the same success as its rival. Like Honda’s Dominator they both provide smooth street riding, genuine off-road ability, lightweight and are happy to go adventuring on a budget. Now all those same factors have grabbed the attention of builders and enthusiasts alike of the custom scene and they’re popping up in all corners of the globe. The small rural municipality of São Marcos, Brazil is no exception and Cramento Motorcycles was happy to oblige. Building this stunning 1999 DR650 custom with a big attitude and bred to dominate the local ecosystem.

Located in the southern part of the country in the state of Rio Grande do Sul, agriculture on the plains, small pockets of industry and rolling expanses of diverse elevated landscape make this the perfect place for a bike that can do it all. It’s here that in 2015 architect and urban planner Augusto Borghetti Chinelatto decided that he wanted to apply his design skills in the creation of motorcycles. “The name Cramento is derived from a typical expression of the region, which has several meanings ranging from astonishment to some kind of grumbling.”

Which is just the sort of sound that comes from the big single, but it all started with a friends CG125 and over the last 5 years he’s built a reputation that had the owner of the DR seeking him out for a full custom makeover. Having owned the bike since near new, it’s a beloved part of the family, but over recent years it’s spent more time broken down than it has burning up the local roads. So the first task for Augusto was to identify all of the problems with the 20-year-old bike and either fix them first or seek to improve those parts when it came to customisation.

Instantly your eyes are drawn to the wheel and tyre combination, but getting there wasn’t simply a matter of bolting them on. With the factory suspension doing an excellent job in all sorts of scenarios, keeping the geometry the same with the change to the rolling diameter required a few tweaks. At the front, the stock fork internals are reworked and then lowered 40mm. But the bigger task was in widening them, with a set of custom CNC machined triple clamps providing the extra room and improved clamping force.

The stock steering stem remains in place with new bearings knocked in, but the front axle, spacers and bushings were all custom made for the job. The wheels themselves are a set of 17in Supermoto units designed for the Suzuki, but over the top Augusto fabricated and affixed a mean set of covers that totally transform their look. These are only surpassed by the Metzeler Karoo 3 tyres, exceptional dual-sport compounds measuring 130 in the front and a chunky 150 at the rear. With the brakes and rear shock overhauled, the roller was complete.

Now it was onto the frame, “To make it look aggressive, the bike became a single-seat, where the subframe was completely rebuilt to shorten and adjust the bike’s proportions and house all the electrical parts under the seat.” Wanting to show off the excellent fabrication work, the revised frame and electrical box are all finished in premium Audi Nardo Grey paintwork that looks a treat. To provide a sinister contrast, this is complemented by the black on the wheels and the engine, that is also carried over to the custom Alcantara seat.

Moving forward Augusto went on the hunt for the right metal to replace the factory plastic, “The fuel tank is from an old Honda 125cc from the 1980s, modified at the top to make it smooth and receive the machined aluminium cap, and at the bottom to house the fuel tap. The paint is in matte black with black gloss bands, all in paint.” With one of the goals of the build being to make the bike hard to pick from a distance, he was well on his way. The recessed 7in LED headlight with its own custom shroud and LEDs in the rear hoop only taking it a step further into obscurity.

That level of custom clean continues with the bike given an all-new wiring loom, lightweight battery and LED indicators all around. Handmade switch blocks from aluminium look discrete and the digital speedo finishes the job. To further clean things up the choke that normally finds its home on the bars was moved down onto the carb, which now draws air through a filtered trumpet. “The exhaust system of the motorcycle was completely redone, with a stainless steel hand-moulded tip, with a DB killer.” And Augusto was done, he doesn’t name his bikes, he lets their ability do the talking and the DR’s refined aggression is going to make a big impact in the mountains of São Marcos.