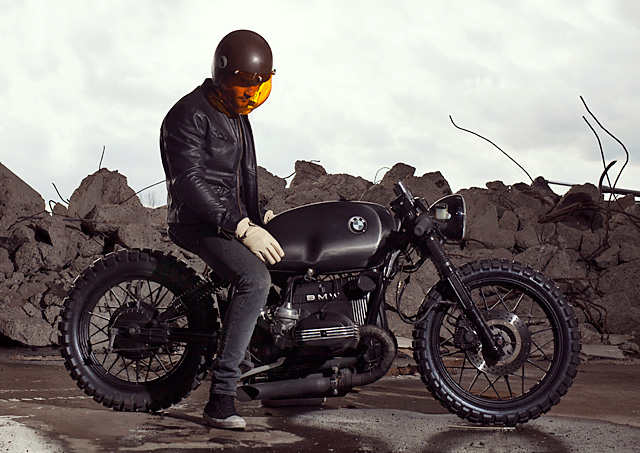 The Red Baron, a.k.a. Manfred von Richthofen, was a German fighter pilot with a reputation that seems to have well and truly outlived the man himself. A legend in his own lifetime, he and his red Fokker Dr.I. triplane became synonymous with dashing heroism, chivalry and a decidedly old-school approach to battle in a time when gentleman were still gentleman. But imagine for a moment if, instead of the all the codes of honour and valour, the guy was just plain bad. No mercy or code of conduct, just an evil bastard with a cold, dead heart. Got that pictured in your head? Great. Now can you guess what bike he rides to the airfield? Why, this one of course. Meet the latest magnificent machine from Denmark’s Relic Motorcycles – their BMW ‘Black Baron’. This bike is owned by Jonas – one quarter of Relic Motorcycles. It’s his personal bike that he’s clearly put a lot of heart and soul into. He has ridden a Yamaha XS650 for a while, but he got to thinking that it was maybe time for something newer and a little more special. Having always liked and admired the ‘pistons in the breeze’ look, solid performance and long history of the old boxer twins, he was pretty sure this was the next bike for him.

“I’ve always had a crush on the old BMW motorcycles,” says the Dane from his workshop. We pretty much know exactly what he means. Then, changing tack, he tells us about his creative process. “When building custom bikes, I always look to the past for a design’s beauty and function. With that said, I always plan ahead and play around with the ‘blue print’ way before I ever buy the donor bike.” Basically, Jonas says he’s mapping out the design and visualising the finished bike in his mind months ahead. It’s hard not to think that more builders should work like this. While there’s a lot to be said with letting the build ‘guide’ you, you’ve somehow always got to know where you’re going to end up. “So nothing with our builds is really random, but is instead it’s all carefully planned.” Jonas also notes that this BMW was actually an old police bike back in the 80’s. “I picked it up in the south of Denmark last year; the thing was in decent condition but it really needed a proper overhaul.” It looks like that’s exactly what it got. While Jonas actually started out making the bike for himself, during the process a good friend of his went and fell in love with the freshly named “Black Baron”. So eventually, after much convincing, he persuaded Jonas to let the bird out of its cage. Of course, that’s not to say the he didn’t put his heart and soul into the build. Actually, it was quite the opposite…

“I like my bikes looking special, with a lot of nice little details both hidden and in plain sight. For this bike I wanted to go all in. And in contrast to Kristian’s bike (pictured at bottom) I wanted to give the bike a little modern twist. The feature that stands out the most for me on this motorcycle is the black matte carbon tank that I had specially done to really make the bike stand out.”

The frame was then repainted and fitted with twin Hagon 420mm shocks. Powdercoat was dutifully applied to the wheels, and a set of Continental TKC 80 Twinduro tires were added to keep things all nice and bouncy bouncy. Next the carbon was applied to the tank and the engine block was sanded down and painted in a matching matte black. The engine’s logo and all the other highlights were sanded down to bare steel for some sweet-looking contrast.

With the airbox now removed, a custom engine plate with some Relic Motorcycles branding was added in its place. Right next door, a set of fresh K&N filters managed to find a new home. And upstairs, a small yet powerful JMT lithium battery was installed to get the party started right. A CNC’d and powdercoated triple tree with an integrated Motogadget speedo finished of the bike’s electrics.

Final touches include the always killer twin cutaway exhausts, some ‘thermal cloth’ on the pipes (I figure if I call it by a different name, it may get a better response. You can;t blame a guy for trying, can you?) and a cherry on top of the ice creams in the form of some custom bent handlebars with a set of black Biltwell grips. Job done.

It’s true that we’ve been featuring a plethora of Beemers lately – and with build like this arriving in our inbox, who can blame us? Besides, we’ve always been suckers for a good WWI story.