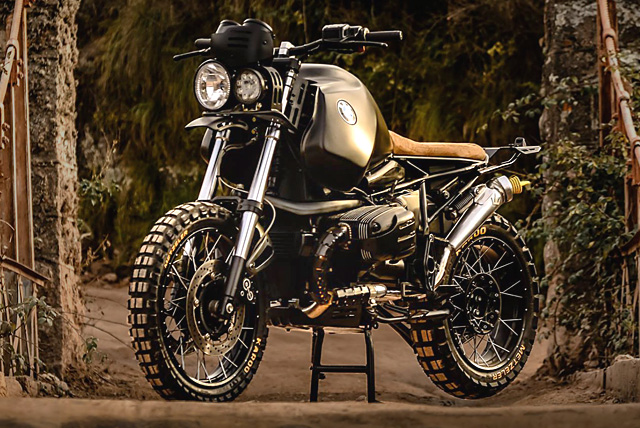 Something strange has been going on in the Province of Cordoba, Argentina, at the highest point of the nearby Sierras Chicas mountain range. On the hill known as Uritorco people have been claiming to see UFOs and there are rumours of an underground city. Things got so strange that when the 21st December 2012, the supposed end date of the Mayan Calendar, drew near the mountain was closed as fears of a mass suicide emerged. Needless to say this is not a place you want to break down but the Sierras Chicas also happen to be an incredible place to explore with amazing landscapes, beautiful suspension bridges and vistas fit for a movie scene. So who better to create a crazy custom to venture into this unknown domain than Cordoba’s own Lucas Layum and his creative crew at Lucky Custom. It’s a 2002 BMW 1150GS that’ll go absolutely anywhere and still look the goods should you need to impress a fit green gal from outer space. The 1150GS has more than proved its battle harden ability travelling 30,396km in Ewan McGregor and Charley Boorman’s epic ride from London to New York that became the book and TV series Long Way Round. Charlie had wanted to use KTM’s but the company wasn’t confident they’d make it, BMW on the other hand backed their product and the sales figures have never looked back. But for Lucas the general mechanicals of the BMW were great, what wasn’t to his liking was the look, “the manufactures design looks like something that will fly, a space ship, I wanted a real-life warrior.” He’s a man who loves a challenge and turning a purposeful adventure bike into a machine that looks like a Scrambler on steroids is certainly that. But when you move between bike lifts holding everything from RD Yamahas, to Rigid Harleys and brand new bikes it’s all in a day’s work at Lucky Customs. So down to business and the first issue for the team was dealing with the unique three-piece chassis of the BMW and that meant removing all the plastics of which the GS has many. With the raw bike exposed Lucas could see that it was the rear end where he would start his adventure with the angle grinder and set about reshaping the metal work. The BMW’s unique design meant that Lucas could work on the rear subframe separate from the bike and offer it up as he went to see how it was taking shape. The idea was to not only reduce the length of the subframe but also leave finished metal work that would present well without the plastic factory covers. With enough metal removed from the centre section of the subframe the rear carrier is reattached to give the ability to still carry supplies out back. The now smooth round tube upper piece forms the main support for the seat and its lines are kept clean with the welding in of an upswept hoop. With the metal work done the front and rear sections of the frame have been powder coated black. Topping it off is custom seat that Lucky Customs felt was critical to the overall look of the build and the Scrambler styling is just right and looks incredible with the aged brown leather stitched over the top.

Then came a problem, “The biggest challenge was the tank, at first the plan was to change it, but we learned fuel storage was only the top side. The rest was the computer, abs brake controller, traction control etc.” The solution to minimising the look of the huge tank would dictate the colour choice, there is no multi coloured paint job or heavy metal flake as you will find on many Lucky Customs builds, but a good few coats of unbroken matte black. The finish draws the eyes to the factory BMW badges and over the lines towards the seat, helping to reduce to visual impact of the mega tank. With that taken care of the all function and no form factory front end needed sorting out too and inspired by the twin light setup Lucas built a new one of his own. New mounts have been fabricated and there is no plastic in sight, all metal and painted black. The right hand light serves as the primary headlight with integrated LED turn signals while the left side unit is a multi LED spot light for long nights on the open road. The headlight surround also acts as the mount for the new front fender that is less than half the size of the factory unit and in metal for more of that black warrior look. The theme of the vented metal was then extended right across the build, shielding many of the vital components that would normally be protected by plastic and adding a unique visual element to the big GS. The belly pan was the next to be crafted and not only looks great but provides exceptional protection to the boxer engines underside. The exposed cylinder heads get the same benefit and the bike starts to take the shape of a Mad Max machine more so than a cardigan styled GS. The final pieces of the exoskeleton wrap around the exhaust, flowing lines like a curving spine hover over the pipe work and provide just the sort of protection you need in an area said to be visited by those little green men from outer space. Powering the party is of course the exquisite BMW Boxer, 1130cc, 4 valve heads and the sort of unbreakable reliability that has made it the adventure bike of a generation. While the horsepower figures might not blow your socks off, very few motorcycle engines are capable of delivering so much torque in such a flat curve across the rev range. What didn’t blow the wind up anyone’s skirt at Lucky Customs was the silver finish the entire drivetrain came in, so the block, box and driveshaft were dropped out in one piece and sprayed black. To add a hand finished touch the cylinder heads have their fins file finished, a time-consuming but rewarding process for Lucas. Then to extract some more power and give the engine a different note a full stainless steel exhaust was fabricated in-house and a GP muffler with exposed welds fitted up for a little walk on the wild side. “The modern boxer engines usually do not have a good sound so it surprised me the great noise that we get from this bike” Then having file finished the heads and carefully welded up the exhaust Lucas got another idea to show more exposed metal and give the murdered out machine more of a raw look. The stock wheels come from the factory in silver, so like everything else they’ve been given a coat of black on every surface. Then each wheel was bolted down and small holes milled into the rims, 5cm apart, to expose the alloy and give the look of a beadlock rim. The latest Metzeler Karoo rubber with yellow lettering was fitted up and they give incredible off-road traction while still be stable on the tarmac and relatively high speeds.

Loving the look of the milled rims, the swingarm that encases the shaft drive was removed and it too now features the milled hole treatment that gives the stock component the sort of look you expect from big dollar performance machine parts. The swingarm is controlled by the BMW paralever rear suspension setup with the front end being the equally quirky but just as brilliant single shock telelever. Having created such a monster there was no way Lucas was leaving the steering duties to the anaemic little bars that come from the factory. So to get the look and feel he was after the stock risers were removed and replaced with Pro Taper big bore items. These hold a set of Pro Taper Tracker bars with the company’s grips also getting the nod that butt up against the relocated BMW switch blocks. With the stock screen and front plastics removed the instrument cluster sticks out and so to keep it safe one last piece of vented steel protection was fabricated to act as their shield. The final thing to do before saddling up and riding into the great unknown of the wild Cordoba landscape was to give the BMW a name and the GS all but named itself as it came down off the lift, Black King.