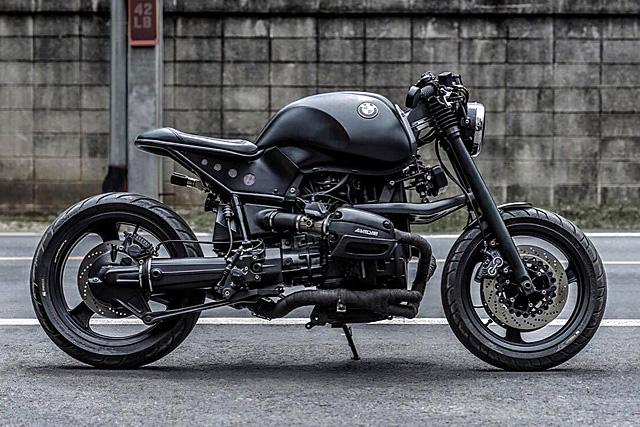 In many ways, It’s BMW’s eccentricities that make them so interesting. From the air cooling and boxer engines to shaft drive and weird headlights, there’s just something about all that awkward Germanic design that really sets them apart. But of all their unique outside-the-square thinking, there’s nothing more endearing than their flirtation with telelever front suspension. Also known as a Saxon-Motodd front fork, it aims to reduce or remove brake dive – a long-time bugbear of telescopic forks. Of course, nature had solved this problem a millennia ago by allowing the big cats to isolate their heads with near-perfect stillness while their bodies weave and dart beneath them. One such big cat is Thailand’s Black Panther, who’s clearly the inspiration for today’s BMW R1100RS by their country’s very own K-Speed Customs. Created for the purpose of selling Japanese-style custom bike parts to a hungry South-East Asian market, K-Speed and their maestro ‘Eak’ have dominated a part of the world that takes its motorcycles seriously. Currently with 12 shops spread right across the country, they are obviously doing something very right. With a predilection for black and a cavalcade of badass and very original bikes to their name, these guys will have you more than adequately prepared should that zombie apocalypse motorcycle race on an alien planet ever eventuate.

When quizzed as to what attracted him to the R1100 as a donor bike, Eak was quick to point out that almost any BMW boxer is a solid proposition when it comes to customisation – as long as you don’t mind a little ‘electrical challenge’ or two. But his answer belies the fact that with its front suspension, this isn’t just any old Bavarian belter. It’s a Telelever, for goodness sakes; a set-up that’s so rarely used, we can only think of one other example to grace these pages. But while the donor’s punchy engine is still a thing of beauty, the same probably can’t be said for the rest of the original bike’s looks. While it’s by no means ugly, it’s fair to say that the acres of brightly coloured plastic wrapped around the original bike hasn’t stood the test of time so well. OF course, this was just fuel for Eak’s fire. Sure, it’s a 20-year-old bike that looks a little out if date, but we all know the potential of what lays in wait underneath all that gaudy 90’s styling. “I wanted to give the bike a new lease on life and make it look more contemporary, too. The inspiration I used was a Black Panther. It’s fast and deadly, but somehow also mellowed and laid-back.” Having done this a few times before, Eak didn’t wander naively into the project. Any of you who are familiar with the RS will know just how big a change the bike has undergone. With a tank and fairing design that sort to be seamless, any hapless customiser that simply aims to ‘pull off all of that plastic shit’ will quickly find themselves looking at a Bavarian Skeleton without so much as a usable tank shape to make things look half decent.

Faced with just that scenario, Eak knew that a decent seat design was a vital part of the final look. “I don’t like those ‘big end’ cafe-style saddles. I much prefer a flatter solo seat, but I still wanted to retain some kind of cafe racer look. In the end I made a small cafe-style seat that is a mix of both looks.” Probably the most remarkable change from the original bike is that new and very shapely tank. The original RS tanks had all the good looks of a budget sci-fi movie spaceship, with none of the kitsch coolness. Eak clearly downplayed the effort require to get the tank looking this good by simply telling us, “I’ve done a bit of reshaping on the area where the saddle and tank meet. I made it a little more slim, and made sure the tank’s shape goes together well with the new saddle. Overall, it’s probably my favourite part of the finished bike.”

And while the tank was totally overhauled, the call was made to keep the wheels stock. “After a lot of thinking, I decided to keep the original three spoke wheels. While they feel a little retro, I really like the way they look. Then for the tires I went with Pirelli ANGEL GTs; up front they are 120/70/17, and for the rear there’s a 160/70/18.” While it’s a fairly unique interpretation, Eak insists that most of his inspiration comes from classic cafe racer stylings. While that’s not so obvious on this bike, a little wander through the man’s back catalogue will probably have you agreeing with him. “It’s no mystery,” he says. “I want the bikes to look cool. I want the people who ride them to look cool, too. And cafe racers are pretty hard to beat when it comes to cool.” Being the trainspotters we are, we browbeat Eak into indulging us with a full list of mods. Here’s what we got. The headlight is from a Honda CB400 Vtec3. He’s added a smaller tachometer and speedometer behind that, along with some clip-on CNC ‘bars for that all-important cafe racer look. There’s new brake and clutch levers with a new Brembo master cylinder and fresh switchgear, too.

Twist the vintage grips left or right and the new YSS front and rear shocks should see you right, while the new LED brake light and LED indicators will let less cool road user know what you’re doing. Of course, the biggest mod was probably that tank, but right behind it Eak spent hours working the subframe and seat combo until it was as close to perfection as a mere mortal could hope for. Finally came the full custom exhaust system exhaust and the new matt black paint to make it all look nice and evil.

Another killer bike from what’s shaping up to be one of Asia’s finest builders? We’d like to think so. Add this to the fact that in most western countries, decent mileage R1100s can still be had for peanuts (trust us – we’ve just looked) and you’ve got very little reason not to make you next impulse bike purchase an RS. Admit it; you’ve always wanted a Black Panther as a pet, haven’t you?