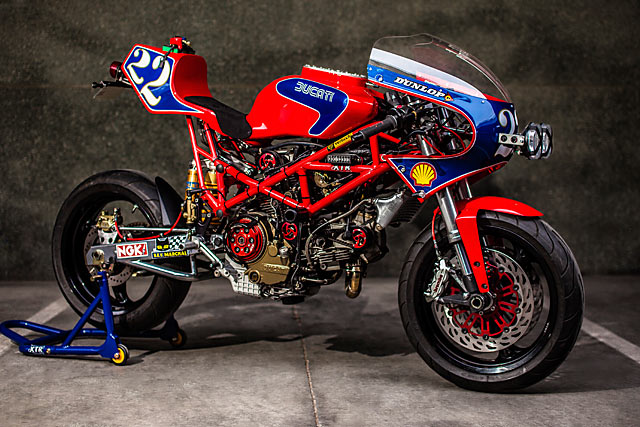 Motorcycle builders often draw inspiration from unusual places. And sometimes it’s hard to keep a straight face as they wax lyrical. They might reference Cold-war era fighter jets, 80’s Formula One cars or the contents of the local pub’s toilet to explain the curves, colours and context of their latest build. But here’s a refreshingly straightforward one for you – an endurance race-inspired 2003 Ducati Monster 1000 by Madrid’s XTR Pepo. XTR is headed by Pepo Rosell and he’s no stranger to Dukes. His previous shop, ‘Radical Ducati’ specialised in – wait for it – radical Ducatis. It’s a curiously simple name from someone whose own narrative has more twists than the circuit de Monaco – Pepo is French-born, resides in Spain and in a prior life used to be a fish biologist. After stepping away from his old shop for a year he’s opened a new custom house with a less restricting moniker; XTR Pepo. While that means Pepo can work on other marquees it does seem Señor Rosell has an obsession with Bologna’s finest. Hell, he’s even done a few hard years working for a Ducati importer in Spain. And that’s where this donor bike came from, Pepo actually sold the bike to its first owner back in 2003 and the customer returned to sell him the motorcycle for this project. That’ll be the first time a Ducati customer has returned to his dealer, years later, without the express intention of punching him in the balls. With the donor bike sourced, Rosell went to work. And he goes about his business without CAD drawings, sketches or photographs of discolored urinals. The form of the build is entirely in his head.

The beginning of the process had the old Monster torn down and engine removed for a complete overhaul. The L-twin had all new bearings pressed in, porting work and an Ergal light flywheel fitted to help spin the high-compression pistons up quicker. All the surfaces were blasted clear of their detritus and reassembled with new pant-pinching open clutch and belt covers. Then attention turned to the frame. The bulbous Monster tank was swapped out for one from a slimmer Ducati 749. And in keeping with Pepo’s love of endurance racing, a distinctive quick-fill gas cap was mounted on top.

The subframe was modified at the rear, cut down to accommodate the new solo seat and buttock-warming SuperMario exhaust. Around the front, brackets were machined by XTR Pepo to mount a half fairing that runs lights reminiscent of the old 750 Ducati F1 factory racers.

In-house manufactured controls are mated to a suspension set up more serious than a night shift coroner. The front forks are taken from the Monsters’ upspec S4RS sibling while Frentubo brake lines control the Discacciati radial brake reservoir and floating front disc. At the rear there’s a product of similar quality with a big ol’ Ohlins shock controlling the compression and rebound of the lighter rear end.

The only thing that Pepo struggled with was getting the electronics working perfectly, which isn’t an easy task when you consider the reputation Ducati has for it’s wiring in standard trim. Getting the Aviacompositi dashboard and Mycrotech ECU synced proved no easy venture, but after plenty of careful work they had everything running smoothly. And the end result is worth it. All the cutting and fabricating and splicing comes together under a paint job provided by Artenruta, with just the right amount of fleck and faux-sponsorship stickers. The livery tops off the whole build, which has to be one of the nicest Ducati’s I’ve seen on Pipeburn in a long time. I guess it’s no surprise given Pepo’s long history with the brand. And while I know the name XTR frees Señor Rosell to work with other bikes… I don’t know if I want him to. The man can sure make a mean looking Duke.