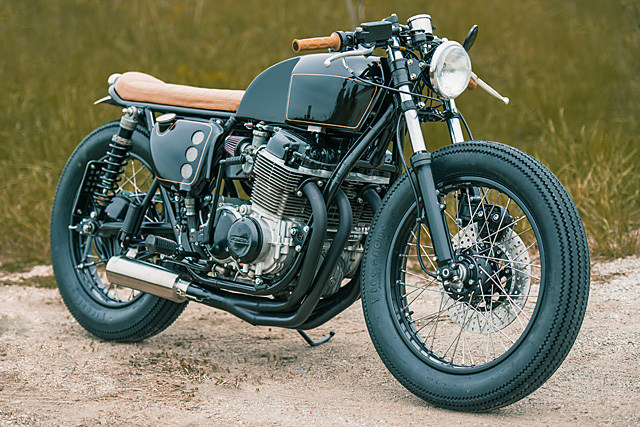 There was a point in time when the bike before you could have been a Yamaha XS650, but this 1974 Honda CB750 had a destiny with Analog Motorcycles from Gurnee, Illinois that couldn’t be broken. When owner Arne Dinse brought his partially customised CB750 to Analog he had an idea for what he was after but was worried about some creepy noises coming from the engine. Proprietor Tony Prust explained they had an XS650 they could do in a similar theme to that Arne was after and with a handshake and a deposit laid down it was set. With Analog Motorcycles churning out brilliant streetable customs there is understandably a wait for their services so by the time it was Arne’s turn in the schedule he’d decided he wanted to stick with the CB, but it wasn’t just the engine that was not quite right, beware the dodgy mod. As the team tore into the bike it was discovered someone had attempted some amateur modifications that would make the bike less than safe left unattended “The frame had been cut by a previous owner to possibly do some engine work. So we repaired that by welding new bungs and frame tubes. Also the swing arm had been lengthened but upon further inspection not done very well since the rear wheel did not line up straight with the frame. So we picked up another stock swing arm to replace that with.” With Tony now happy that he had a frame that was in perfect condition, the subframe was shortened and a loop welded in with a slight up kick to support the seat. With Arne wanting no front fender it’s been left bare and just a small rear unit fabricated to keep the worse of the road mess off the seat. “Now with the structural stuff taken care of we proceeded with the custom work,” which begins with the fairly serious changes to the classic Honda tank. The sides were cut out and new sheet metal fabricated to create aggressive knee dents that are then welded back into the tank. The metal work is picture perfect with absolute uniformity achieved on both sides and the top is finished out with a chrome flip cap. The side covers also received some customisation with three neat holes drilled out and back filled with mesh for a stunning effect and great flow to the airfilters. The custom seat pan was then upholstered in tan leather by Dave Pruney who’d also done the tank work. Before the stunning gloss black was laid down by Kiel’s Kustoms which is finished off with modification highlighting pinstripe work by Brando and you can quickly see why the Honda has earned the nickname “Black and Tan”. As mentioned earlier, before the build was started the Honda engine was making some strange noises so Analog sent Arne of for a new engine which comes courtesy of Cycle X, the CB750 specialists in Wisconsin. With the engine running a treat it was over to Analog to get it looking right and to add some extra ponies. For reliability and better running Dyna ignition and coils were fitted up that bring the old war horse of an engine into the 21st century. A beautiful set of Mac 4 into 1 headers were fitted up but Arne wasn’t a fan of the muffler they come with so Analog adapted a Cone Engineering item for a more customised and individual appearance. The bank of four 28 mm Keihin carbs now breathe through individual K&N pod filters that give a great roar at full throttle. With NGK caps and the right covers blacked out along with the rocker cover the classic CB four gets the clean looks to match its new lease on life. Analog builds their bikes to ride as well as they look and with a request to lower the bike handling wasn’t going to be compromised, “Just because it is low don’t mean it needs to ride poorly is what we told Arne and he agreed.” To get it done in the right way the bike is lowered 2inches all-round with the front telescopic forks getting a new set of Race Tech springs. They’ve also been fitted with Gold Valve Emulators that greatly assist both low-speed and high-speed compression for greater feel and precision without compromising ride quality. Out back has been brought up to the same spec with a custom set of Race Tech G3-S shocks. The braking has also been improved over the ’70s tech with a modern master cylinder providing the power. This connects to the caliper by way of a HEL S.S. brake line for great feel at the lever and clamps a Godfrey’s Garage drilled and thinned rotor. That new master cylinder sits on an inverted set of bars that is a look Analog have utilised on other builds “We flipped a set of handlebars upside down to give it a lower feel but not like a set of clubman’s or clip ons. This is something we have done in the past on Ducati Monsters and on El Matador. We like the look and so did Arne.” Joining new levers, the clutch perched on a GSXR fixture, is a pair of tan grips, a single mirror and Motone Customs buttons. The whole bike has been rewired with a Moto Gadget M-Unit but without many of the additions Analog would normally run “We typically leave all motorcycles we build with all their normal functionality (signals, horn, hi/low, speedo, tach, etc.). Arne wanted the bike to just have the bare essentials so no signals and no horn on this one leaving it clean and simple.” But it does get a 4.75” Bates style headlight mounted with modified aftermarket headlight ears and out back a stunning Analog Reverse Bates taillight. To finish out the build the wheels were torn down and rebuilt with new stainless steel spokes and nipples from Buchanan’s. They’ve been fitted up with Arne’s tire of choice, the classic styled Firestones for the vintage look that definitely matches the theme of the build. With the Honda set to be put to good use on the road Analog had many of the components powder coated by J & J for a long lasting finish that will keep “Black and Tan” looking slick even after years on the streets. Which is what Analog Motorcycles is all about, a lot of custom bikes clearly compromise a great deal of their streetability for the look, but when you sign up with Analog you ride away on the bike of your dreams that also operates just like a great motorcycle should!