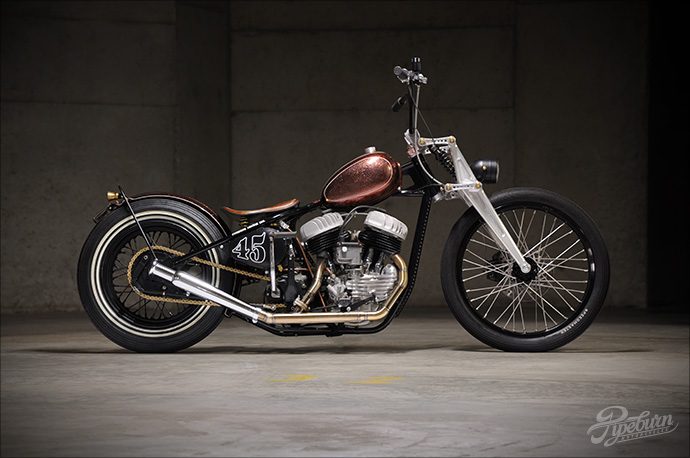 Please welcome back Mr Paul McKinnon to the Pipeburn family table: “It all started with a conversion with a mate of mine, Bill. He is a collector of pre-WWII Harleys. A while back we put the blower set up on his ’39 side-valve. I made the pipes and manifolds, but then his mate wanted to ride it around Australia so they took the blower off, and it was never to go back on. Bill scrounged around and found most of the bits I would need to get an engine bolted together. The next piece of the puzzle was the front end. A mate of mine has a CNC mill and we sat together for around 40 hours and came up the programs to cut it. Once I had a complete front end, I bolted it to the frame and set the whole lot up in a jig so when I welded to it, it didn’t pull.” “I bolted a loaner engine (mine was being built by side-valve legend, Johnno from Redfern Motorcycle Spares) and my trans to the jig and started bending and tacking tubes. The motor is made up of some new old stock and some second hand. It runs like a Swiss watch for its vintage and I’d estimate about 35-40hp with the 6psi of blower pressure it’s running.”

“I made every bracket, the jockey shifter, clutch and brake pedal, aluminium oil tank, blower piping, exhaust and the bars. I bought the tank from Ebay, I cut the original filler off, machined a female thread in the lathe and tigged welded it in. Then I machined a two-piece aluminium cap with an internal breather.” “The exhaust is a cocktail shaker from Trojan Classics and I did the pipes out of 316 stainless. I decided to leave them natural for now… though they may get a polish down the track. The fender is from Danny at 7 Metal West, love the look of his fenders and he is the only guy I could find that makes a fender with a small enough radius to suit the Shinko MT90 rear tyre.” “A mate of mine found the tail light on Ebay and I made the fender strut/tail light mount. The headlight is half a streetfighter light that was laying around my mate’s shop; I fabricated the brackets. The front wheel is an aftermarket wheel for a CRF450 and the front brake is off a CB250, a leftover from a previous build. The front shock is a Fastace rear shock for a Thumpster pit bike.” “I near-completed the bike, then stripped it completely and sent the frame off for blasting and paint. The tank and fender went to my good mate Smith from Smith Concepts for 9 coats of metal flake and clear over a black base, while I took a much needed family vacation.” “The day after I got back I started putting it all back together. I still needed to make some fittings for the oil tank and tig them on, an inlet manifold for the S.U. carb, oil lines and a few other bits and pieces. By the end of the week it was pretty much done, the head bolts came back from plating, so we bolted them on and fired it up.”

“The blower is an Aisin AMR300 from a Subaru – we have it running 6psi but I’m about to up it to 10. The whole build took 15 weeks from first thought to finished bike. I couldn’t think about much else while I was doing it. My business, Evolution Custom Industries (a.k.a. Evolution Motorsport) has a motorsport background but I really love building bikes. I was never trying to build a show bike, just a good looking bike with hot rod features. Overall, I’m very happy with the way it turned out.”

A blower. An aluminium girder front end made from scratch. An engine from 1940. 10 coats of paint. Handmade everything. After the shoot I asked Paul if he planned to sell it. “No way,” he answered, “This one’s mine. After all, if you go around telling people you’re a decent custom bike builder, you gotta be riding something that proves it.” Consider yourself proved, Paul. Consider yourself abso-well-and-flippin’-lutely proved.