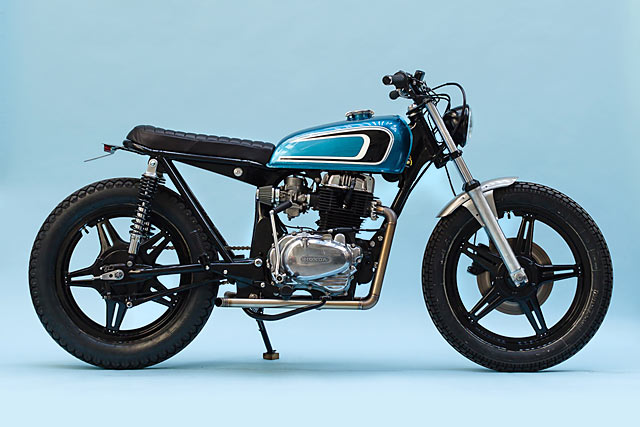 Clearly, France’s Bad Winners never sleep. Either that, or they have a rather serious amphetamine problem. Why, you ask? Because here you have their third new bike in five weeks. Seriously. This time it’s a superbly timeless Honda CB400T build that looks as good now as it will when cars start flying and mobile phones can out-think you in a chat about French Existentialism. They call it ‘Raw to Raw’. We call it our new addiction. The Honda rolled into the Bad Winners shop in a very sorry state. Supplied by the client, to say it was in poor condition would be comically underplaying the bike’s condition. Walid and the boys say they knew straight away that they had their work cut out for them. The inspiration for the build was nothing short of the whole of Honda’s classic bike back catalogue. If it made Soichiro happy, it was on the list. Now combine this with some real-world touches for driver comfort. These included a new Motogadget speedo and a smattering of other electronics to make sure the bike behaved itself as best it could in its new role. As Walid mentions, the CB400T was essentially a good engine and a nice set of Comstars on an otherwise nondescript bike. So his first post of call was to liven up the rear with a total reworking, mainly with the aim of accommodating a more svelte, streamlined seat than the original frame would allow. Of course, such major reconstructive surgery meant an engineering challenge in the form of relocated and rebuilding the suspension mounting points. Their new position gives the bike a much more upright, tough-looking stance at the rear when compared to the factory bike’s butt-down design.

Next, a tank from a CB360 was selected for fuel holding duties. While you might think that the swap would be an easy one, it involved cutting and reworking the tank’s interior to make sure it sat above the engine in just the right position and with the correct baseline to ensure the bike’s lines stayed true. With the aesthetics sorted, Walid took to the engine like a Hollywood studio to a new superhero franchise. All the usual replaceables were looked after, ensuring that the new bike ran as well as it looked. This included a new set of pipes, made right alongside the Honda in the Bad Winner’s workshop. YSS rear shocks were installed, and the front bouncers were refurbished and trimmed of around a third of their original travel to ensure the stance was bang on cool. Walid notes that the real challenge for him was the frame mods. While the addition of a simple rear hoop arrangement wouldn’t trouble most decent bike builders, moving and/or rebuilding things like suspension mount points requires more nous than your average bear. Get the measurements or engineering wrong with something like that, and you’ll be testing those new Kevlar jeans of yours much sooner than you or your lily-white butt expected. Walid notes that his favourite part of the finished bike would have to be the way the new rear subframe now sits with the lines and the looks of the CB360 tank. That and the fresh coat of classic seventies Honda metallic blue. Like the bike itself, it seems to look even better than the original ever did. Nice work, Bad Winners. We can’t wait to see what you come up with next week.