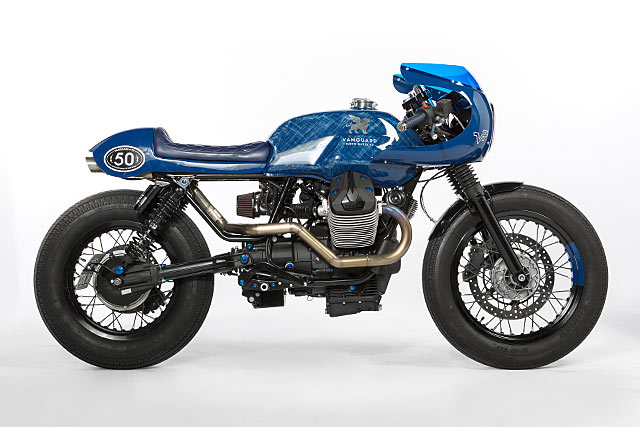 Working on a bike project with a team of new people can be a hellish experience. Even simple things like picking paint colours or upholstering a seat can take up many hours while terms are defined and differing expectations are met. But for Switzerland’s Gannet Design and the Wrench Kings and Vanguard Clothes from the Netherlands, it really seems as if they were all freakishly, cultishly in sync. It’s the only explanation we can come up with for how such a superbly turned-out bike came out of such a diverse bunch of brains. It seems the bike’s tricky design decisions were handled by the renown Ulfert Janssen at Gannet Design, making the rest of the build a not-so-simple matter of realising his amazing vision in metal. “After we agreed with the design in collaboration with Gannet and Vanguard Clothing, we started the build,” says Wrench’s ‘Take’. “As usual, we began by cutting the rear sub frame. It got disassembled, lowered and shortened. Next we commenced fitting the new front fairing and rear end. At this moment it was clear that the rear was going to be tricky because it wouldn’t fit”. The pre-ordered rear end was around 5cm too short and way too small overall. “So, we decided to cut it and make a mold so we could make something new with the correct dimensions”. And as per the original Gannet design, the brake light is actually the Vanguard logo, which is cut out of the rear end. “We had multiple ideas about how to cut this but we finally chose to do it the authentic way – hand crafted”.

After finishing the rear, they moved on to the front fairing. “First off, we started by creating a mounting system for it. We saw that frustratingly, the new front fairing also wasn’t going to fit. It was too long, too high, too thick and the window wasn’t as per Ulf’s the design. In addition, the front fairing had to be hand modified to allow for the steering arc. But after much effort, we got there in the end”. After nailing the most frustrating part of the build, the bike was sent to locals WiMoto for a custom RVS exhaust. “This is a hell of a job and you really need some experience with it. That’s why we chose to outsource this to a specialist like WiMoto,” says Take. By all reports, the exhaust is flawless and looks just like it came from the factory. “The tank is original but, we needed to customise it so we could fit the Monza cap and attach the metal plates with the Vanguard logo to the bike. After this was all done, we started with the mock-up and everything fitted perfectly”. Thank heavens for small mercies.

Next, they painted the rear, front and tank, while also giving the tank an unusual and distinctive look by sanding the freshly painted colors and covering it with a gloss layer. “The last part was the electricals. Here we made a new wiring loom and fitted an Motogadget M-unit”. And last but not least, the color scheme. “Most of the bolts are blue anodized in the color of the buttons of the V7 Vanguard Jeans. The pattern on the seat is also referenced in the jeans. There are so many details and they all have their own story to tell. All the components and small touches used in the jeans can be found referenced on the bike. We are very, very proud of the end result”.