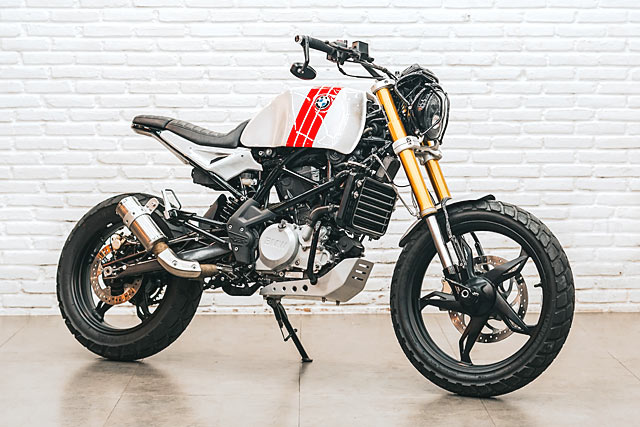 In case you haven’t already figured it out, they buy a lot of bikes in India and South East Asia. 2 billion odd people will tend to do good things to your sales curve. Most manufacturers are falling over themselves to get a piece of this exotic pie; even the likes of Harley, Triumph and Norton have their fingers in there. And now BMW have teamed up with Indian maker TVS to produce the 313cc, single cylinder, 33hp G310R naked. It’s the first ever BMW bike not to be made in Europe, and one of the first we’ve ever seen customised. Here’s how Bali’s Smoked Garage see it as a scrambler. And we like what we see. “At Smoked Garage, we are all about the future and pushing boundaries,” says the shop’s Ricardo Agostino. “We leave but learn from the past and always look for ways to define and revolutionise the unknown. Being based in Bali, Indonesia, the opportunity for creativity is truly endless and the abundant means to execute those ideas is what allows Smoked Garage to thrive and excite.” More and more, Smoked is seeing an influx of people coming into the shop from all around the world. “They have an interest in motorcycles – some big and some small. It’s similar to the ‘Ace Cafe’, but in the southern hemisphere.” The main attraction, of course, are the bikes. “They are such a recognisable form and we wanted to recreate that feeling with our next project.” Enter their BMW G310. “Our first thought was that there was lots going on with this bike; to our eyes it was very complicated. So we decided to go for a scrambler build that would display an adventure purpose with similar aesthetics to the original, but also gently shoving it into the future.” “The main inspiration is the original BMW R90. It’s a light nimble bike, with a truly timeless shape. But of course, being Smoked, we needed to bring this build into the modern era and into the future. It all began when the customer came in with a brand new 2018 BMW G310 which he had bought straight from the BMW showroom floor. After a few coffees (it was the middle of the day – beers will come later!) we came up with a minimalistic design, to remove the clutter of the original but also to make a big impression.” Originally, Smoked decided to use a BMW R NineT, but the G310 proved lighter and nimbler, which for the streets of Bali is perfect and to retain the feel of the original R90. And just between you and me, we’ve seen enough custom R nines to last a lifetime. “For a scrambler build that’s going to go where there are no roads, light is better. After stripping the body clean, we used a foam to build its new shape. Once we were all happy with the measurements, off to the metal works we go.”

[superquote]“Originally, Smoked decided to use a BMW R NineT, but the G310 proved lighter and nimbler, which for the streets of Bali is perfect.”[/superquote] “The design is very compact, this came with its difficulties. We needed to build a custom airbox and fuel pump to accommodate the streamlined build. We also had to re-wire and hide many cables to achieve the desired look. That was the most challenging aspect of the build; streamlining the shape and after we got the exact look we wanted, then everything else just fell into place. We cleaned up the rear lights by building them into the chassis. All the indicators have been removed and they are now installed on the end of the handlebars, along with bar end mirrors.” The finishing touch to make sure the beemer really stands out was the exhaust, and a really loud exhaust at that. “Once we were happy with it and the rest of the build, the bike was sent to the paint shop. We decided to retain the original red and grey colorway, but to polish them to give a modern shine. After two months and many late nights with the customer – this time over beers – we have built a motorcycle we are extremely proud of!” “The minimalist, aggressive and modern look with an excellent ride will look as good as it does on the streets as it does in the middle of nowhere. It’s nimble and effortless to weave through traffic and also easy to maneuver in the softest of Bali sands. We didn’t bother with a name, it doesn’t need one. Twisting the accelerator, hearing the roar of the engine through the exhaust and not flinching on dirt roads and potholes is an exhilarating feeling.” It’s a clean, very refined and cool-looking BMW scrambler that will make even die-hard environmentalists turn their heads and look. “What they think of, we don’t care. That’s the DNA of the custom’s design; it does what it wants, when it wants. A rebel through and through, and a handsome one at that!”