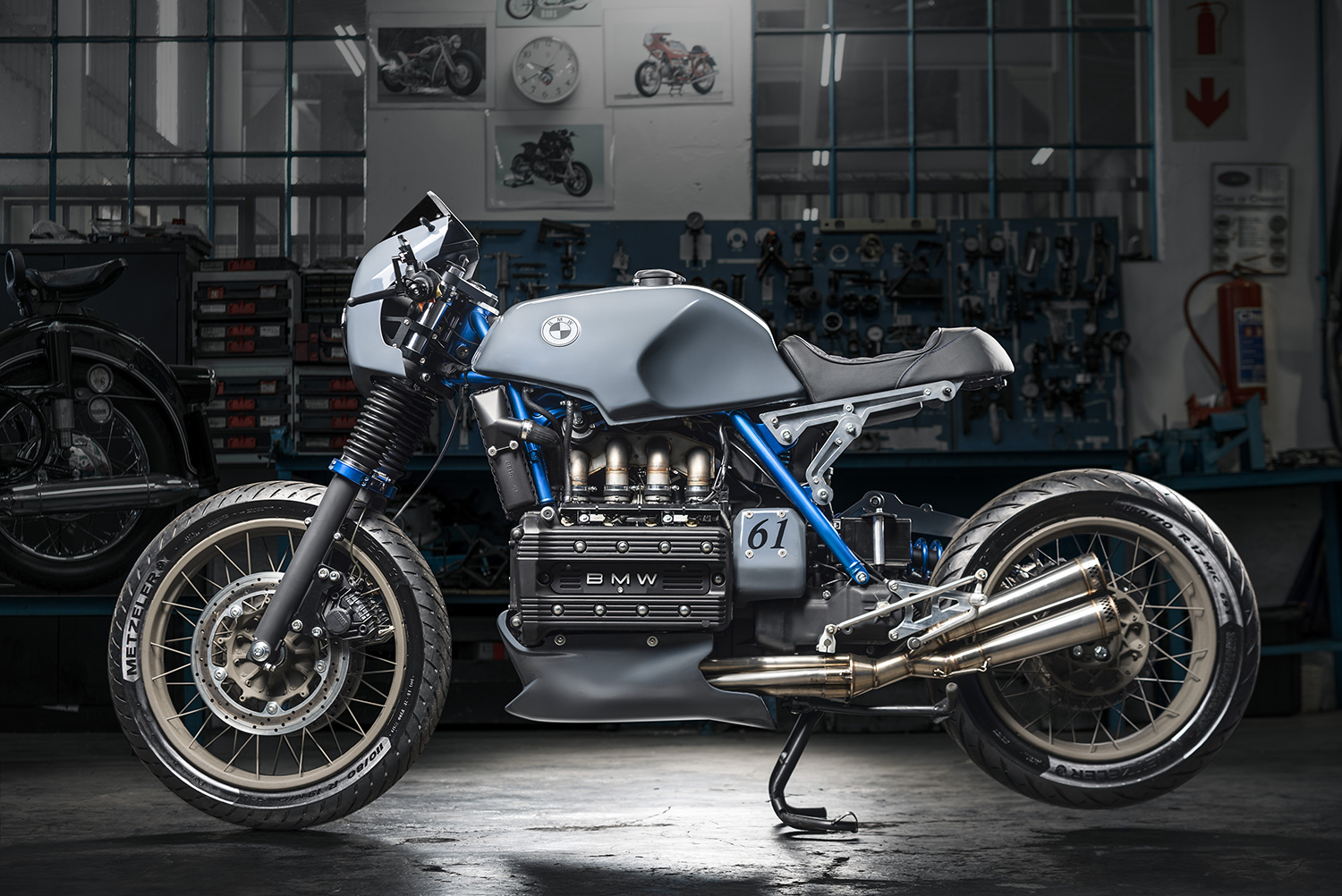 There’s something about BMWs that causes large portions of the motorcycling community to become hopelessly obsessed. For many, they are like heroin to a junkie. Donovan Muller was born to a BMW addict, so there was really no hope of avoiding the affliction. His legendary late father Ray started one of South Africa’s oldest motorcycle establishments, specialising in BMW bikes and adventure tours. Donovan now runs the Cytech Motorcycles business and has been building, selling and servicing BMWs since leaving school 22 years ago. So, when a customer decided it was time to upgrade from his 1991 K100 to a new R1200GS, Donovan was more than happy to take the ‘Flying Brick’ off his hands and start a new custom project.

After purchasing the K100, Donovan wanted to give it the full café racer treatment. As luck would have it, a good customer was willing to pay for the finished build and simply told him to ‘do what he does best’. With an open brief, the Cytech team got to work. “I bought the bike watching the K100 underdog slowly sneak into the custom world,” says Donovan. “I wanted to build a complete one-of-a-kind that would inspire more guys to build more K100 café racers and also show the uniqueness of being able to make something different to what is being built at the moment, hoping to start a new trend and love for these machines.”

The build started, like most on these pages, with a complete strip-down. The rear subframe was removed and new mounting lugs were welded to the frame. The new suspension and subframe were sandblasted, then chrome powder-coated and mounted to the frame. The main frame was then modified for the new rear end and painted candy metallic blue.

Next up, a new custom single seat was made in-house using black leather and grey suede with blue stitching. A classic BMW logo was stitched at the rear of the seat in white. Underneath the seat the stock lights were binned for a smaller High Side micro tail light.

Moving to the front, the original bulky K100 fairing was replaced with a trimmed-down Puig front fairing cowl and tinted wind deflector. A more powerful matte black Max-Inc LED headlight fits snugly in the cowl, nicely incorporating the BMW logo as a shield. Behind the cowl, a CNC billet top yoke was machined to house a Motogadget Pro Speed Cluster Unit.

For a smoother ride, the original front forks were upgraded with Progressive front fork springs and a Telefix front fork brace was added – also painted in a metallic candy blue. The original front brake system was modified with laser-cut spacer plates to accommodate the larger front disc brakes.

To increase the performance of the four-cylinder 987cc engine, Luftmeister Performance Camshafts were used and a custom air box chamber was fitted. The exhaust and tail pipe system was upgraded, which included new custom-made mesh-style exhaust tips. Not only does the exhaust look great, but it also produces a boisterous new note.

The benefits of owning a BMW workshop include having a plethora of factory parts at your disposal. After looking around to see what would suit the café racer style, Donovan decided to lose the original K100 wheels and swapped them for a set of R1100GS spoke wheels, which were then powder-coated in a matte grey concrete colour and wrapped up in Metzeler Roadtec tyres.

The beautiful belly pan was an original BMW unit that used to be supplied by the Bavarian factory. As for the tank, Donovan decided to keep the K100 stock fuel tank but added a Monza-style tank cap. To finish the bike off, all the bodywork was painted in Norda Grey with underlying blue metallic flake – which, when the sunlight hits it, gives a dash of dazzle.

Donovan and his team at Cytech have created an immaculate K100 café racer, with every inch of the bike being upgraded or modified to make it perform and look better. “Even though the photos came out awesome, seeing the bike in person is on another level and the sound is even better,” says Donovan.