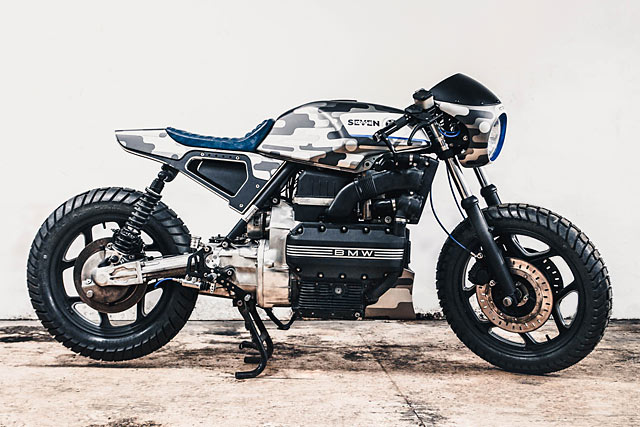 Think you love custom bikes? Then consider the work of Poland’s Jacek Mulak. After spending most of 2017 considering whether or not to close his business and ‘get a real job,’ he went the crowdfunding route to try to raise some capital so he could continue working. As Europe descended into one of its harshest winters in years, Jacek began to realise that the crowdfunding project was, as he put it, ‘A disaster.’ His solution? He put everything aside and did what he loves best; he braved the cold and the despair and built a cafe’d BMW K100 that’s arguably Cardsharper’s best custom yet. “Let’s skip the part about my shop,” says Jacek, half jokingly, half serious. “You know how things are with me. This may well be the last motorcycle I will ever build.” For those not in the know, Jacek’s shop, Cardsharper Customs, is located in Lublin, in Poland’s east on the Bystrzyca River. The city’s average January temperature? A balmy -1°C/30°F. “And the shop’s crew is just me.” And if you’re thinking that there’s something a little different about this particular flying brick, it’s probably because it was a hybrid of sorts even before Jacek got his cold little hands on it. “Basically, it’s a BMW K100 LT from 1990, but the gas tank is from a K75 which was the way the client originally bought it. I like the lines of the K100 tank, but the K75? Not so much. I realised that one option was to hide its shape, and the idea of using some sort of camouflage looked more and more like a good idea.” Like always, the client was keen to let Jacek know what he wanted in detail, bypassing the opportunity to collaborate and  try something a little different. “He quickly put some photos of custom BMW K100s on the shop’s table; clearly he wanted some kind of internet-based custom build.” Damn those trendy custom bike blogs. “Eventually, I asked him to let me design something that would be new and different to what had come before.” Thankfully, the client agreed and the build was on in earnest. Jacek was quick to point out that he isn’t a big fan when it comes to the looks of BMW’s K100 subframe, so he decided to remove it completely and design a new look. “The truth is there is a steel subframe on the bike, but it’s hidden under some new aircraft-grade aluminium panels. The seat, electrical box, and the whole tail section is designed so that you can simply cut part of the frame, weld on a new section and everything still fits.“ The new seat is removed by loosening one lonesome screw and the tank and seat pan is magicked away by removing two more small bolts.

[superquote]“There is a steel subframe on the bike, but it’s hidden under some new aircraft-grade aluminium panels.”[/superquote] “The electrics were very hard,” says the guy who’s clearly not used to taking the easy option. “I’m not an electrician, so a few people came to ‘help’ me out. It was a very frustrating part of the process: some were careless, some didn’t know what they were doing. At all.” But finally it was sorted and the cafe racer now has a new speedo, tacho, gear indicator and all the necessary lights and indicators. “It also has some custom-designed controls and a keyless ignition,” adds Jacek. “Despite what people may think, it’s easy for me to design the overall shape of the bike; what I can design and do myself is always the easiest part. The hard part is always what I can’t do. The things I have to rely on other people to do. And if those people don’t pay attention to the details that really matter to me, well…” “I always see a custom motorcycle as a whole, not a bunch of different accessories. I like the overall line and stance of the bike looking beefy and consistent. With a little more budget from the customer, I would have added some upside down forks but for me it’s pretty close to perfect.” The paint scheme was designed by Jacek to match his vision of the motorcycle. “It complements the BMW’s lines and downplays the K75 tank while not taking too much attention away from the motorcycle as a whole.” But in the end, was the client happy with the racer? ‘A key part of the building process is to convince the client of your vision, to assure them that you are sure that something that he has never seen will be much better than copying others. I think in this case, I succeeded.” Amen to that.