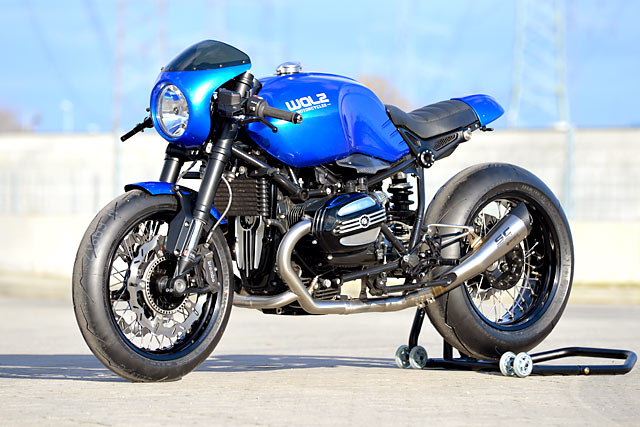 The rather edgily named ‘Schizzo’ series of builds from Germany’s Walzwerk Racing were intended to show just how changeable the BMW R80 and R100 monolever bikes can be. You name the style, the bike can probably handle it. With the shop pumping out a massive amount of these bikes in 2017 alone, it’s probably fair to say that it has been a big winner for them. But what would it look like if they gave an R nineT the same treatment. This is what. “Everybody knows that we are not committed to any particular motorcycle brand, says Waltzwerk Racing’s Marcus Walz. “But in 2017, we’ve built over twenty of our Schizzo Beemers, which makes it a bestseller for us. Many people have asked us why we don’t built something similar, but based on a R nineT. So what we did is to develop a modern interpretation using a R nineT as a base. We had it on display at the custom bike Show in Bad Salzuflen last weekend, and it was a huge success; the first example was sold right there at the show.” As for the specifics, the donor bike was a 2016 BMW R nineT that Marcus had bought from a friend. “He deals with second-hand BMW parts, so he gave me the chance to trade in all the spare parts we had left over from the past 20 bikes we’ve built to help cover the purchase costs.” Marcus classes the bike as a kind of contemporary cafe racer. “I guess it’s what you get when you cross a cafe look with a modern, high-tech bike,” he notes. And as with all of the Walz bikes, there’s a healthy dose of racetrack know how thrown in for good measure. “Like on all of our performance bike builds, we always try to improve their stats. So in this case, the first thing was to take off some weight by using lighter parts. Next came the suspension. In this case, we used a Wilbers monoshock and their progressive fork upgrade kit.” While they were at it, the front end was lowered by about 15mm to give it a more aggressive stance and to bring some weight bias onto the front rubber. Marcus then designed a new bolt-on rear frame to hold their nifty little cafe racer tail which is handmade out of 3mm aluminium and equipped with two integrated LED rear lights. “The seat is made in-house and we designed a new front fairing with a tinted screen. The prototype was made from aluminium, but the parts we sell are made out of tough ABS plastic.”

“We also upgraded the brakes with some Braking wave rotors and racing pads. A Power Commander was used to create a unique map, helping the new SC-Project exhaust system and the K&N filters pump out around 115hp at the rear wheel. LSL supplied the pegs, levers and bars, with a front fender from Rizoma and valve covers from RSD.” And when Marcus needed a dash, he naturally chose the Motogadget Motoscope Pro. At the end of the process, the bike was popped onto the scales; a mere 195kg was the result. “When we build bikes like this, we are always thinking about how the bespoke parts can be mass-produced later using modern manufacturing methods. The end result is that most of the main parts on this bike, like the headlight, fairing, seat and tail section will be offered in a factory kit form for the DIY crowd.” The bike’s new tail is clearly a Walz favourite, “Mainly because it is different from the cafe racer tails we normally use. This one is integrated into the shape of the seat rather than sitting on the seat. I’m pretty sure that it will be our best seller for 2018.”