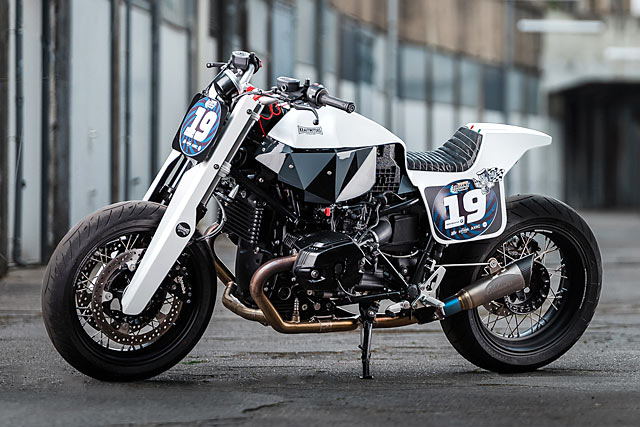 In the world of custom motorcycles, perhaps the only thing as interesting and as eclectic as the machines themselves are the people who build, buy and ride them. A more diverse group you are unlikely to find, and one of the leading characters who manages to still stand out in such a crowd is Mr Krautmotors. Rolf Reick to his parents, the head honcho of Germany’s Krautmotors. From organising events to building electric drag bikes – he’s done it all. Now the man with the big personality has built a special bike to match his changing moods; by the end of the year it’ll have worn at least five sets of clothes. It’s a BMW R nineT called ‘Little go Beep’ that can transform from cafe racer to tracker in the blink of an eye. For those regular readers of Pipeburn you’ll know Rolf as the owner of an incredible 1937 BMW R5 drag bike that he built as he tells it “to take part in a race I invented a few years ago and organise ever since. The race is called ‘Starr Wars’ – a sprint race solely for bikes with rigid frames.” Its all part of the Sultans of Sprint travelling circus that works its way across Europe each summer; but it turns out racing just one bike wasn’t enough for our man Rolf. So to compete in the hotly contested ‘Factory Class’ races, a helping hand from BMW saw this 2017 model in his shop. But while sitting in the Krautmotors HQ he had a genius idea, “There will be five races this year and during every race the bike will be presented in a different design and look. Not just in a different colour, but also with a different Monocoque.” Rolf continues, explaining the rationale. “To have something different for each day and mood, just like you can change your pants you can put on a different Monocoque on the bike to create a different look. The goal was to be able to do this fast and without mechanical skills.”

[superquote]“There will be five races this year and during every race the bike will be presented in a different design and look.”[/superquote] With the new BMW on the shop lift Rolf had his mind on keeping costs down and that meant making as few modifications as possible to bikes basic architecture. The one change that had to be made was to fabricate a smaller subframe so the full range of designs planned would fit. From the top of the centre-post back a shorter and narrower piece now provides the tail end support. It was also decided that the factory airbox would remain in place and each design could show off as much of the mechanical package as best fit the brief. The initial Monocoque Rolf chose to create for the first round of the racing season at Monza was the modern tracker interpretation. With the top of the gas tank featuring a long smooth curve towards the rear and classically styled knee dents it takes on a Norton Commando like aesthetic. But start to move down the sides and the covers take on a geometric shape that infuses the old and the new. Even the details mix things up with the exposed air intake of the modern fuel injected lump contrasted by the very classic Monza filler cap.

Moving rearward the tail-piece that maintains its connection to the tank cover has a very new bike appeal, the tracker lines are certainly there but they aren’t without the influence of the edgy KTM RC8. But the traditional is never too far away with the side number plates and front piece, both a perfect tip of the cap to flat track racing and just the right place for Rolf’s race number. The front forks move things back to the future with the blade like covers disguising the conventional suspension design. Firing Little go Beep down the Monza 1/8th mile is the ever reliable BMW boxer engine with 110hp on tap. But in a 200m dash as run in the Sultans of Sprint series its torque that triumphs and a factory figure of 116nm puts it on par with a modern Honda Fireblade Superbike at half the rpm. To gain more top end performance and reduce weight a beautiful stainless steel exhaust has been fitted up with a slash cut carbon end can from Edelweiss Motorsport. For the Spa round of the racing series, the single piece white bodywork with Italian flag accents comes off with just a few bolts, lifting with it the black leather seat with white stitching. Then just as easily as it was removed goes on the second incarnation of the year with a Cafe Fighter style Monocoque design now gracing the BMW chassis. Some probing by Pipeburn’s own Marlon Slack also got Rolf thinking about a production run of kits, “it would certainly be a great idea and in my opinion the custom market could use something like that.” Just what the next transformation of the Little go Beep racer will be is anyone’s guess, the only limitation the imagination of Mr Krautmotors’ mind. But even an insight into his company’s name gives a clue that it could be anything. “It was actually more of a joke to be honest. Back in the day, the Germans took Sauerkraut with them when they travelled by sea as a source of vitamin C. Then during WWII the Americans called the Germans Krauts, and I thought it would be funny to partly use that name. I kind like to joke a bit about myself sometimes, that’s why I integrated that name.” So don’t rule out even the craziest idea from the man who brings a hell of a lot of fun and personality to a scene in which he plays an important role.