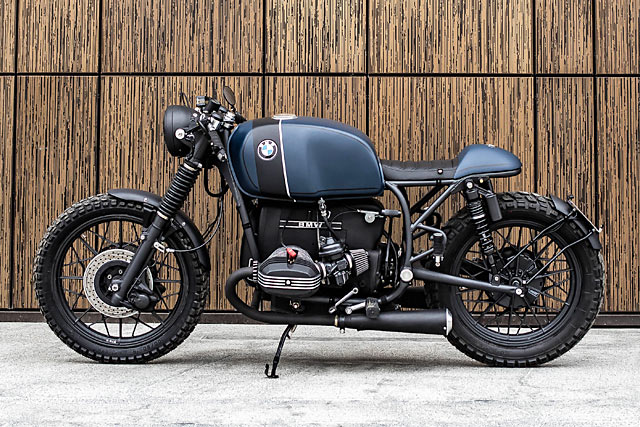 At Pipeburn we’ve seen more stripped-back airheads than a college quarterback. So it takes something special for our jaws to truly hit the floor. And this, a 1976 BMW R100 by Belarusian shop Recast Moto, is pretty damn special. Recast are huge fans of the R series. “They’re classic airheads that have passed the test of time,” head of the shop, Matiz Lemark says. “The simple and reliable design of the boxer engine makes it a good donor that will run for many years”. 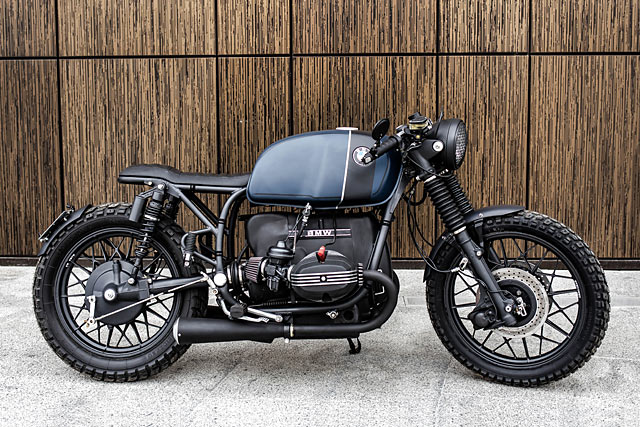 But he’s also quick to acknowledge the problem in building a kickass boxer. “There’s so many unique BMW’s which makes it hard to compete design wise or in individuality,” he adds. “The task is not to repeat anything and get something new and classic”.

So when a customer approached Recast wanting a custom bike, any custom bike, they knew what they wanted to offer up as a donor. And they knew it’d be a challenge. “The client wanted a motorcycle for the city, something that can do short trips with the ability to take a pillion,” Matiz says. 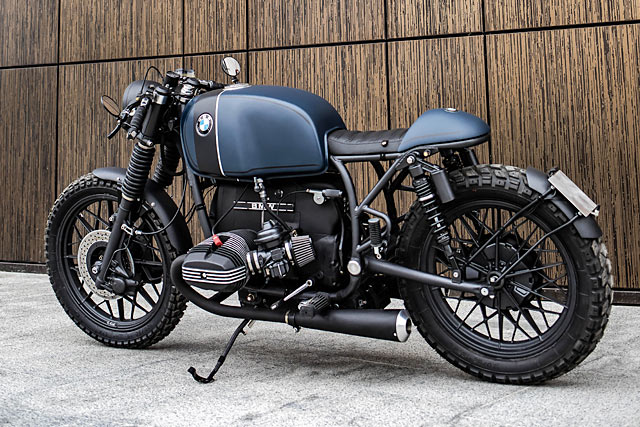 As is often the case in Eastern Europe, the team at Recast had to look westwards to try to find the basis for their build. They struck gold in the Netherlands, at a workshop that specialises in BMWs. They had a customer trying to pass off his old R100RS for a damn good price. But there was a reason it was cheap. 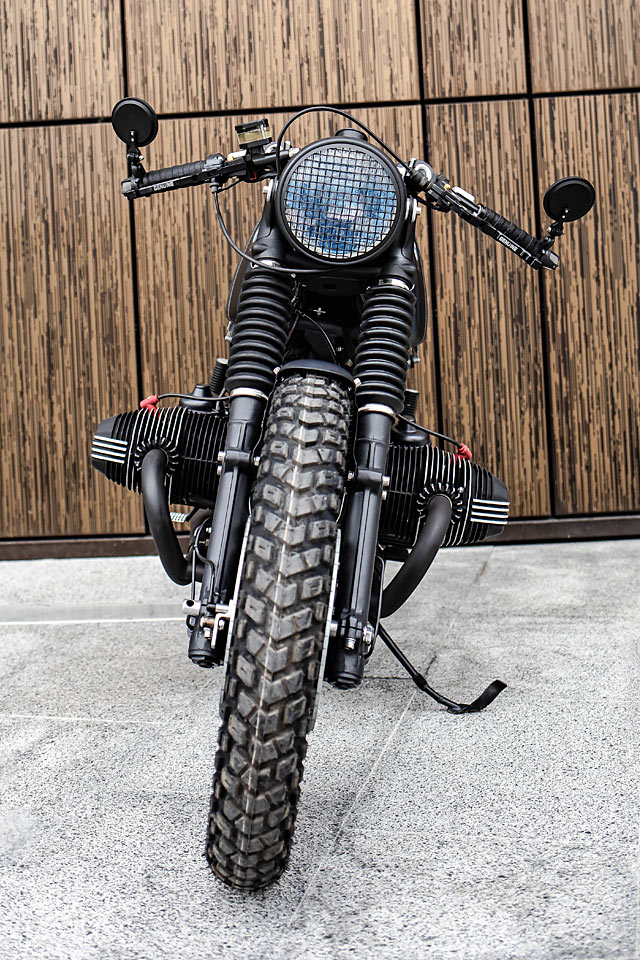 “It’d been converted into a chopper,” Matiz recalls. “You have to imagine it. The rear part of the bike had been redone completely, it had low shock absorbers, high front forks and the typical handlebar arrangement. The electrics were also damaged. It wasn’t perfect, but it was exactly what we wanted. We don’t cut stock classic motorcycles.”

[superquote]“It’d been converted into a chopper,” Matiz recalls. “You have to imagine it.”[/superquote] 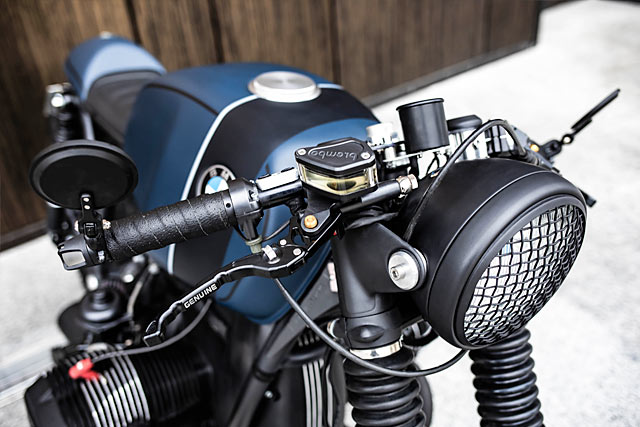 From there Matiz hit the internet, reviewing everything that had been done with airheads before. What worked, what didn’t work. What had been done and what hadn’t been done. Then they turned to the tools, cleaning up the electrics, changing the fork seals and getting the bike in a good running condition. 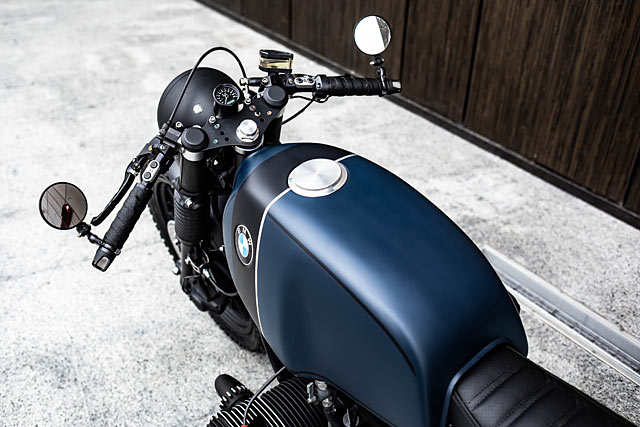 Then Matiz chopped the rear frame, adding a seat with a cowl that can be removed without turning a single screw. They built their own clip-ons and controls, a gas tank cap and a new exhaust system. The ol’ BMW runs Heidenau K60’s dual sport tires.

So far it’s all shaping up to be a damn nice build, but it’s the paint that really sets the R100RS apart. “It was decided at the very last moment,” Matiz says, “It was inspired by one of the projects in the book The Current: New Wheels for the Post-Petrol Age. It was originally by the Morgan Motor Company’s electric EV3. 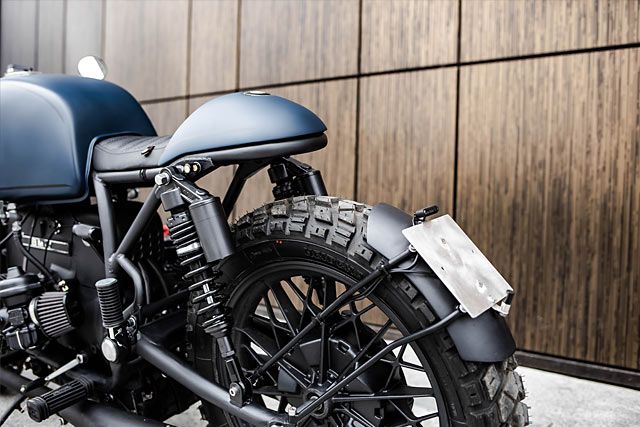 “It’s a pleasant velvety dark blue acrylic under matte varnish, and we think it looks decent,” Matiz says, with typical understatement. To our eyes it looks absolutely fantastic, and it helps tie together one of the most cohesive builds we’ve seen in 2018. 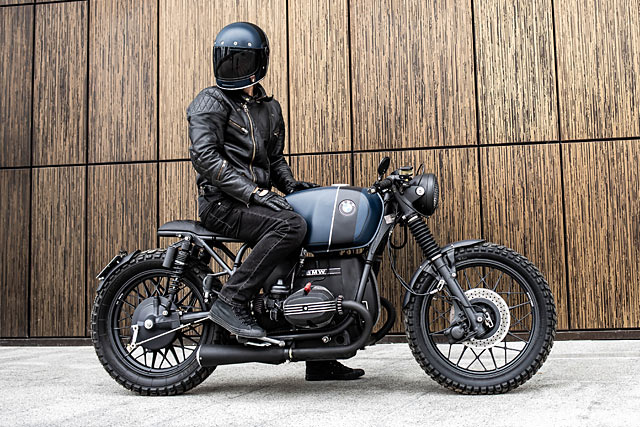