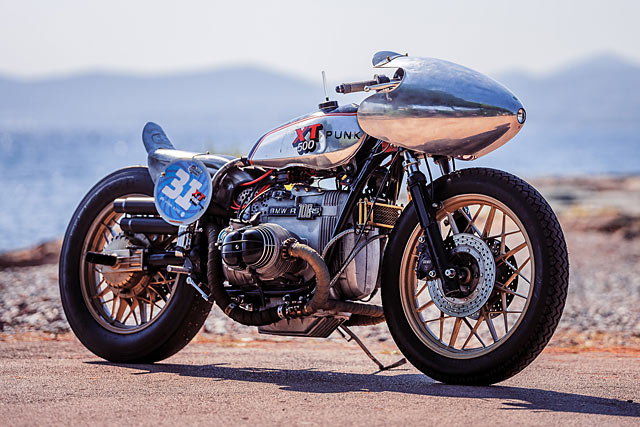 Interested in building yourself a sprint racer? If your brain works anything like Germany’s Jo Hecht, then here’s a handy set of instructions for you to follow. Take one 1978 BMW R100R RS. Add an aircraft’s propeller spinner, a Yamaha XT500 tank, a Porsche RS spoiler, a Harley fender, a bunch of handmade aluminium parts and then mix it all together with equal parts deft technical know-how and snarling Sid Vicious attitude. Then bake it in the heat of an eighth mile sprint race and hey presto! Here’s one he prepared earlier. 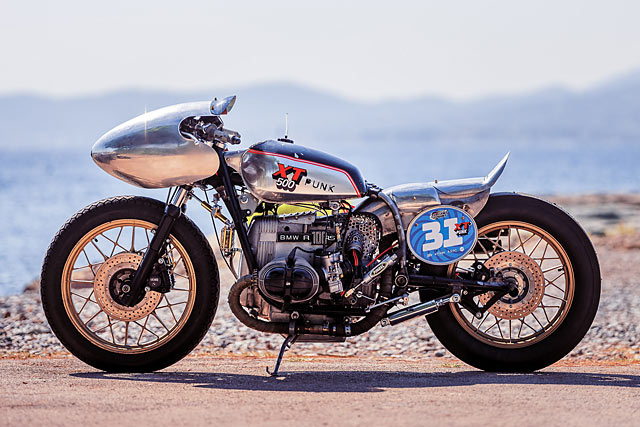 Based in the south of Germany, Jo was born in 1970 and went on to study a Masters of Industrial Design in Milan before taking over the family’s interior design business with brother Frank. “Then in 2016, I created ‘Gasoline Culture’ as an online retail idea to sell stickers, hats, t-shirts and the like. Embarrassingly, it’s still not online.” And with customs like this, we wonder if his time is better spent on bikes than bytes. “Since I was a small child, I was always into racing. Cars, motorbikes; pretty much anything with a cool design. So for the last few years, I’ve been building myself different custom bikes.” 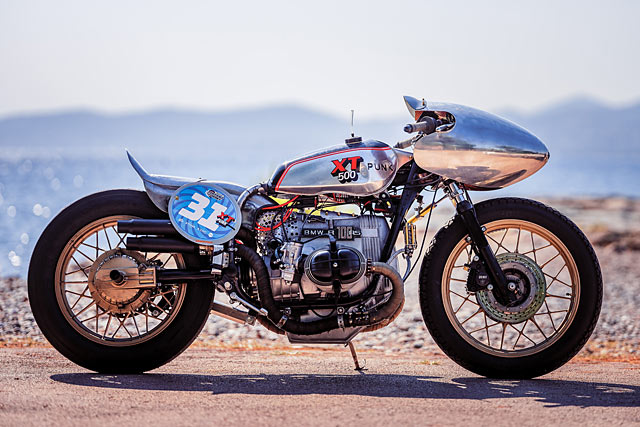 After a chance encounter with Mr Seb ‘Sultans of Sprint’ Lorentz in Biarritz 4 years ago, he was immediately impressed by the performance of Seb’s old BMW-powered ‘Sprintbeemer’. So not wanting to reinvent the rad, he decided to use the very same litre engine as the base for his build. “Afterwards, I was looking for an old Beemer for about a year before I found a ‘78 R100RS close to my hometown in Stuttgart.’ It’s important to note that Jo comes from Porsche’s heartland; it explains one or two of his automotive obsessions rather well. 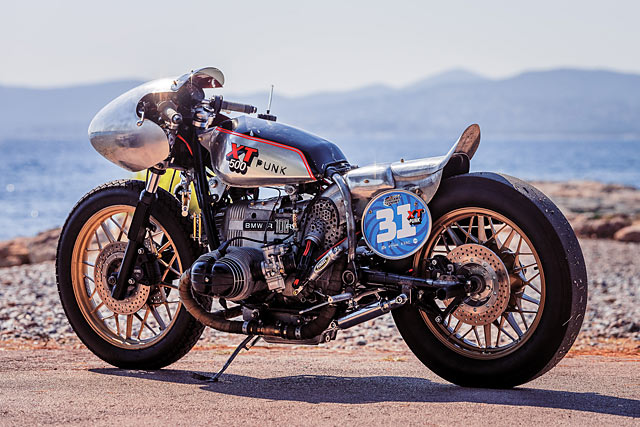 “I had my heart set on an impressive fairing made from aluminium, so I found an old airplane part which was perfect in its form and it would also do a great job of hiding all the instruments and cables inside. The tail on the back is inspired by the old Porsche Carrera RS ‘Entenbürzel’ or ‘Ducktail’ spoiler, so in a way it is a BMW ‘RS’. Another big inspiration was my long-term love of the Yamaha XT500, with its iconic aluminium tank and golden wheels.”

“The building time was around a year and a half, mostly because it was done as late night screwing around after a full day’s work. After receiving the BMW, Jo ripped pretty much everything away, so there was only the frame, the engine, the wheels and the forks left. “The idea was to build a street legal bike with the option to race it, like the Porsche RS.” 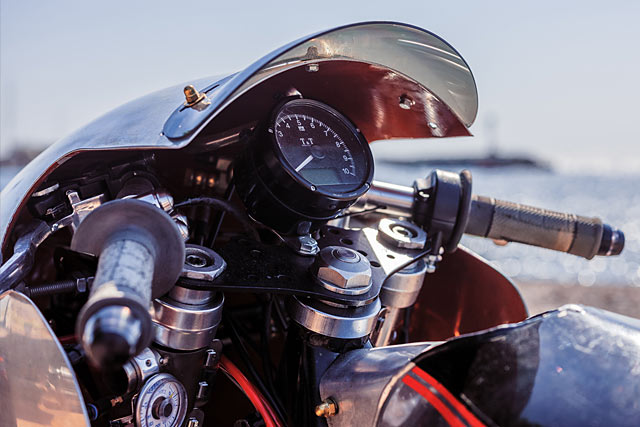 [superquote]“It was designed for a 3-bladed propeller, so it had 3 cut-outs which matched exactly to the bike’s ’bars.”[/superquote]

After collecting a bunch of parts including blinkers and lights and a raft of other eclectic paraphernalia, Jo tried to find a nice aerodynamic fairing for the bike that would also allow him to add a light in the front. Surfing the web, he somehow stumbled across an aeroplane’s ‘spinner’ – also known as ‘the pointy part in the middle of a propellor’ – which was perfect. “It was designed for a 3-bladed prop, so it had 3 cut-outs which matched exactly to the bike’s ’bars.”

“After the fairing was fitted, I added the light and used the rest of the internal space for the bike electrics and other tech. For more of an XT look, I put the exhaust on the bike’s right hand side and raised it up a little. At the back, I used an old Harley fender and a handmade aluminium tail for that typical Porsche RS spoiler look.” The engine is powered by another famous Stuttgart brand, namely Siebenrock. Jo says it has around 90hps when angry. “You can ride and shift it normally or by using the Pingel airshifter. The suspension is on the left side and I used a Harley progressive shock. The rear tyre is a special drag racing slick from Racemaster.” 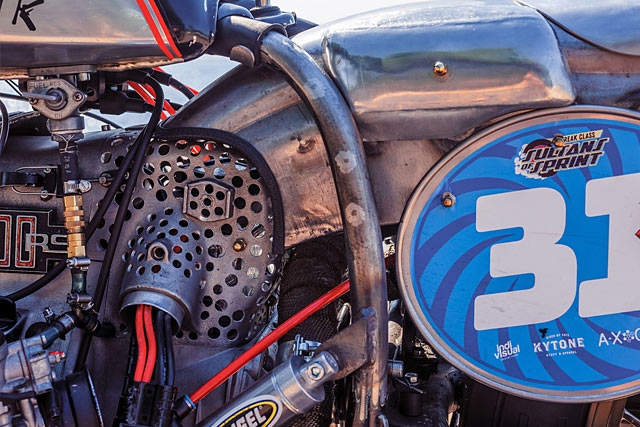 “One of the tricky things was mounting and wiring of the fairing without drilling holes in it; notice that you can’t see how it’s fixed. Another difficult thing was the routing the exhaust system. To have it go up and to the right side without blocking other key parts of the bike was a real headache.” 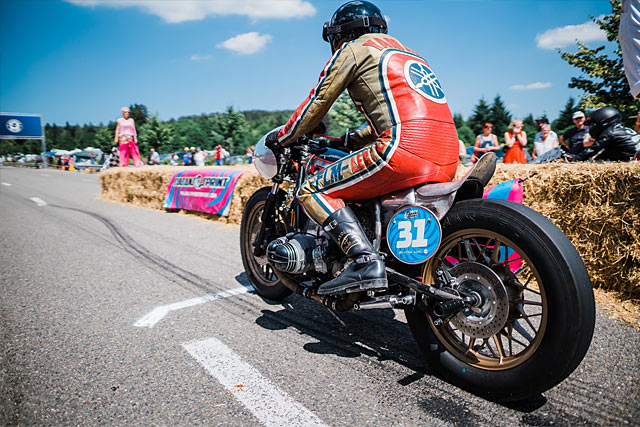 “There’s not really one thing I like about the bike, it’s the whole bike: the spinner fairing, the Porsche tail, the golden wheels, the XT gas tank, the handmade aluminum parts and plenty of other cool little details. The bike is me, really. Stocked with my childhood memories of racing, performance and fun all reunited in a cool sprint racing bike. It’s awesome.” 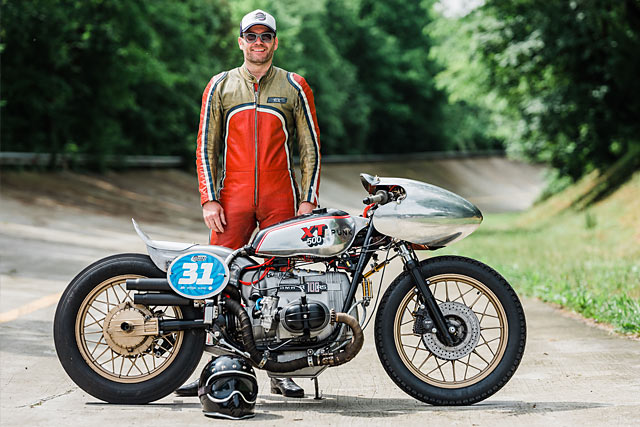