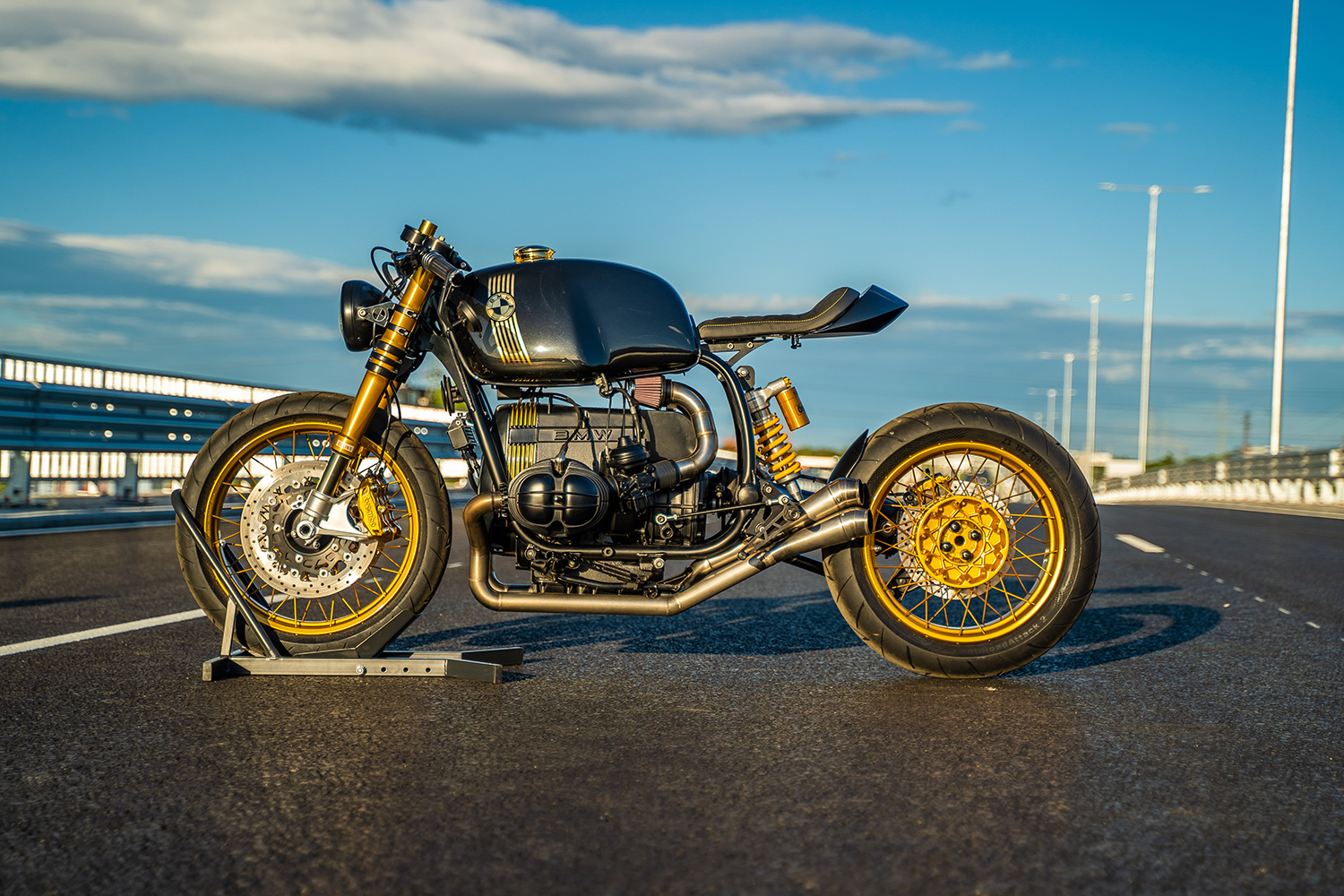 There are primarily two types of street-fighter builds; projects stemming from crashed superbikes after their bodywork is thrashed; and purpose-built nakeds that are engineered from the ground up in an effort to create something special, rather than trying to achieve a presentable ride while spending as little as possible on the heels of a wreck. And while to a slightly lesser extent, the same is true for cafe racers, with some, simply gaining clip-ons and a new tail section whilst others are meticulously calculated and largely crafted from scratch. Even upon first glance, it’s abundantly clear which path Bulgarian customs outfit, Tossa R took when piecing together its latest one-off work, “The Gold Digga.”

This heavily modified airhead began life as an R100, though is now a far cry from the stock machine. “The project was made for a customer in Malta that had noticed our Yamaha XV750 build that we had done and he decided to place a custom order for this bike,” the shop tells us.

While Tossa R had some ambitious plans regarding the BMW’s visual redesign, the Balkan bike building outfit started their efforts by honing in on the rolling chassis and treating the several-decade-old donor to a host of contemporary upgrades in a bid to massively bolster performance. This was achieved through the addition of an inverted Ohlins fork slotted in triples from an 1199 Panigale and an equally top-shelf monoshock also supplied by the world-renowned Swedish suspension specialist. This, however, only marked the first of several phases to modernize the R Series.

“The most challenging aspect of the build was the 3cm (1.18”) difference between the front and rear wheel — a detail most other shops don’t remedy and leave as is. We ultimately managed to align them by modifying the frame and then making a new driveshaft before finally modifying the swingarm,” explains the Bulgarian builder.

What’s more, Tossa R has also gifted the R100 the rear arms and final drive system off of a BMW R1150GS, as well as the Bavarian adventure bike’s rear rim. The stocker’s original dual-cradle chassis has also been modified, having been de-tabbed before receiving a super minimalistic subframe that would eventually support the build’s single-rider seat — a trait that’s increasingly become a Tossa R hallmark. With the frame, wheels, swing-arm, and suspension setups all sorted, the shop set about installing high-end braking hardware, selecting an all Brembo twin-disc four-pot caliper arrangement in front and a single rotor bit by a dual-piston caliper out back.

After undergoing a fairly extensive refresh, the overhauled 980cc air-cooled Boxer twin was fitted with a custom full stainless steel exhaust system that’s supported via one-off brackets and culminates in a stacked pair of GP-style silencers. The build’s blacked-out Bing carbs also now inhale through a custom intake system with a symmetrical set of forward-facing pod filters sandwiched between the top of the engine and the bottom of the tank. These new respiratory bits not only allow Tossa R to squeeze more power from the mill but also result in a markedly deeper and more baritone exhaust note.

Next, the team tackled the build’s seat and rider’s triangle. Perched atop the stubby subframe is a lightly upswept custom black leather saddle with gold piping that matches the contours of the short cowl piece that caps off the back of the tail. Aside from the aforementioned cowl, the only other new piece of bodywork introduced on the build would be a sliver of a rear fender, as the stock tank remains in play. With the seat height dialed in and installed, Tossa then added a pair of adjustable rear-sets and a set of TRW clip-ons wrapped in Motogadget grips and outfitted with the German brand’s m-Switch switchgear and circular drop-down mirrors. Motogadget would also be responsible for supplying the build’s Chronoclassic tachometer and m.Lock keyless ignition.

Keeping the Beemer road legal is a pair of m-Blaze bar-end LED indicators (also from Motogadget) and a pair of Kellerman micro-LED rear signals discreetly poking out from the bottom of the tail that also double as the bike’s taillight when not relaying direction changes. Guiding the way is a modern LED headlight set in a traditional circular housing.

A pivotal element of the R100’s extensive transformation was its contrasting black and gold livery. The tail cowl, rear fender, and headlight shell have all been hit with a coat of gloss black, as has the donor’s original tank, which was also treated to custom gold stripes using genuine 22 Karat gold leaf, matching bespoke black and gold Roundels, and a custom “The Gold Digga” script across its top. Directly below, the engine cover has been bestowed with a similar, blacked-out, gold-striped treatment, as well. Furthermore, the frame and modified swing-arm were also powder-coated in a semi-gloss black, juxtaposing the Gold Digga’s gold accents, anodized gold wheels, and fork uppers.

Riding on a set of sticky Continental Road Attack 2 tires and equipped with some of the finest componentry that money can buy, Tossa R’s R100 ‘Gold Digga’ build now boasts the performance prowess of a motorcycle several decades its junior, It may have required an enormous amount of effort and legwork, but when the kickstand goes up, it quickly becomes abundantly clear that Tossa R’s monumental efforts were well worth their while.