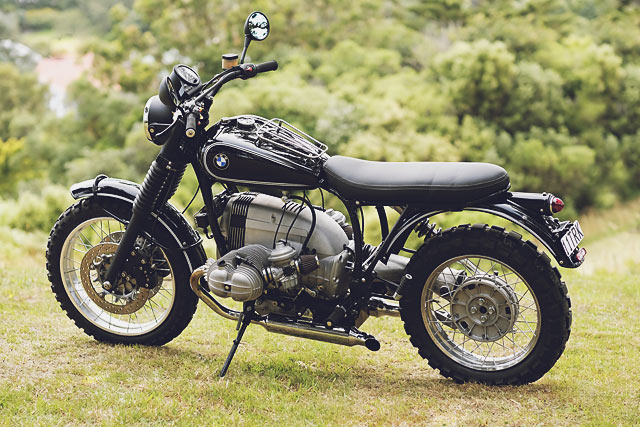 “It’s hard to say what style the bike is. Maybe a reverse restomod?” It’s a seemingly innocuous statement, but New Zealand’s Mike Dobson and his Two Cats Garage instantly had us hooked. Most of us will know what a restomod is, but a reverse restomod? Well, it’s taking a modern bike with all the bells and whistles and customising it to give it more of a classic look. Sound interesting? Well whatever the terminology, Mike, along with his mate Ken at Better Boxer Co. have just joined forces to take a nondescript ’93 BMW R100R forward to the past. Wellington’s Better Boxer Co. (a.k.a Ken Howe) has owned, ridden, repaired and modified BMW boxer motorcycles for himself and others for the past decade. And after studying product design, he’s now produced a range of BMW boxer aftermarket parts, too. Friend Michael Dobson has been a BMW motorcycle mechanic since 1978. He has spannered on several race bikes, built a few specials and now works from home in Raumati Beach, just north of Ken. The bike was picked up new from the Berlin BMW factory, a popular method of delivery that allowed antipodean customers a European moto holiday along with the (now defunct) ability to import their brand new bikes back into the country as second-hand vehicles, avoiding certain taxes. This particular bike ended up in the North New Zealand town of Martinborough for a very quiet life of pottering around the region’s vineyards. 60,000 kilometres and 24-odd-years later, Ken and Mike took possession. Enter keen motorcyclist and restaurateur Jeff Kennedy…

“The build was always guided by Jeff’s vision,” says Mike in opening. “He knew he wanted a bike that was an homage to the 1950’s, but had modern features such as disc brakes and electric start. He also wanted to make a feature of the entire BMW powertrain from front cover to final drive.” [superquote]“A Kawasaki 250 Eliminator tank was chosen. And while it might seem like an odd choice, there’s no denying how well it works.”[/superquote]

“After removing what we didn’t need, all we had to do was vapour blast the engine, set the lines and reassemble. How hard could it be?“ We detect a touch of modesty. “There were some obvious features that were compulsory; the black bodywork with the double white pinstripe, a smaller headlight, bigger mudguards and the hidden battery.” Looking for a tank that brought the whole bike together, a Kawasaki 250 Eliminator unit was chosen. And while it might seem like an odd choice at first, there’s no denying how well it works.

Jeff was involved along the way, mainly as a sounding board for the boys to bounce question off. “There were many nights of us asking, ‘Jeff, where do you want the guard cut? and, ‘Jeff, which tail light do you prefer?’ and, ‘Jeff, black brake lines or silver?‘ ” “It was quite an easy build; there was nothing that was really difficult,” says Mike. “Jeff wanted some Continental TKC80 tyres, which meant that we had to fit a 19″ front wheel, which was no real problem. The two rear mudguards needed welding together to get what we wanted and the Kawasaki tank needed a few small mods, but nothing too hard. As always, hiding the electrics can be challenging but by now we know a few tricks.” Looking at the details, there’s also an original BMW speedo in a water-jet-cut custom mount, Hagon rear shocks, a Lucas red beehive glass brake light with a replica BMW housing, Tarozzi pillion pegs, Motogadget m.blaze pin indicators, and a beautifully chosen Triumph tank rack. Damon at local shop Cycleworks fabbed up the exhaust and steady handed Kurt from Kurt Goodin Artworks did the pinstriping. And of course, there’s a bunch of Better Boxer Co. bits on their, too. “It rides really well and feels lighter and lower,” Mike says, clearly happy with all his hard work. “It also gets a lot of positive attention. All three of us like the way the entire powertrain looks like a complete unit. It is all there on a standard BMW, but hidden. Creating space and adding daylight has exposed it quite nicely and the Better Boxer Co. ‘Fastback’ starter cover gives a very clean line to the top of the engine. Most of all we like the fact that Jeff is really happy with it. Job done.”