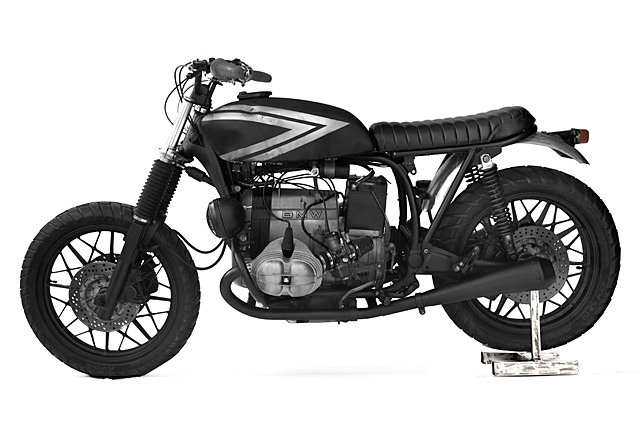 Goddamn Steve McQueen. There – I said it. Am I jealous? A little bit. But mostly I’m confused. Just how does one single, solitary guy amass so much coolness in one lifetime? The stunts, the flying, the racing – but mostly, the bikes. And especially the desert sleds. It’s almost as if he was bored one day and decided to invent his own genre. Talented bastard. Clearly Anvil Motociclette agree. Obviously this isn’t the first time that a build has been influenced by the Big Mac, but we’d wager that it’s never be done quite like this. Here’s the Milano duo’s latest – their sled-inspired BMW R100RS ‘Arsenica’. “We got to thinking…” says Anvil’s Marco. In my experience, that’s never a good thing for a motorcycle-riding male… but I digress. “We wondered if the friendship between Steve McQueen and Bud Ekins in the mid ‘60s had happen in a BMW dealership instead of a Triumph one, what would have changed, bike-wise, in the desert heat all those years ago?” If the story we know bears any resemblance to the truth, Steve encountered some off-roaders one Sunday off of Sepulveda Boulevard and got to talking with them. Somewhat bemused by their claims of off-road prowess, he was soon to admit that their skills, along with their strange-looking bikes, we capable of things he simply never considered. So the very next day, Steve dropped by Bud’s Triumph dealership and got to ordering some bikes with a few choice custom options. “If McQueen had taken our ‘Arsenica’ for a ride, we hope he would have been even more excited. It’s a big claim, but we feel we just might have an edge. Basically, we took a BMW R100 RS from ‘82 and a whole bunch of inspiration from the ‘Desert Sleds’ used in the Mojave races. Then just add some super-modern details to this retro approach, like an irregular geometric design on the tank, the Accossato pump on the front brake and a modern floating rear disc. And hey presto…”

The boys took off the original central headlamp and replaced it with two tractor headlights – one on each crash bar. Then the rear part of the frame was reworked to make it shorter, linear and more sturdy, thanks to the modern power of stainless steel. The ‘bars were given a typical 70s form factor, which is more often than not used for flat trackers. “The air box was replaced by two cone filters, giving a whole lot more air to the engine. The burnt gasses were then ejected via a wide open muffler.” At least that’s what we think they said – it was quite hard to hear them. “Getting down to the real soul of the bike, we also changed the original carburetors with two new Dell’Orto 36″ units, complete with an accelerator pump, which transformed the docile tourer into a kicking, screaming desert beast!” Like all of Anvil’s bikes, the scars of time are well and truly present. In Arsenica’s case, it’s the rusty and beaten-up Kawasaki S3 tank that looks like it’s been nicked straight out of the dust of a Californian desert ride. Talk about gilding the lily. I guess we can probably chalk up another one for the Milano pair’s track record, then. If you like what you see and you think you could handle some more matt black and Italian devil worship in your lives, then make sure you click on over to their site and take a look. I they ask, just tell ’em ‘Steve’ sent you…