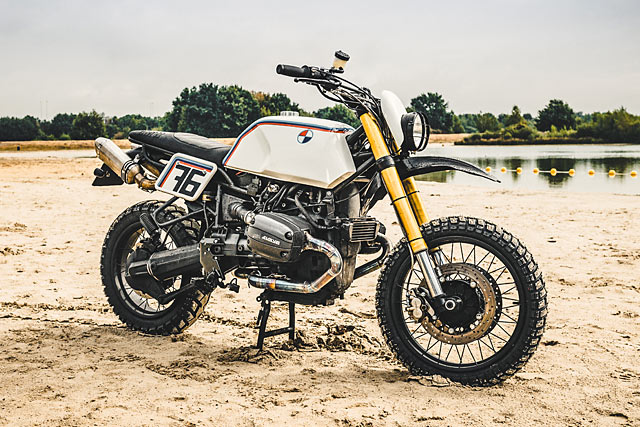 What do you get when you take a big serve of America’s world-class automotive obsession and crossbreed it liberally with the Mexican tradition of going loco and not giving a damn? Why, you get Baja – that’s what. Mother of countless cool off-road trends, the Baja 1000 was founded in 1967 by American florist Ed Pearlman and it has gone on to tickle the fancy of bike, car, truck, ATV and buggy fans alike. And it’s not just the Yanks that worship at this Temple of Sands. The Netherland’s Moto Adonis are also down with it, proven by this rather rad ‘MAD Baja 1100’ BMW R100GS motorrad. 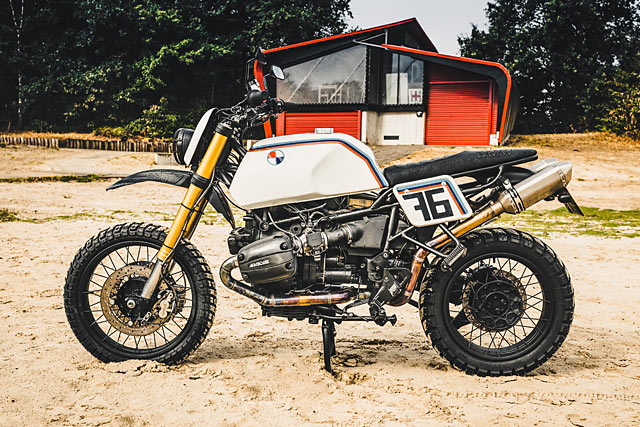 Dutch Porsche freaks RSM Projects usually build some pretty awesome Deutsch customs. Clearly harbouring a secret BMW obsession, the shop approached local custom bike powerhaus Moto Adonis and its main man Daan to scratch their red, white and blau itch. “They came to us to produce a unique scrambler which could handle some real off-road stuff. And he also needed it to be a BMW – which he said was his personal favourite moto brand.”

Speaking of favourites, Daan tells us that he considers this the best handling bike that Moto Adonis have ever produced. “The idea behind our custom bikes has always been to build a great handling bike with improved performance and of course to give them a new, more modern look. Since the beginning we have been constantly developing, refining and collecting new ideas as to how we can improve the donor bike. And now, we really think that an almost perfectly handling BMW GS has been born.” 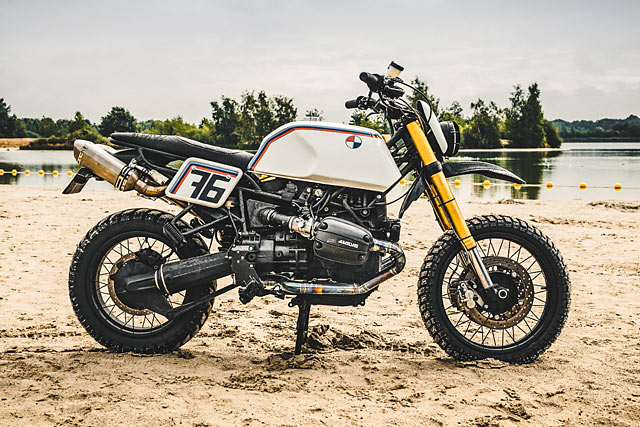 The list of mods is longer than a fat monkey’s arms and reads like a dirt lover’s wet dream. Starting with a modified frame front and rear, the Moto Adonis team restored and mounted a set of WP front forks while also adding two Brembo brake calipers, high motocross ’bars, a two-up custom rear seat and a fresh stainless steel 2-1-2 exhaust. Adding a little cream to the already tasty Bavarian moto strudel, they continued with a bunch of new LED lights, a scrambler-style headlight cover, a Koso speedo and a fresh set of Heidenau Scouts.

[superquote]“The list of mods is longer than a fat monkey’s arms and reads like a dirt lover’s wet dream.”[/superquote]

The bike is built on the R1100GS base, but should any future customers be interested in a similar creation they could also choose the more modern and technically advanced
BMW R1150GS. “The rear Paralever swing arm and shaft drive are well-engineered pieces, however the rear shocks on these bikes have usually lost their original performance, so we replaced it with a new YSS set. Similarly, the front Telelever system was a good idea at heart, however it’s got its limits when considering sharp handling and off-road abilities – especially if you consider its weight. The new gear gives the bike a lot better handling during off-road or fast cornering sessions.” 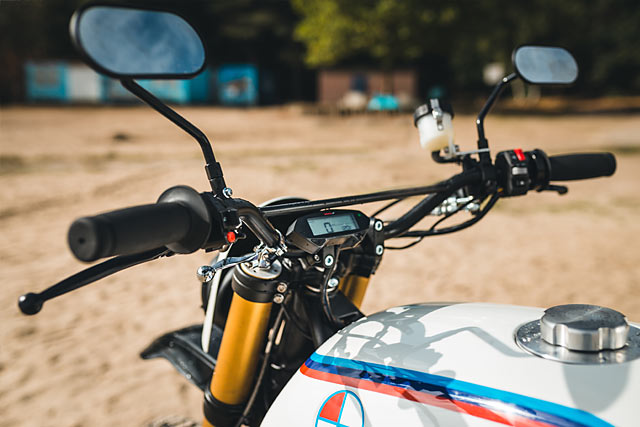 The bike also sports a completely rebuilt and refurbished 1085cc boxer donk with a new oil cooler, delivering more power and a better torque curve. The vision for the bike was always to be different, lighter and faster. Hence, the riding position had to change from the factory’s ‘Mr Rogers’ to something a little more ‘Tyler Durden’. The front forks swap helped this along, as did changing the gas tank and seat. The new K100 tank has a full 15 litre capacity, so there’s no need to accept a reduction in range for all those good looks. 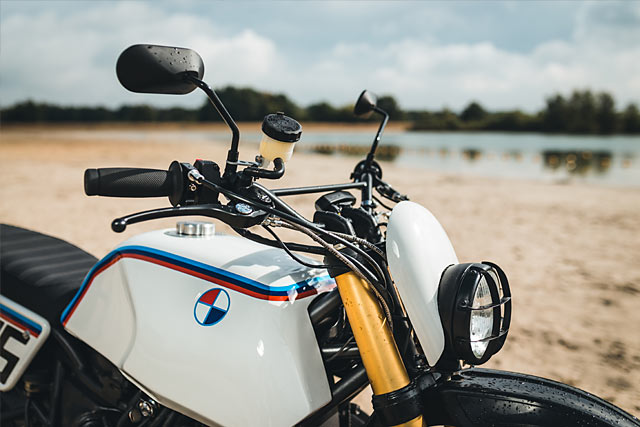 The exhaust has been modded into a classic BMW R-line style with 45mm pipes until just behind the gearbox, which gives the gasses a better flow than original. The exhaust pipes come together and rise up until just under the seat, where they then split into two pieces of 51mm stainless pipe and head on to the Akrapovic-esque mufflers. Daan says that they are quite handy in the way they can be adjusted to different levels of aural insanity and how they give the bike more torque and horsepower at much earlier RPMs. 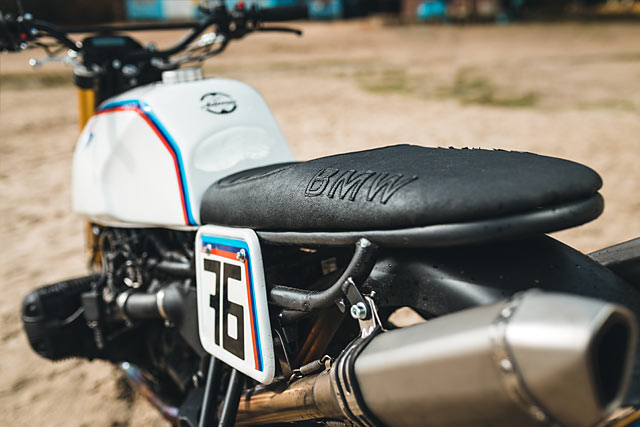 With his salesman hat now placed firmly on his head, Daan tells us that should anybody be interested in a similar bike, all the nice little bits and pieces like the lighting, controls, mufflers, paint and even the leather accents can be varied to your liking. “The electrical system can also be upgraded with a Motogadget M-unit Blue, which gives your bike the ability to be started via a proprietary smart phone application. You can also choose all kinds of custom lighting options, like a wave function in your blinkers so you can give those Audis a run for their money. It’s pretty clear that Daan has set his sights on making the ultimate scrambler, and it looks like he just may have hit the mark. More new bike than refurbished custom, Daan says he’s happy to put this bike up against almost any off-road moto this side of Toby Price’s KTM and have it stand its ground. And we’ll be getting angry emails from him for weeks if I didn’t mention that they are now taking orders on replicas and are able to ship the bad boys pretty much anywhere in the world. Get in touch with Daan if you haven’t got enough Baja sand in your pantalones already.