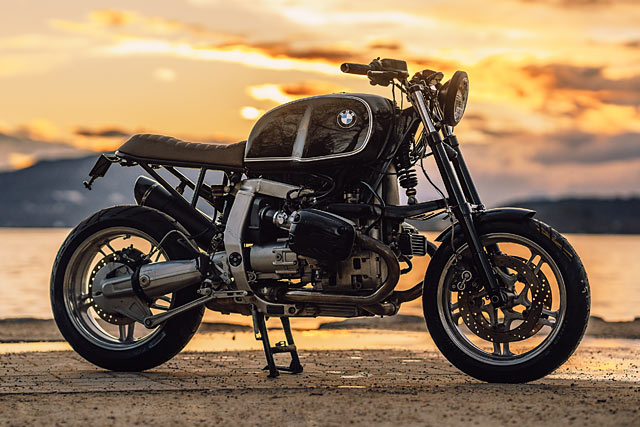 With original late 70s and early 80s BMW twins now becoming as rare as first edition Superman comics, Tasmanian Tigers or signed copies of the Gutenberg bible, builders are increasingly looking to 90s and noughties bikes as custom platforms. And while the prospect of a custom K1 may not exactly pump your pistons, it’s not all doom and gloom. Take the very millennial BMW R1100S. Sure, it’s got the wacky Telelever forks, but it’s also got the first of the modern boxer engines, a genuine 100bhp and can be had for next to nothing second-hand. And when you dump the plastics and add an old Beemer tank and some scrambler styling like Austria’s NCT Motorcycles, the end of the 20th Century never looked so good. Business owner David says that there’s is a lot going on in the NCT workshop right now. Starting 2018 with many new projects and orders, the team are clearly grateful for all the work. “As a result, we’ve started down the path of official approval and homologation for road service work. We’re trying very hard to achieve all the goals we’ve set for 2018 and I’m confident we are on track for a great year.” “This particular project was for a client who had been riding this 2001 BMW R1110S for several years; he liked its handling and didn’t really want to replace it, so he decided on a little customisation project and got in touch with us.” Electing some scrambler-style inspiration as their goal, the bike was eventually named ‘Spectre’ as an homage to the fictional evil organisation from Bond movies past and present. Yes, Blofeld would cut an impressive figure atop the bike, but where to put the cat? As the client was clearly wanting to be fully engaged with the build, the initial plans were drafted in close consultation. “He had a clear vision of the final result and was also very interested in the idea of replacing the original tank with an old one. The only thing I did was to adapt everything for the right proportions.” “As soon as the engine and all the other parts were removed, we reworked the rear frame and adapted the seat, which got upholstered by a partner company of ours who are professional lorimers. Then we adapted the scrambler’s new tank from a BMW R100 by revising the mounts and the petrol pump. After the frame work was done, it was powder coated in a slick, satin black. The engine was fully reconditioned and it also received a new exhaust with an SC Project muffler, meaning we then had to tune the carburettor to match.” The original handlebars were replaced with new, higher items and then thoroughly blinged with Motogadget grips and speedometer. The controls are still the original items as the sentimental owner with a head full of fond memories really wanted to keep a bit of the original bike intact. “But we’ve replaced the old Headlight with a LED unit and the whole bike got a new loom and electronics. The turn signals in the front are also from Motogadget.” “The final steps were to paint the rims in silver and mount two new Metzeler Tourance tyres. The original front fender got shortened and the bike was given a clean black colour scheme, just as the BMW brand history demanded. When we got all the parts sorted, our workshop manager Mario put everything together and prepared the bike for a test ride. Last but not least, we polished up everything for the shoot with Peter Pegam at the beautiful Wörhtersee Lake in Carinthia.” [superquote]“It’s very strong and athletic while also being quite narrow, meaning that the beautiful boxer engine stands out even more.”[/superquote]

“The hardest part was definitely to adapt the old BMW tank. Mounting it to the new frame and relocating the fuel pump was very challenging, but we think that all the hard work was definitely worth the end result. What I also really like is the scrambler’s look from the rear. It’s very strong and athletic while also being quite narrow, meaning that the beautiful boxer engine stands out even more.”