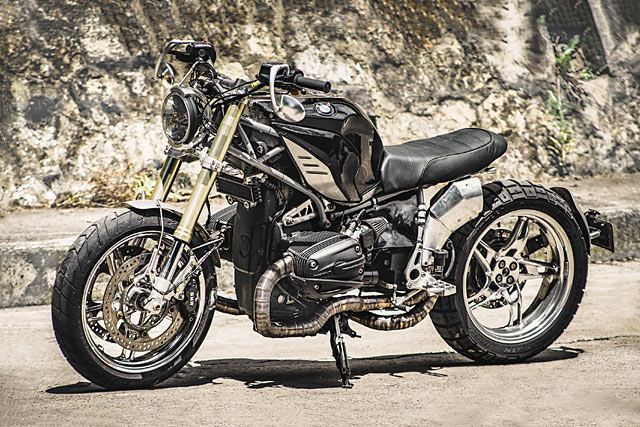 While the Roman Army had many technological tricks up their woollen tunic sleeves, when push came to shove it was their good, old-fashioned sword – or ‘gladius’ – that did most of their soldier’s dirty work. After the javelins had disrupted enemy formations and the shields had pushed them onto the back foot, it was this brutal double-edged hunk of steel that would deal the final blow. Of course, a Roman soldier’s sword was a lot more than just a killing tool. Whether it was clearing undergrowth, collecting firewood or building a bridge, the thing was nigh on indispensable. Which coincidentally, is a pretty darn good way to describe the new BMW R1150 custom from Colombia’s Pasquale Motors. 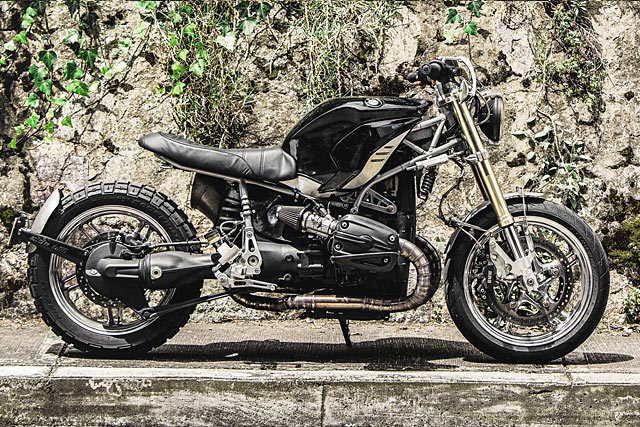 Or at least, Colombia was where the family shop started. But it looks a lot like business might be on the up and up. “Right now, our shop is going through a big change,” says brother Esteban. “I’ve moved to NYC and am working as a lead fabricator at Deman Motorsport, were I build racing Porsches. Gustavo and Gustavo senior are working on three projects in Colombia ; two BMWs and one CB550. When they finish, they are going to travel to NYC to start a Ducati Multistrada build with Esteban.” It’s nice to be able to have grand plans, isn’t it? 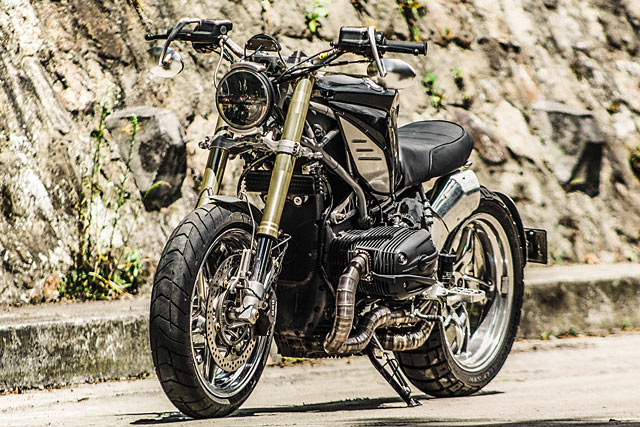 “It is our interpretation of a modern, all-rounder bike,” continues Esteban. “It’s like a standard motorcycle on steroids. The donor bike was a BMW R1150R from 2003 and we gave it the name ‘Gladius’ like the sword of the Romans. It’s something that they relied on heavily, so it had to be built to never let them down.” 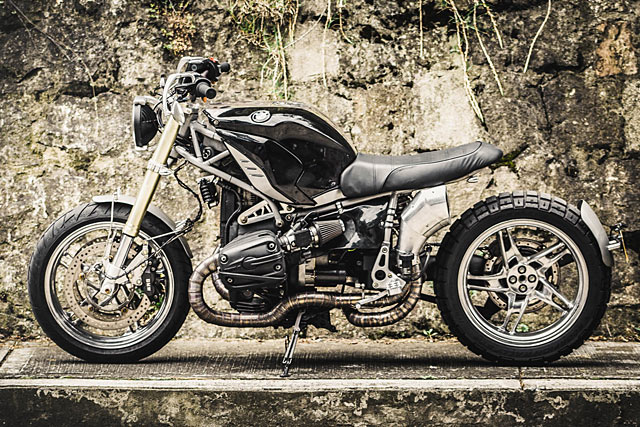 The family team’s inspiration started back when they were in California riding a Ducati Monster S4RS. More than a little impressed, they wanted to achieve that kind of performance and that level of feedback with this BMW. “In terms of the design we always believe that form should follow the functionality, so we shaped the frame to match how we saw the finished bike behaving and that gave us the lines for the rest of the build.” But their main focus was never in doubt; it was to create a more capable bike. 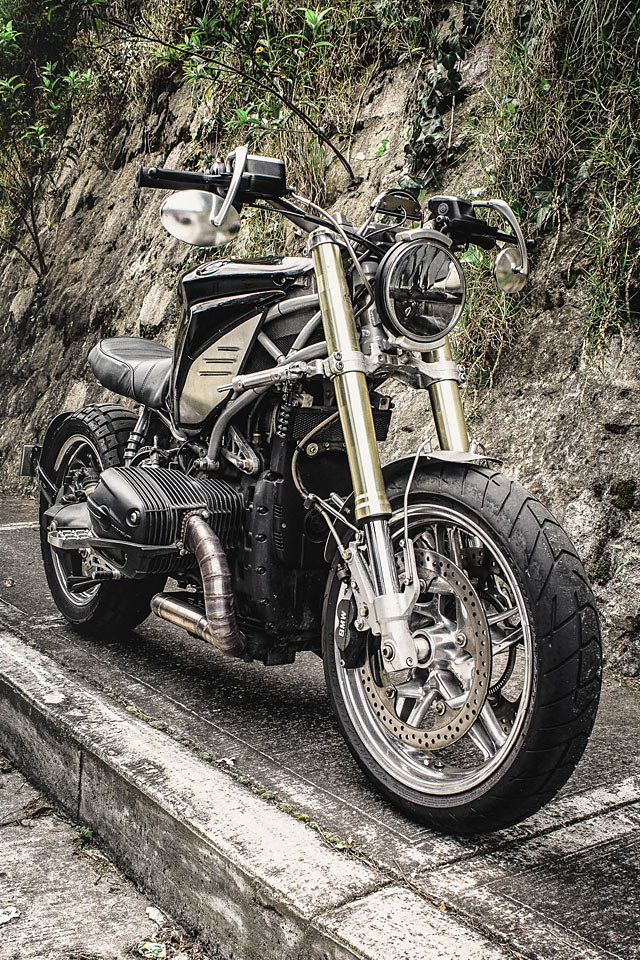 “Our starting point was to remove the Telelever and create a complete frame; we were very lucky because our father Gustavo was working with us full-time, so with his engineering knowledge we were able to design a hybrid frame that consists of a tubular steel trellis frame and two 7075 aluminum uprights. For the geometry, we worked with the trail and rake of the Monster.” With the frame finished, they threw on a Showa USD fork up front and for the rear they kept things pretty much OEM. “For the stance we wanted to maximize the characteristics of the donor bike, so we kept the boxer engine very low to gain a lower center of mass and we cut the overall weight of the bike while keeping the upright position.” 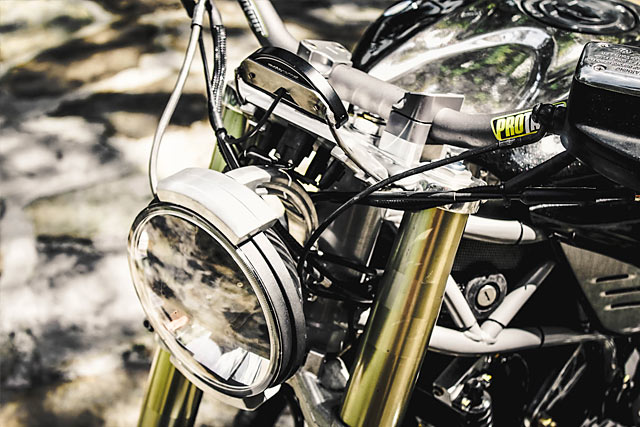 “In terms of design, we wanted the bike to stand out by keeping it simple and minimalistic with a single seat and a tank that highlighted the work on the frame. Also, some lines we chose belong to a drag bike in the sense that they allow the single-sided swing arm to look its best. For the foot pegs, we did our signature hand-milled ones out of 7075 aluminum and for the headlight we used a LED light unit and mounted it using three milled pieces of round aluminum. We wanted the design of the clamp to be clean and functional and it ended up being a C-shape that, in conjunction with a bracket welded to the frame, allows the light to tilt up and down enabling full adjustment.”

[superquote]“In terms of design, we wanted the bike to stand out by keeping it simple and minimalistic.”[/superquote]

Like most of their custom bikes, the engine was always destined to become a focal point. The tank’s form keeps the lines horizontal to the ground and they modified it by adding two elegant aluminum pieces with louvres that integrate it into the main frame. For the paint, they used ‘Spectra Chrome’ in the middle, Black Pearl on the tank and tied it all together with a powder coated frame in Nardo Grey. Next, the seat was handmade in leather and trimmed to the rear frame to achieve a ‘floating’ look. 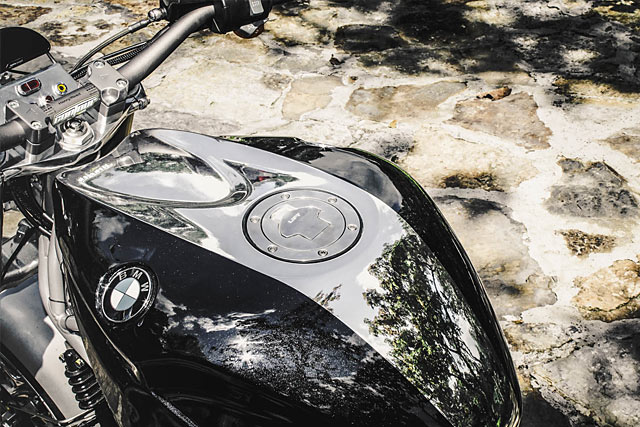 “As we wanted to accentuate the natural characteristics of the original bike, we designed and built a full exhaust system out of stainless steel using our TIG welding skills. We made an ‘X collector’ to gain more torque and for the silencer we built a slip-on out of aluminum topped off with a hand-milled cap to achieve a similar power band to that of an R NineT. The visual design of the full system gave a nice balance between the front and the rear of the bike.” One of their biggest challenges was to reduce overall weight and in the end we manage to build a bike weighing in at 202kg (445lbs) wet. Add this to a purported 96hp and 78ft-lbs of torque to the rear wheel and you have quite a spritely little custom on your hands. 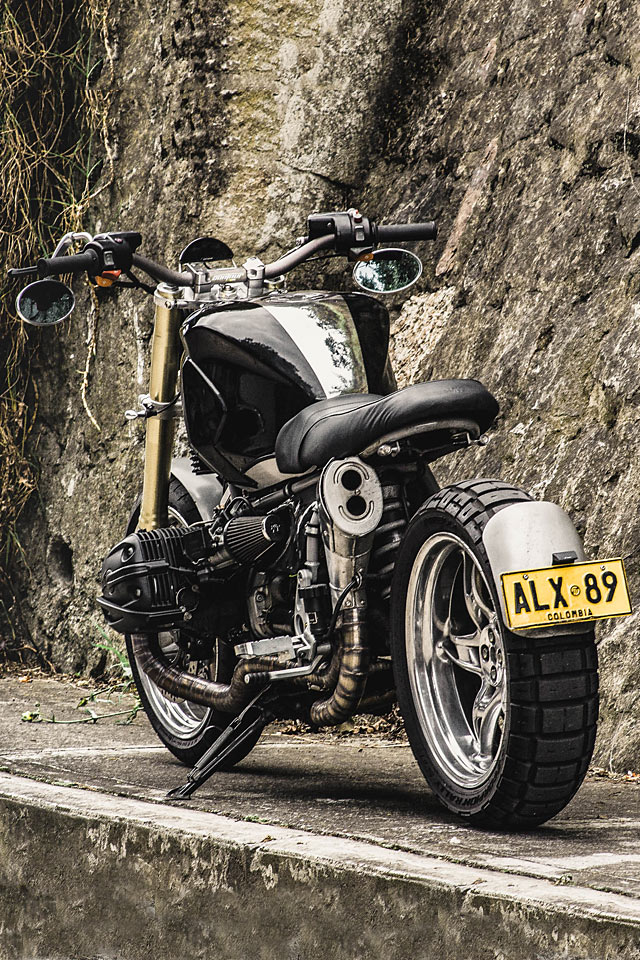 “There were two things that consumed us completely: the first one was the BMW‘s frame with the 7075 aluminium uprights and the second one was the C-clamp on the headlight, mainly because it was made in a conventional Bridgeport mill. We milled the uprights of the frame with the same pattern of the rear sets that we built for our previous gold BMW R90/6.” The guys report that the finished bike “feels beautifully analogue,” something that probably owes as much to the focus and knowledge that a tight-knit family team brings to the equation as it does to those beautiful new Showas. Sharp build, indeed. 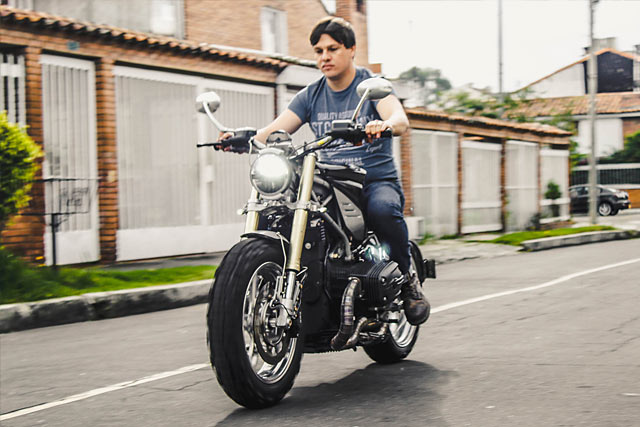