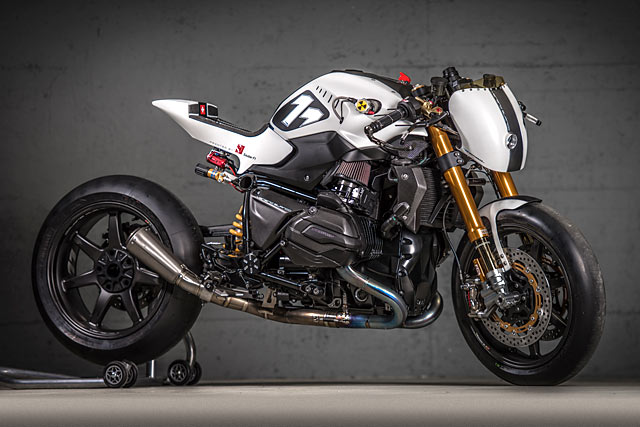 The Swiss can be a very serious bunch of people. Pragmatic, practical and sometimes a little dry, they’re often considered the chartered accounts of the Europe. But people like the mad crew at VTR Customs prove that there’s an undercurrent of beautiful craziness running through the alps. Maybe it’s in the mountain water. But the end result of this rich vein of madness are bikes like this – a NOS powered BMW R1200R racer dubbed ‘Veneno Blanco’ – Spanish for ‘White Poison’. Like many of the greatest ideas devised by mankind, the Veneno Blanco was dreamed up over a few beers. The owner of a previous VTR Custom, a R1200 dubbed ‘Goodwood’, had just run it in a 1/8th mile sprint cup. And he’d just had his ass handed to him, with the series placing no limitations on displacement, aspiration type or fuel which rendered the big BMW boxer rather uncompetitive. As a result he was knocked out fairly early on by an inline four, turbocharged Yamaha with a Stretch Armstrong swingarm. It was fun anyway, but the owner wanted to be more competitive. So the owner had an idea – what if they went all out on the next R1200 build? VTR Custom’s chief instigator, Dani Weidmann, liked the sound of it. ‘We started the outline of Veneno Blanco,’ he explains, ‘Lightweight with lots of carbon parts and with top of the line racing equipment…’ as the night dragged on the whole thing started to come together on the back of a napkin. And the client was more than receptive to Dani’s questions. ‘Street legal? Who cares! Budget? Who cares!’ he recalls.

It’s a dream brief for a bike builder. And back home when the beers had well and truly worn off the idea still seemed like a good one. So Dani begun listing the components needed to make the R1200R really snarl. With a firm idea of the direction they wanted to head in he confirmed with his client that budget really wasn’t a concern – and it wasn’t – and they were underway. And that’s how this no-expense-spared build came to fruition. It really is a Swiss-grade motorcycle. Just look at the suspension. The front forks are Öhlins mounted into a custom top triple clamp made by their friends at the nearby Suter Racing Moto2 facility. Underneath, the Veneno Blanco runs Brembo calipers and discs mounted to BST carbon wheels. Controls also include Magura HC3 Brake and Clutch pistons. All that costs more than my entire stable of motorcycles.

[superquote]“And that’s how this no-expense-spared build came to fruition. It really is a Swiss-grade motorcycle.”[/superquote] But with the Blanco racer, VTR customs quickly found themselves having to bend some of their own rules. ‘One of our promises to our clients is that we won’t copy or make replicas of our custom bikes,’ Dani says, ‘They are all unique builds and will never be seen anywhere else.’ But thankfully they softened this it a little for the client, as he already owned one their creations. So they were able to pinch a few components, the first of which is the tailpiece from the Goodwood build. But as beautiful as it was it was also handmade, bespoke and thoroughly uncrashable. So Dani and his team did took a scan of the original alloy unit and had several copies 3D printed by the Sauber F1 team, who also work nearby. How cool is that?

Then attention turned to the most important component – the engine. Now the engine work itself isn’t terribly exciting – there’s no big bore kit, forged pistons or tricky cams. It does have a set of howling open exhausts and free-flowing air filters, but that’s about it. The real work would come in the form of a nitrous oxide system. ‘The position of the NOS bottle was quite the challenge,’ Dani explains. ‘We didn’t want the bottle itself to hang out up in the air or shout ‘LOOK HERE I AM!’’, he laughs. ‘Remember that we are Swiss and we do like things quiet and discreet.’ So says the man who built a 170 horsepower R1200R. Instead Dani made use of the old airbox just underneath the fuel tank covers with the opening valve protruding right where the old BMW logo used to sit. It’s a seriously well-integrated bit of kit.

The cockpit fairing was made out of alloy and only fitted with lights a month before the bike was completed, as there was no plans to have any kind of lighting until then. The owner turned up to the workshop making enquiries about fitting some ultra-small lights to get it registered in Switzerland. ‘I told him to forget it,’ Dani says, ‘I told him he’d be going to jail after riding it a kilometer on Swiss streets! But then he said that he owned a property in Monaco and he’d be able to ride it there when the Formula 1 came to town!’ And with that some tidy lights were fitted, just as the matt white paint scheme was laid on by local genius Freuler Benken. And with that, the most insane R1200R racer in the world was complete and ready to hit the track. ‘We’re looking forward to seeing faces at the race track when we unload his bikes,’ Dani says. ‘We’ll first unload his BMW HP4 Race and then put the Veneno Blanco next to it to kick their asses.’ If this seriously worked BMW runs half as well as it looks, the next sprint series is his to lose.