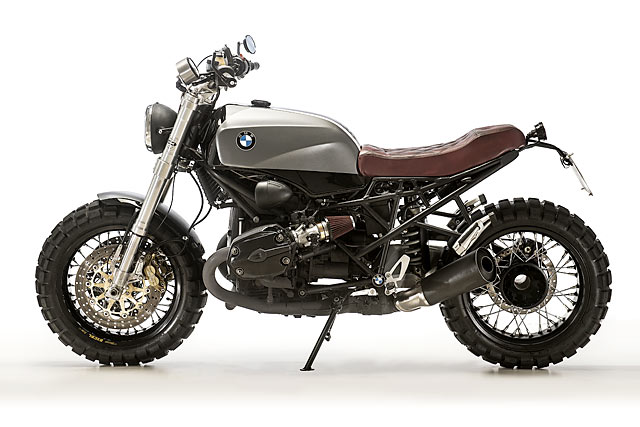 Plying your trade in a workshop that is literally a stones throw from the centre of Rome means any artist is surrounded by thousands of years of inspiration. A handy boost for those building custom bikes where the stimulus to creativity goes far beyond the mere mechanical. But sometimes all well trodden paths draw a blank and you have to first blow up the rule book before bringing everything back together. That was the philosophy Emporio Elaborazioni Meccaniche took to their latest project, they just didn’t figure there would be a literal explosion along the way. But the result was worth the burnt brows with a bratty big wheeled 2007 BMW R1200r they call Titano. Having been operating long enough now to have built a considerable portfolio, Dopz, Schizzo and the team at EEM have settled in on two distinctive styles. Either producing bikes that return classic machines to their former glory or pulling off killer customs with an unmistakable sense of Italian style. But when a customer approached them for a BMW build he had a very clear mandate, not only did the front and rear tyres have to be matching sizes, they had to be big knobbies too! He also had a bike in mind and in the BMW R1200 he’d chosen a machine that’s telelever front end would make the task that much harder.

But the big BMW is a great all-rounder, it’ll munch miles for days as the perfect touring machine and yet still have the agility to carve through traffic as a fantastic daily ride with Bavaria’s best build quality. To get the process going Dopz pulled out his art pens to draw up the design for the customers tick of approval and then it was all hands on deck! Tackling the challenge of a monster tyre’d R1200 meant not only squeezing the rubber in but also dealing with the unusual technology of the BMW’s chassis. The solution is both genius and quintessentially Italian, with the crew seeing the similarity to a Ducati design stressed member arrangement they took the logical step. The result is a frame that is Italian at the front, German at the rear and plenty of EEM know how to make it all fit together. A Ducati frame provides its conventional head stock and forward section that is adapted to bolt to the boxer engine. While fabricating this part of the chassis the boys decided to remove some rake from the design to assist with faster steering that a big tyre would otherwise inhibit. With the front end given extra bracing for strength attention could be turned rearward and Dopz decided big and beefy was the name of the game. He took the stock subframe and reinforced the entire piece with added bracing to give the now exposed unit some serious beef. The chassis could now be bolted onto the engine and the big wheeled brat was taking shape but a solution had to be found for the front suspension. With the tape measure out and wanting a front end that could handle the task a set of forks from a Ducati Multistrada were chosen. Then it was over to the in-house CNC machine to turn up a set of stunning billet triple clamps that could take the punishment and also space the wheel wide enough to accept the oversized rubber. With the right fine tuning the adjustable rear shock that controls the single sided swingarm was working perfectly with the Ducati forks. The chosen tyres are the popular Continental TKC80’s with a set of matching 180 section units front and rear giving an imposing presence. They might take on cartoon like proportions but as standard equipment on a range of BMW’s and even KTM’s power packed Adventure R they’ll still provide plenty of usability. To lighten the unsprung weight, rims front and rear come from Excel laced to the hubs with stainless steel spokes. The Multistrada front end provides its factory equipped drilled rotors and Brembo calipers while the standard BMW unit is more than capable of handling the rear. Now with one hell of a roller on their hands the EEM team wanted to give it the right look to match. In their quest for faster lines they opted for something out of the Kawasaki catalogue, “After many tries, we decided on an old GPZ tank which we modified to fit the frame, this meant an external fuel pump was required,” explains Dopz. But with the tank fitting perfectly on the BMW frame they wanted to have a second go at the fuel pump lines having already crafted a neat sight tube. This is when things got a little messy, with the tank making a perfect seal it was time to lay down the final bead…. BOOM!

[superquote]“After many tries, we decided on an old GPZ tank which we modified to fit the frame.”[/superquote] The tank literally exploded and tore itself to pieces, a quick count and thankfully everyone still had all their fingers and toes. It could have been worse, with the precautions of properly draining the tank and filling it with water, it had at least saved everyone from serious harm. But even a vapour explosion will destroy solid metal and a new GPZ tank had to be found and the process of fabricating the fuel lines, pump mount and sight tube done all over again. Then it was over to the EEM paint booth for the Titano grey, meaning big and strong in Italian, and black paint combination laid down by E!Design.

The hand formed front mudguard gets the same gloss black paint with the EEM logo beautifully laid down in gold. To accentuate the paint the seat colour is a classic dark brown leather, designed for comfortable two up riding with plenty of padding in all the right places. The BMW switch gear was moved across to the new bars with all the instrumentation swapped out for a single speedo. The single round headlight helps complement the classic aspects of the bike, but a set of twin projector lights leaves you in no doubt of this urban assault vehicle’s full capabilities. To extract some extra bark from the Scrambler’s silky smooth 4 valve boxer twin, a new set of headers was fabbed up and ceramic coated that now vent out of a more rorty rear can. The engine too takes on a more aggressive sound with the large airbox ditched for a pair of pod filters mated up to the factory intakes. The shaft drive, almost unbreakable engine and famed BMW reliability mean the city streets or the Italian countryside are accessible at anytime. But should things turn post-apocalyptic, Emporio Elaborazioni Meccaniche have ensured Titano is battle ready to take their fellow Roman into battle on the ultimate war-horse in times of destruction.