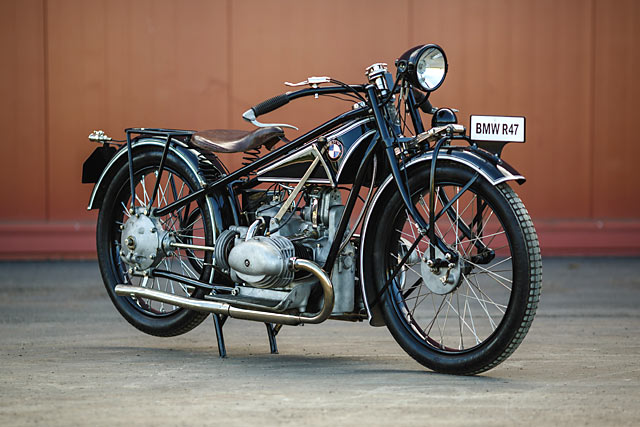 Ever noticed how the impossible seems simple once you’ve already done it? BMW’s creation of their very first branded bike, the R32, seems like a ludicrous feat even 100-odd years later. Hell, they are still using the same basic layout today. But for designer Max Friz and the rest of the company’s engineers, their next job was to go one better. For as great as they were, the R32 and its R37 racing cousin were complex and expensive old beasts. Their brief for the R42 and R47 was nigh-on impossible – do more with less. They had to be faster, lighter and cheaper. But hey, they’d done it once before, right? With no major wars to fight, the main task for Germany’s BMW in the 1920s was that of creating a successful motorcycle for mass production. After a thoroughly German analysis of the R37 model, which was a fiddly and costly bike to make, the German engineers arrived at a great solution. The key to success of the newly named ‘R47’ motorcycle was the reduction of manufacturing costs while also improving the new bike’s performance. You can almost see them now, all standing around and sternly nodding to each other while secretly scheißen in their hosen. Luckily, they weren’t throwing out any babies with any bathwaters. There were some decent engine improvements flagged for the R47, but the rest of the classic bike wasn’t going to be changed all that much. So having procured a spare 500cc engine from an R37 as a starting point, the BMW engineers got to work by deleting pretty much anything that wasn’t bolted down – and some things that were, too. Along with a simplified frame and suspension, hindsight allowed them to remove large chunks of the R37s electricals that were not needed. As a result, they were able to lower the bike’s cost by 36% while keeping all of its racing ambitions alive, mostly thanks to that beautiful motor.

Disposing of the side-valves found in the R42, the horizontally opposed OHV engine of the R47 was otherwise fairly similar, except that its power was increased to 18hp and therefore its maximum speed to around 110 km/h. Clearly it appealed to their customer base; BMW sold around 1720 R47s which was a full ten times more than the R37, with many of these going to German racing clubs.

[superquote]“Clearly it appealed to their customer base; BMW sold around 1720 R47s which was a full ten times more than the R37.”[/superquote] Another reason for the runaway success of the R47 was that BMW did not present it as a track-only bike. Instead, it was offered in a ‘basic’ configuration that the customer could add to from a list of many optional extras, including a generator, horn and headlight. A larger capacity fuel tank was also offered, something clearly designed to appeal to those planning on travelling faster of further than Joe (or Johannes) Average.

Other firsts for the bike included a rudimentary silencer and a Cardan (or shaft) drive brake. Look closely and you’ll see the brake pedal near where the shaft exits the rear of the engine. And then there’s the fact that roller bearings were used in it for the first time ever as part of the OHV design, and that it was also one of the first bikes to use replaceable bushings. What a classic tour de force.

Along with those breakthroughs, you’ve also got a 6 volt Bosch magneto, 14 litre tank, 3 speed ‘box and a single plate dry clutch, all wrapped up in a 130 kg package, stamped ‘special delivery’ from sunny Bavaria. The model R47 occupies the toppest of top shelves among BMW’s classic motorcycles because it was a truly amazing bike for its time. And as you’d expect, this is reflected in its current market value, which is amongst the highest of all the old Beemers. Motorworld’s experts also note that some scammers will try to pass off reworked R42s as R47s. Many of these fakes are virtually indistinguishable from the real thing, so if you are ready to drop a cool $70,000 on a pristine model like this, be good and sure you’re getting your money’s worth.