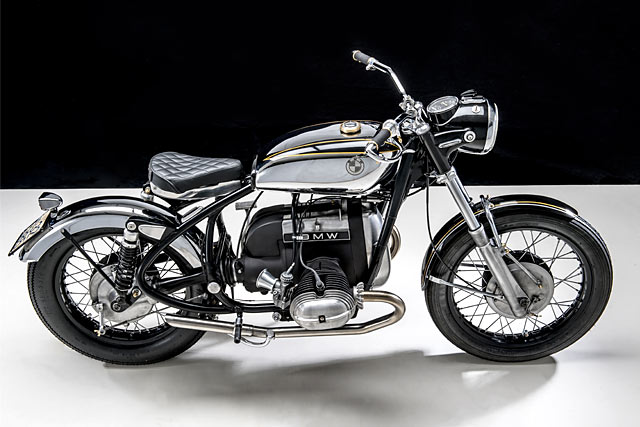 Over recent years we’ve featured countless BMW builds, crafted from models from the ’70s right through to the modern era. But there was a time in the German company’s history when there was every chance that not a single one of those machines would ever have seen the light of day. The big Bavarian nearly gave up on two wheels until they managed to lure engineer Hans-Günther von der Marwitz away from Porsche and dedicate a new factory in Berlin to Motorcycles. From near death, BMW bikes were back in business and the “Slash 5” series would be their saviour. So tasked with hand crafting a classic tribute to Bayerische Motoren Werke’s machines of old, Rome’s Emporio Elaborazioni took the little brother BMW R50/5 and created a vintage masterpiece known simply as ‘Solo’. When it came to the donor bike for such a build, the little 50 made a lot more sense than its more popular bigger siblings the R60 and R75. Dopz and the Elaborazioni crew was taking much of their inspiration from the beautiful R23 and R32, and a motorcycle of more diminutive proportions was a better match. While the R50 is also a rarer commodity, with only a quarter as many made as the other Slash 5s while still being from that crucial era when BMW came booming back in Berlin. For the team it was also a chance to shift gears in another way as Dopz explains, “After finishing new concepts like Cobra or Titano I had the chance to go back to bike roots because the customer from Sicily asked me for something purely elegant.” The client is also a trusting man, despite Dopz drawing him a number of sketches the word came back to just let the imagination run wild. The request was simply to start with a piece of “white paper” and from there the client would wait to see the end result. With a smile on his face, getting full creative freedom, Dopz laid out a simple battle plan, “I started from the word ‘Classic‘, I had an idea of it and I translated and re-interpreted it on this bike.” To get their hands dirty the Rome based shop started by removing the original parts they wished to keep and restoring them back to their brilliant best. From the front the forks and that exquisite vintage styled headlight were the first off the frame and up on the bench were rebuilt to factory specs. The lower legs were returned to a raw finish and this prompted the decision to create flowing contrast between black and metal throughout. The original hub operates like the day it left the factory, no easy task with lower production numbers meaning fewer parts. A new set of gloss black rims were laced up to the hub with Avon Speedmaster rubber leaving no doubt as to the classic styling they were aiming for. But at the rear Dopz had other things in mind, “I like to mix past and future.” To achieve this the now empty frame had its entire back end cut off and all new pipework bent and shaped before being welded on to the powder coated chassis. Dressed up with some polished plate the new top shock supports swing a set of modern YSS shocks for drastically improved performance and an almost ‘Plunger’ like look. Just like the opposite end a new black rim wears vintage rubber, this a T/T Classic but again there is another trick for the hub. To maintain the contrast both hubs are painted black on one side, with the plate and mechanical linkages on the other side left in raw metal. Now he had a roller that had the look he was after it was time for Dopz and the gang to make the visuals shine like no other. The new tank is impossible to miss and not just because of its mirror like finish. The shape hearkens back to the smooth lines of the Pre-war era and the black with gold pinstriping gives it a million dollar finish. But it’s the little details the crew are most proud of, the handmade brass and alloy cap that took many sleepless nights and the all metal badges that adorn the sides.

[superquote]“Now he had the look he was after, it was time for Dopz to make the visuals shine like no other.”[/superquote]

Just like the bikes that had inspired the initial design, it was decided a solo seat was the way to go. Having previously cut off the subframe the stunning classic black leather saddle now appears to float on the twin supports that attach to the main hoop. But that wasn’t the last of the inspiration taken from the early R models; both front and rear feature tyre hugging fenders, the mirror finish applied to the rear and the black with gold striping on the front. All of the mounts were made in-house and an array of brass fittings compliment the other accents used throughout.

Powering ‘Solo’ down the ancient Roman roads that span the Eastern coastline of the beautiful Mediterranean island, remains the ultra reliable BMW 498cc, air-cooled, flat twin that would disappear from the new Slash 6 line-up that followed. But in the little engine Dopz saw a possibility, “The valves covers are designed from the original ones, TIG welded and machined to have that retro but innovative look.” So pleased with the result he’s selling copies and the rest of the engine doesn’t disappoint. Machined velocity stacks, refurbished bolt-ons, stunning matte and metal finish, it’s all ready to do another million miles. Each one of which will be heard roaring from the stainless steel header pipes and very minimal muffling. The wide, raised polished bars make steering the Beemer a breeze and the inverted levers with brass accents and wrapped grips add extra style points. The big headlight remains, the built-in instruments and switches might be a nightmare to wire into the space but provide a simple nostalgic engagement missing from modern TFT dashes. But to keep the Polizia from getting bent out of shape, a 21st century solution was created in four custom-built LED indicators that do nothing to spoil the classic lines. There is something incredibly emotive about a truly timeless motorcycle, this one now a uniquely Italian Emporio Elaborazioni creation whose beauty will live on forever. Or as Dopz sees his artwork “for me it’s a timeless bike, I hope when I see these pictures in 20 years, I’ll love the bike as I do today, elegant like an actor or actress from the 40’s in a classic black and white movie.”