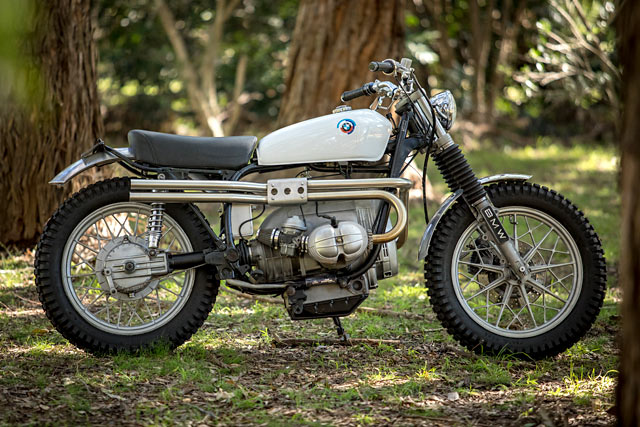 Matt Hart’s a photographer – and a damn good one at that. Trawling through his drool-worthy Instagram shows his passion for racing old Porsches and other, lesser marques. But when he was young he lived and breathed bikes, belting around on a little 80cc Yamaha. And lately the moto bug has bitten again. So much so he went out and built this, a gorgeous 1984 BMW R65 scrambler. 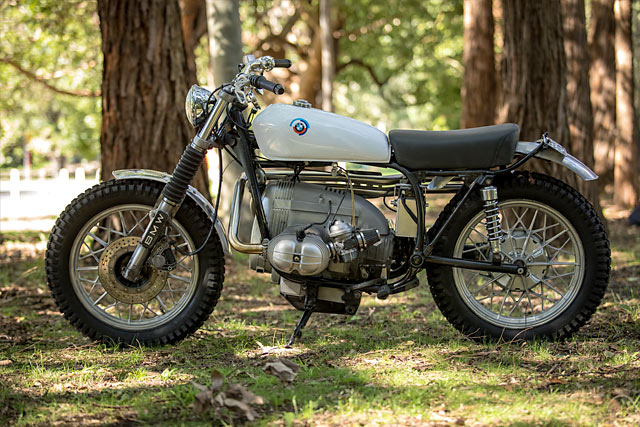 “I’m always looking at classifieds for old cars and bikes just for curiosity,” Matt says. “I found this for a good price not far from where I live.” He saddled up and headed out to take a look at the R65 Beemer. “When I arrived I already knew the owner, which was a bit of a coincidence,” Matt recalls. The old boxer itself had been sitting baking in the sun for a while but was otherwise mechanically sound. He wasted no time in getting it back to his garage. 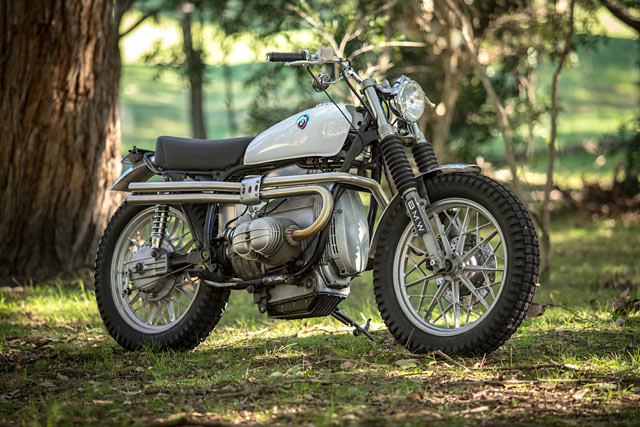 “That same afternoon I was stripping it down to a rolling frame and I went about creating a plan,” he says. Which is seemingly easy, given the gamut of custom BMW airheads out there. But there’s a flip side to tackling such a common base for a custom build. “Black wheels, cut rear subframes, monoshock conversions… they all looked the same to me,” he says. 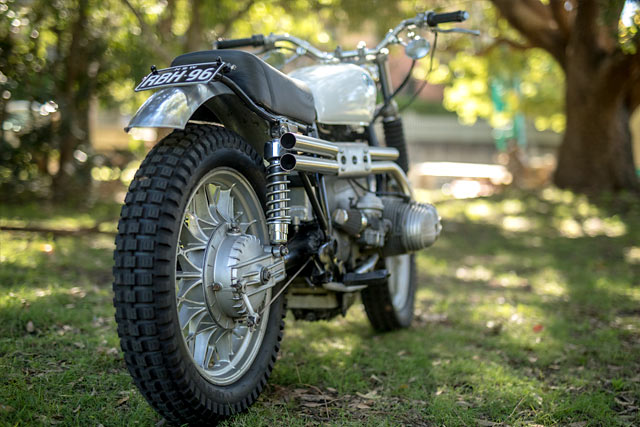 So Instead, Matt went back to the bike he had when he was a kid – the old Yamaha MX80. “As a seven-year-old I loved that thing, jumping it and getting it sideways. I was hooked.” So Matt drew on a collection of hundreds of pictures of old scramblers, desert sleds and 6 day trials bikes to help with inspiration to find out exactly what he wanted. But there was a bit of a caveat with the build. 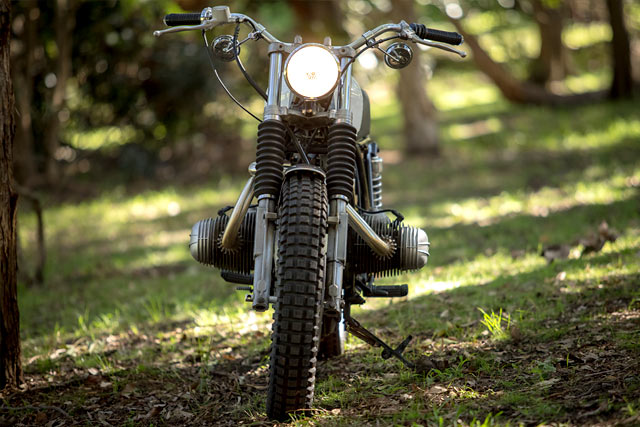 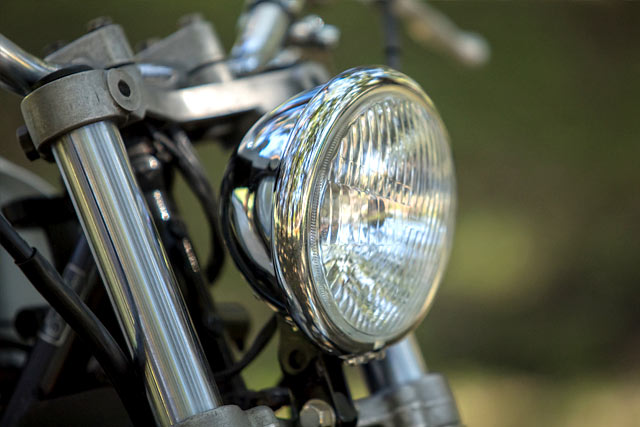 The subframe was cut and modified with superfluous tabs and footpegs removed. The wiring, which is still a bit of a work in progress, now now all runs through a Motogadget M-unit box with mini switches, mini speedo and M-lock while the controls are a gorgeous pair by Kustomtech in Italy. In terms of bolt-ons the R65 also sports Ventura bars and Domino throttle and grips. It’s got a one-off seat and the rear was lowered by 2” after mounting some Harley shock absorbers. 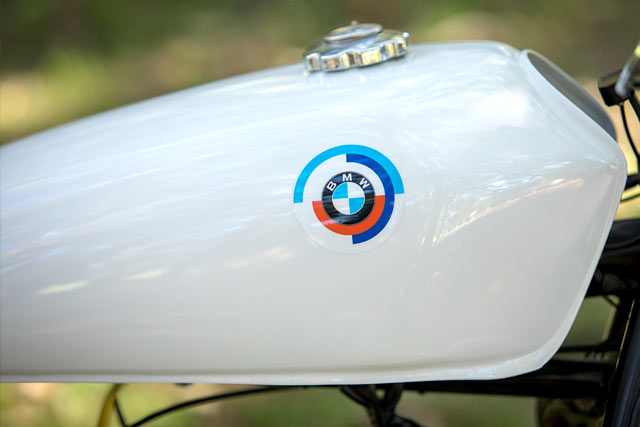 There’s also some killer little parts that went a long way to pushing the mid 80’s BMW into the realm of something a little older. There’s an alloy fastback engine cover from Better Boxer in New Zealand and backdated rocker covers, choke pulls, and engine air breather kit from staples of the BMW scene, Boxer metal.

[superquote]“There’s also some killer little parts that went a long way to pushing the mid 80’s BMW into the realm of something a little older.”[/superquote] 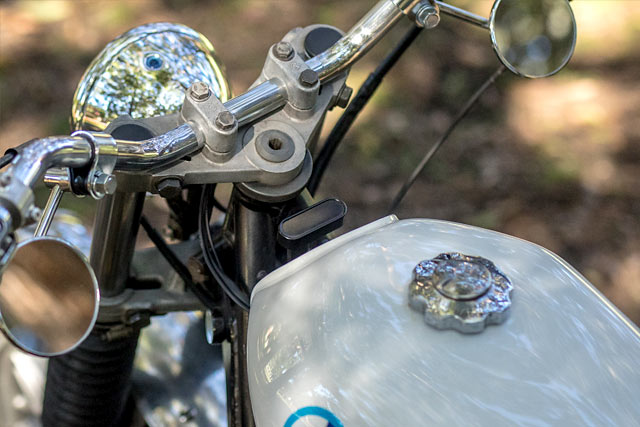 Mechanically the Beemer was in stellar condition and all it needed was the usual touch-up for a bike that’s been sitting idle for a while. That’s fork seals, oil, some new springs and also a rejet for the new exhaust, which was made by Tinworks Inc in Sydney – one of people Matt engaged with who definitely did know what they were doing. 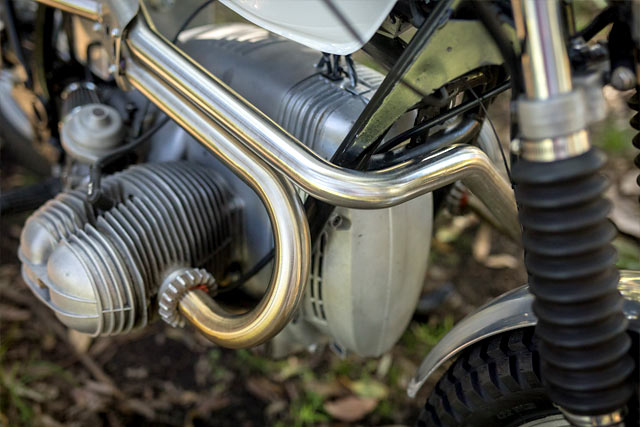 The highlight of the bike is the old slimline Honda CG125 gas tank that really helps lighten up the lines and push it further away from the look of many other airhead customs we’ve seen. A lick of paint was provided by Sydney’s Colourfuel. It caps off an excellent twist on the usual boxer customs we feature. “The modern bits are a bit trick on an old bike like this,” Matt says, “I’ve purposefully kept some patina and tried to tie in the new parts with the old. I’m not a bike builder as such and I didn’t build it to enter shows, I just want to ride it.” 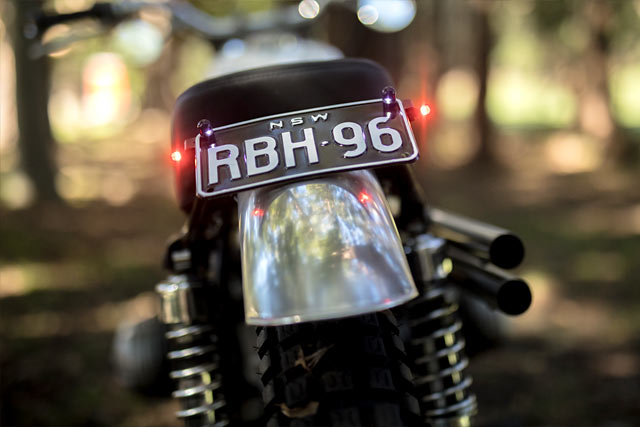