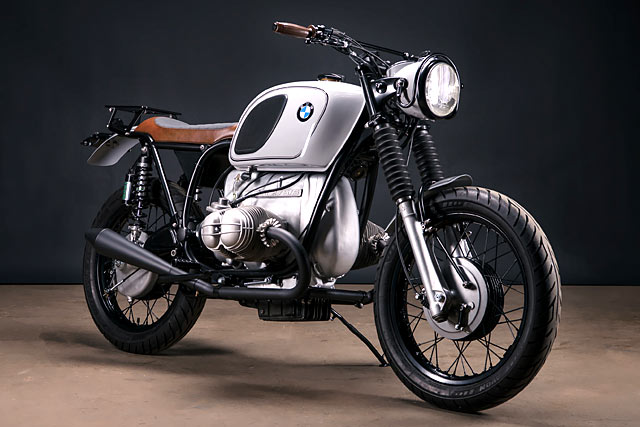 Twenty-twenty hindsight is a truly wonderful thing. It turns drunkards into teetotallers, sleaze bags into prudes and fools into geniuses. But for those of us of a more creative bent, revisiting a previous piece of work without the deadlines and lack of sleep can be a godsend. This second bite of the cherry is rare; a third is almost mythical. But that’s exactly what happened for Illinois’s Analog Motorcycles on this, their ‘Dritte’ BMW R75/5 Restomod. “Dritte is German for Third,” says Analog’s Tony Prust, kicking our chat off. “As this is a ‘third times a charm’ build. We built the first version of this bike for a friend about 5 years ago. It’s a ’72 R75/5 and was the very first BMW we’d built. I actually found it for him at a swap meet in Wisconsin. It already had some custom work done to it, but it wasn’t really up to scratch. He wanted it painted, tailored a little, and fine-tuned once he got it. It was a very mild build back then, and nowhere near where we take old airheads these days.”

After receiving the bike from Analog in its second incarnation, the customer had kept up with the shop’s subsequent Beemer builds and quickly recognised that the team was taking them up a notch or two each time. “We have also started to develop a decent amount of airhead-specific parts along the way, which caught his eye. He loved his R75 but wanted to push things a little further while also transforming it from a two-up ride to single-seater.” “We started by adding our bolt-on subframe to the bike. From there we made a rear fender and then decided to redo the front to match. Switching from the big gel battery to a small Earth X lithium unit allowed us to make a sleek little battery tray under the seat, which also acts as an inner fender.” After the rear structure was dialed in, Tony began fabricating a seat pan. Being sticklers for fit and finish, time was taken to ensure that the pan was bent up just right before it was upholstered in a slick brown leather and gripper combo. “The customer likes to ride the BMW over long distances, so he requested a luggage rack be added. We make a universal rack that we sell on our site and decided to debut a mini version on this build to see how it would look.” No prizes for guessing how that turned out, then.

“From there we added our peg mounts, pegs and top triple with bar clamps. We picked up some fresh headers and used our slip-on muffler kit to handle the exhaust side. The rear fender is sporting our Retro Lighting kit and some matching Motogadget mblaze pin signals up front. Some Moose aluminum handlebars and brown grips finished things off.” And while the frame was out getting powder coated, Tony and the team tuned the engine, cleaned it up and swapped a few leaky seals and gaskets. “The hardest part was not going all in,” says Tony. “When we get into these old BMW airheads we like to fully rewire them, change up the instrumentation, add electronic ignition and much more. But the customer just wanted to go up a single notch, not all the notches,” laughs Tony. “He liked the classic controls and speedo/tach set up, so showing restraint was not easy.”

[superquote]“The hardest part was not going all in. The customer just wanted to go up a single notch, not all the notches.”[/superquote] “With my latest dose of hindsight, I like how our subframe looks with a slimmed down, mono set up,” concludes Tony. “The luggage rack is easily removable, and the bike looks great with or without it. I also really like the classic feel of this machine. We tend to make them fully modern these days as do many other builders, but this one just oozes that classic BMW airhead vibe.”