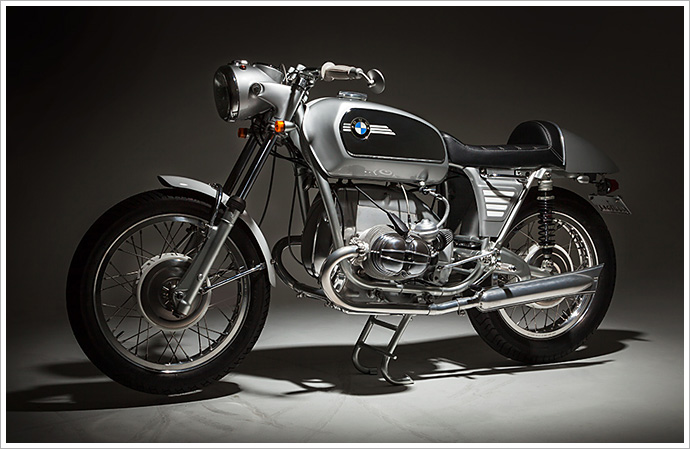 If you’re like me, and many other custom bike riders out there, you’ve had to face the rather daunting task of getting that dream bike out of your head and into the skillful hands of your chosen builder. There’s probably as many ways to do this as there are custom bikes on the road. Photoshop, sketches, emails – why, I bet there’s a guy somewhere who’s described his ideal two-wheeled vision using his deft mime skills. But if you’re taking sheer cool efficiency as a means of judging the best brief, then Shane Balkowitsch’s ‘make it match my ’65 Porsche’ really takes the cake. And that’s just the brief that Sothern Californian Josh Withers received when he decided to take on the classic BMW build of a lifetime. Here’s Josh. “I was just coming off the high of my second ‘frame off, down to the crank’ airhead restoration when I got a random call from a guy in North Dakota. We got to chatting, and he quickly revealed his interest in having me do a custom motorcycle for him just like my latest build. Due to the internet and a few magazine articles, my bright blue 1973 R60/5 toaster cafe conversion was attracting attention from all over the world, and now from this guy ‘Shane’. In this first conversation with Shane, I prefaced that I was not a professional mechanic and I work out of the garage of my humble Southern California home. He was understanding of that, put his faith in me, and thus our project and friendship began.” “Within a month of starting, we found a carcass of a 1972 R75/5 for $600. It was in really bad shape. Broken rod, wiring was a mess with extra lights and switches drilled in the headlight and many other parts were missing, broken or downright bastardized. As I met the seller in the California desert, took the bike out of his pickup truck, began to take it apart to load it into my station wagon, a stranger walked up and asked if I would be interested in another R75. Considering I already had one halfway into my car, I laughed him off at first, but then we got to talking. I soon learned that he lived nearby and had a warehouse full of motorcycles. His R75/5 was a complete bike but hadn’t run in twenty years, had no title, yet he was asking $400. I had to check it out and before I knew it, I had not one but two 1972 R75/5 motorcycles in my garage.” “Shane’s one request was that the bike matched his recently restored silver 1965 Porsche. Given that this bike was for somebody else, I couldn’t cut the same corners I did for my own personal restoration. This means completely rebuilding the engine, rebuilding and upgrading to a 5 speed transmission, new U joints, rebuilt final drive, wheel bearings, front forks, steering bearings, speedometer… I think you get the idea.” “We found a good selection of bodywork in the past few years since my last restoration and settled with Cafeboxer who even made a custom ridgeless front fender for us. After hearing good reviews from the Siebenrock piston and cylinder upgrade kit, we decided to buy a set instead of spending extra money on a BMW set of R75 pistons. The Siebenrock kit bolts onto the same rods and uses the same heads as the stock R75. Supposedly it offers a 20% upgrade in power. A lightened flywheel was a must. Electronic ignition from Dyna was added. Rear shocks from YSS. And what would be a classy café bike without some wide shoulder Akront rims laced on powder coated white hubs. Lets hope they stay clean!” “A battery has been tucked under the seat. The tail light came from an old British 6V turn signal. I found drag bars that matched my clubman handle bars on my blue café. Of course, I had to get some custom gray and silver throttle, brake and clutch cables made. I also had custom swing-arm caps made to match his Porsche, and the stripes on the toaster panels were painted white to match our sidecovers.” “To customize the bike even further, we found a reproduction set of exhausts from a 1937 R12 BMW. I had to customize them to fit the header pipes and then sent everything off to Jet Hot to get coated so the pipes would forever stay silver. They sound beefy too.” “Two years and four months after that first phone call, I was happy to let Shane know that his bike was complete. I’ve enjoyed every minute of the zen time in my garage designing another custom BMW. I had a lot of help along the way and continue to learn the nuances of these old bikes. Above all, through this process, Shane and I have shared countless phone calls, emails and text messages.” “We have became good friends and have shared the joys and sorrows of two separate lives from completely different parts of the country. Shane and I will meet face to face for the first time in a few weeks. It will be a bittersweet encounter for it also means that I will have to say goodbye to my two year labor of love and send it to North Dakota. In order to heal that anticipated wound, I’ve already started planning out my next build.” For those keen to get into the nitty gritty details of the build, head on over to Shane’s build page or maybe even check out Josh’s blog to get the lowdown on just how you’d go about replacing the cork seal on a R75’s gas cap. Just in case you were wondering.

Update: If you want to see what the Porsche looks like, here it is…