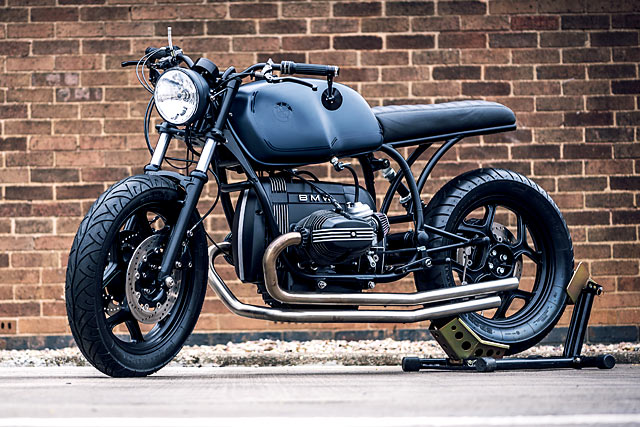 The Sinroja brother’s Leicester workshop has become somewhat of a Pipeburn haunt of late. Rahul and Birju are always happy to have us over to their Humberstone Lane lodgings, let us drink their beers and shoot the poop on life, internal combustion and everything. Of course, this means we’re also privy to all their upcoming builds. No points then for guessing the one that’s really caught our eye, then. Here’s their BMW R80 two-up brat they call the ‘R7’. “This BMW was a really fun project to work on,” beams Rahul. “The client is very creative and it was great fun sharing ideas and collaborating on the build. We wanted a practical bike for him that was comfortable, rideable and reliable. Something that performs as good as it looks whilst getting him around the streets of London.” The boys met the customer at the Bikeshed Show last year. He absolutely loved their R100 show bike, however he really wanted a comfortable two-seater brat over a cafe style bike, which meant upright bars and a more relaxed riding position. So, as always, they found a suitable donor and got cracking. “With all our builds, we completely strip the bike including the engine and start a ground-up rebuild. No time or expense spared. No matter what people say, a engine rebuild on these old BMW airheads makes a huge difference to the performance and reliability for our customers.” So the two completely stripped the brat’s engine and rebuild it with new bearings, gaskets, rings and tubes. The carbs were completely re-jetted and the gearbox was fully refurbished, meaning that all the bike’s mechanicals now perform as good as if not better than factory. “We can feel the difference now when we ride the bike and listen to that exhaust roar,” says Rahul.

“For the frame we chose the same lines as our BMW R3, as the customer seemed really taken with this look. When we redesigned the back end, we added the curved braces you see; they not only support the seat but they match the lines of the rear tyre. We also changed the original levers with Brembo high performance items and foot controls with some neat rearsets; they cleaned up the brat nicely.” They wanted the Beemer to be very simple and clean, which meant picking the simplest, cleanest electronics available – Motogadget. “We cleaned up the handlebars with indicators, mirrors, switches, and a Domino throttle. The top yoke from BMW isn’t exactly our favourite, so we called up some friends over at Fastec Engineering who CNC’d a bespoke top yoke out of billet aluminium that holds the Motogadget dial.” [superquote]“The seat follows the lines of the frame and is covered in leather from the exquisite Bentley Mulsane.”[/superquote]

“We don’t like the standard BMW headlight brackets, so we made some clean simple mounts that hold the classic 7″ Reno headlight with a halo ring that looks just like the modern BMW cars’ angel eyes. The seat follows the lines of the frame and is covered in leather from the exquisite Bentley Mulsane.” The boy’s upholster works with some fairly high-end cars and when they wanted a special matt finish black leather with a hint of grey, he revealed this. It worked perfectly.

The rear end was cleaned up superbly with more Motogadget pin indicators inside the tube. Matched with four LED daytime running light and brake lights set inside beautifully machined cases, the overall effect is quite a sight. “The tank is painted in a beautiful Storm Grey with a hint of blue nano flakes, which shine beautifully under the street lights. In the dark it’s black, but it’s a blue storm grey in the daylight.” As always with Sinroja builds, all the original electronics were chucked and friend ‘Towza Tronics’ was brought in to design and build a bespoke wiring loom for the brat. “Next, we redesigned the rear end to accommodate a fatter 140 rear tyre. We also changed the rear wheel to 17″ from a BMW K series which was machined to fit the customised bevel. It all came together nicely, and to top it all off we managed to do a disc brake conversion. It gives the bike some seriously good stopping power and lets be honest, it looks way better than the original BMW-built hub.”