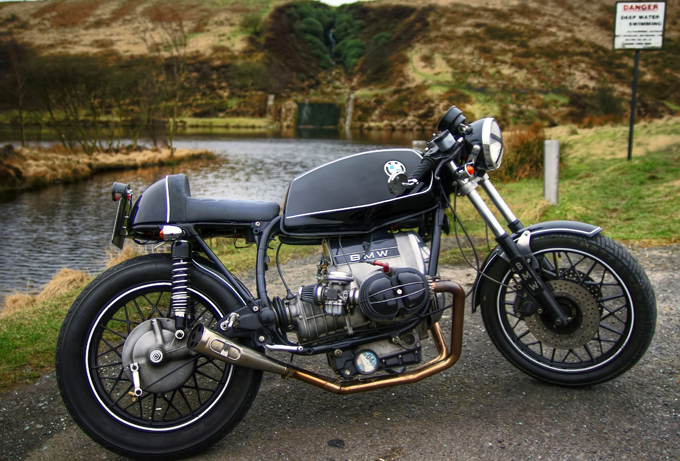 After two blown engines Englishman Chris Simpson decided to try and squeeze a R80 RT engine into his 1979 BMW R45 frame. “The powers that be said the engine wouldn’t fit, as you can see it obviously does” Chris explains. “The only engine mods were a lightweight flywheel and the air box was removed and replaced with a Bellmouths. It has custom stainless 2-1 exhausts with a stainless megaphone, fully custom sub frame with hidden battery under the seat pod, a large EARLS oil cooler from a Ford Cosworth. The controls are from a Aprilia RS 50 and an Aprilia RSVR. It has had a full race wiring loom fitted and all lights ignition removed and now starts with a master arm, start button and no key”. Chris custom made the fairing and brackets from a Classic Yamaha race fairing, it has a Manx Norton front mudguard, hugger made from the R80 front mudguard, twin disk conversion, rear sets from a Kawasaki and a upside down gear box. This beautiful Beemer is just one of the projects Chris has on the go, he’s also building a Mike Hailwood Honda Replica which we look forward to featuring when completed. You can view the ‘before’ shot of this BMW on our Flickr page.