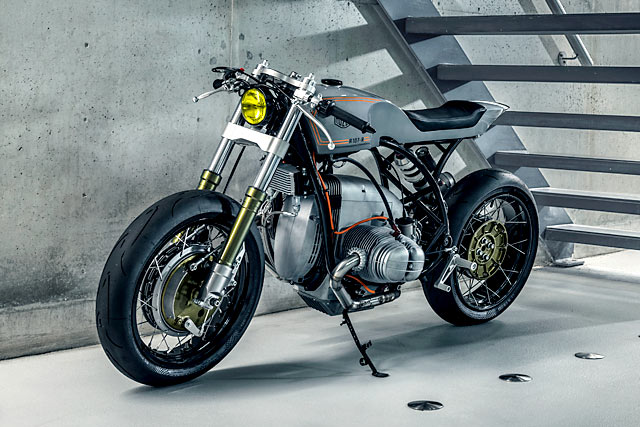 If the original design team at BMW knew that their sandals-with-socks tourers would get turned into bikes like this they would haves choked on their strudel. Despite their uninspiring origins, over the last ten years we’ve seen old Boxers shift to the forefront of the custom scene. And just when you think you’ve seen it all, the Netherland’s Nozem Amsterdam come out with this 1984 BMW R80 boxer that punches well above its weight. Nozem’s bike builds are fantastic – heavy on fabrication work, incredible attention to detail and with some of the best colour palette selection we’ve seen. But over the last few months they’ve been quiet. The sad reason for this is Nozem’s co-founder Lorenzo’s father passed away at the tail end of 2017. As a result the BMW R107R is the first foray back into bike building and the mercurial world of social media for Lorenzo. But the open-ended brief must have been a inviting return. ‘The customer wanted a monocoque bike,’ Lorenzo says, ‘and gave us plenty of freedom to do what we wanted, within the budget’ so the team went out hunting for a donor bike. A brief search had them finding this 1984 R80 at a local BMW specialist, and the customer supplied an already hopped up Siebenrock 1070cc big bore engine. Work for Lorenzo and build partner Daniël started at the front, with a pair of Honda CBR900RR forks fitted to a custom top triple clamp, recessed for a Motogadget Pro unit. Curiously, those high-performance forks were mated to a front drum. It’s strange seeing a drum on a bike like this – but it ain’t no mortal bit of braking hardware. It’s an original Ceriani 4LS 230mm model that the team tracked down in Belgium.

[superquote]“It’s strange seeing a drum on a bike like this – but it ain’t no mortal bit of braking hardware.”[/superquote]

Like all their builds, the BMW’s frame was extensively modified, cut, shut and then painted by Lifecreations 187. The exhaust system was also made by the team, and runs a scratch built 2-1 system that ends in a Laser GP-style exhaust. All typically clinical work by Nozem – but one part of the process had them tearing their hair out. ‘The hardest part of the build was the swingarm,’ Lorenzo says. ‘It’s all because of the space required to fit the new rear wheel. We had to cut part of the swingarm out and fit a new drive shaft to clear the rim. To reinforce it properly and get everything lined up was quite a hassle’. Oddly, the highlight of the bike, the unibody design of the tank and seat, wasn’t too difficult for the guys. Also made in house by the team at Nozem, every inch of the thing is perfect – the cut outs for the frame, the scallops for the legs and the way it seems to blend the best parts of a traditional cafe racer with something out of a hard-angled KTM superbike catalogue. The BMW R107R is an exceptional way for the Netherland’s Nozem to announce their return to the market, and the better times that this year will bring. ‘I’m looking forward to 2018,’ Lorenzo says, ‘I’ve got a few new projects, a new workshop coming and a few other things to look forward to’ Well, if Nozem keep building bikes like this we’re looking forward to 2018 as well.