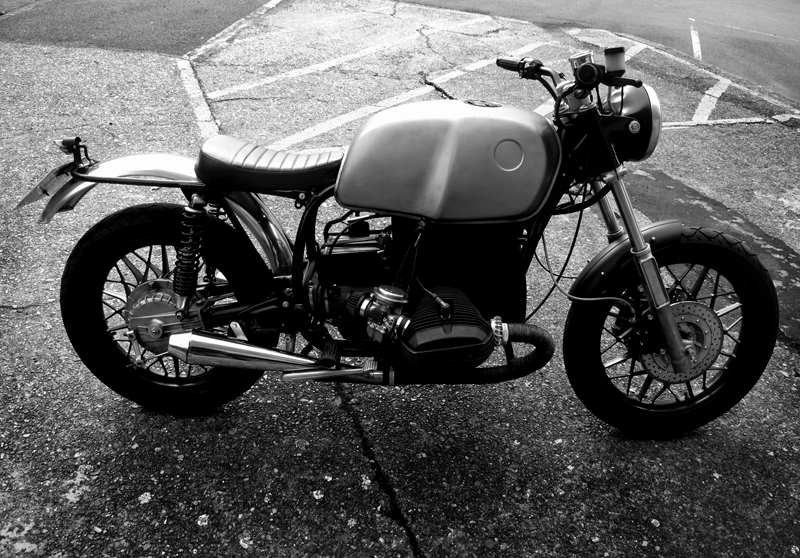 Adam Kay from the U.K. was looking for a donor bike that he could customize and ride everyday – he calls it his ‘midlife crisis’ project. After a little bit of research he came across Victory Motorcycles in Camden London. Rex the owner specializes in BMWs and classic British iron. “Rex had a R80/7 for sale so that’s what I got” said Adam. “The style of my custom came from looking at a racing Guzzi I saw on Bike EXIF. I did all the work myself under the guidance of Rex and as I only had two days a week that I could dedicate to the job, it took me 8 months to customize the R80/7″. Here’s how Adam describes his ‘midlife crisis project’:

“I wanted a single seat, a long rear mudguard and a short chopped front mudguard like a bobber. I choose not to paint the tank after I had spent ages stripping off the old paint and filler after all that effort I didn’t want to cover it up again with paint! I also wanted it to have no decals, because to me a boxer is clearly a BMW, so it doesn’t need any info on the tank.

“I began with a total strip down to the frame. The frame had all parts that were not needed cut off. Battery box, plastic covers hooks, seat hinges and a few more bits. The frame, subframe, swinging arm, side stand, top yoke and wheels were powder coated in satin black. Most nuts, bolts and other chromed parts were re-plated in a dull chrome or were replaced with stainless steel parts. The brake system was replaced from an under the tank unit to a handlebar mounted reservoir system. A second brembo was added. 2 new stainless discs replaced the single steel disc and steel braided hoses are used. The engine and gearbox was painted with black heat resistant paint. New shorter and loud exhausts are used. Graphite impregnated exhaust wrap for the header pipes to give the bike a meaner look. New alloy rear mudguard cut to fit – original front mudguard cut to new size and shape painted matt black. Replaced the touring seat with a customized single scrambler seat. The tank was then stripped to the steel and hand sanded, then a clear coat of lacquer was used to seal it.

“I changed the R80/7 from what I thought could be seen as a rather dull machine to a thing of old school rebellion. I wanted a machine that could be ridden every day and one that looks as cool as any custom. I think this BMW does just that. I also wanted to challenge myself as I have never done anything like this before so this could be my “midlife crisis” project. I think I have done a great job on this motorcycle and have a commission to customize a R80/7 to look like mine. I’m also working on a new luxurious R80 custom which should be ready next year.”

Adam is now working on his next project, a ‘lux’ R80 custom which we look forward to sharing with you when finished. You can see more build pics and info on his site Untitled Motorcycles.