The French make it easy to think fondly of their countryside; it’s here that green fields of grapes roll down to small villages producing exquisite champagne and the smell of warm baguettes is accompanied by the finest of cheeses. Sure it’s not all Dom Perignon and Lingerie, but there is an artisan approach to almost everything they do. It’s this exact philosophy that Sur Les Chapeaux De Roues take to building bikes, more watchmaker meets sculptor than simply mechanic. And from the beautiful department of Finistère they deliver their latest gift, a melt in your mouth BMW R850R. 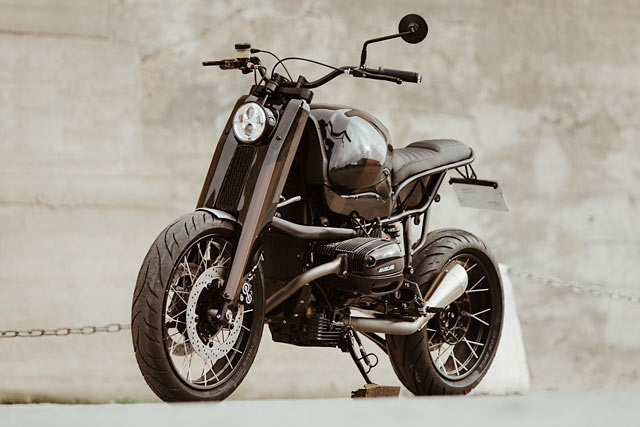 This is by no means the first SLCDR bike we’ve covered, and whether they’re building a drag machine for Sultans of Sprint or a weekend warrior for a client, each and every build is like no other. Over the last year, head honcho, Manuel Jouan has spent considerable time and money outfitting the workshop with the latest tools and machinery so that everything can be done in-house. The factory trained mechanic can do it all and with such an artisan approach, start to finish under one roof makes a hell of a lot of sense. 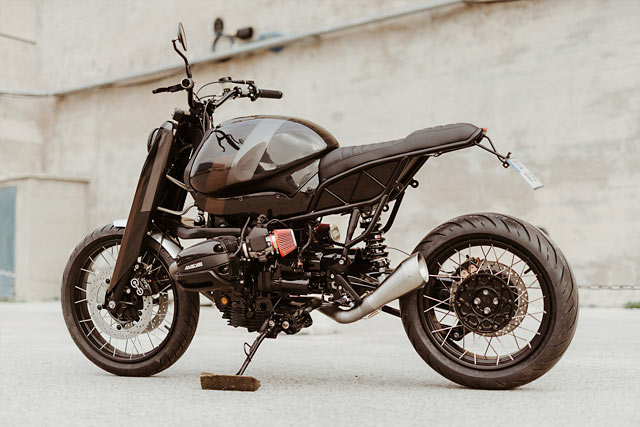 While working away one day the familiar sound of a BMW boxer engine could be heard coming up the drive. The bike, a 1996 R850R, had been purchased new by the owner, still in totally factory spec and showing a mere 32000 km on the clock. That’s just getting a BMW warmed up and with the bodywork showing its age the proud owner was keen to hear what Manuel could do to customise his steed. The builders first impression was polite, but to the point. “Ugly, with this telelever front end,” Manuel smiles. But as he pondered things more, he realised it was a challenge he wanted to take on. And not only build the R850R but to keep that unusual suspension setup and make it look better than it ever has before. So the deal was done and the Boxer would be reborn at SLCDR with the goal of giving the bimmer the form to match its exceptional functionality. Before the build started the very first task was to rip off the hideous 3 spoke mag wheels and replace them with new spoked GS items wrapped in Avon rubber. 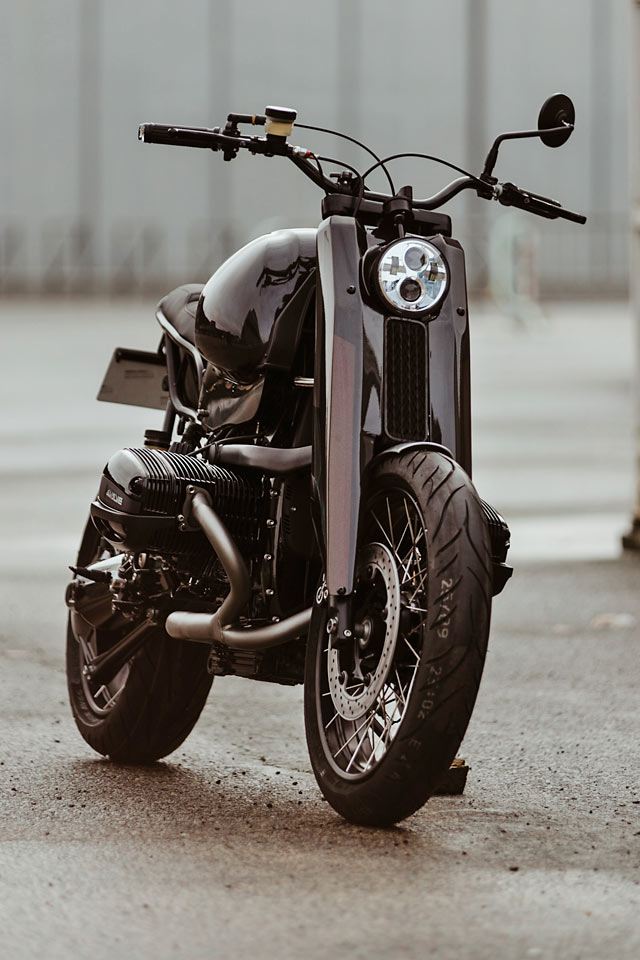 Up on the bench and Manuel tore in, ripping off the seat, the ugly plastic rear end and all the accessories that obscured his vision of the barebones. Immediately he knew what had to be done, the spindly front end needed some brawn. To shield the forks he designed in his head a cover like approach that would give a single piece look. But in reality it was much more difficult to construct, “It’s 20 pieces of steel all handmade and welded by myself,” he smiles.

[superquote]“Immediately he knew what had to be done, the spindly front end needed some brawn.”[/superquote]

What makes the work even more brilliant is the way it seamlessly incorporates the engines oil-cooler into the structure for a muscular grille like effect. The headlight too is integrated flawlessly into the design and the whole piece moves as one with the stroke of the suspension. There is also a tyre hugging hand-made front guard in place and to improve the performance the factory single coil over shock has been upgraded to a fully adjustable part from YSS. 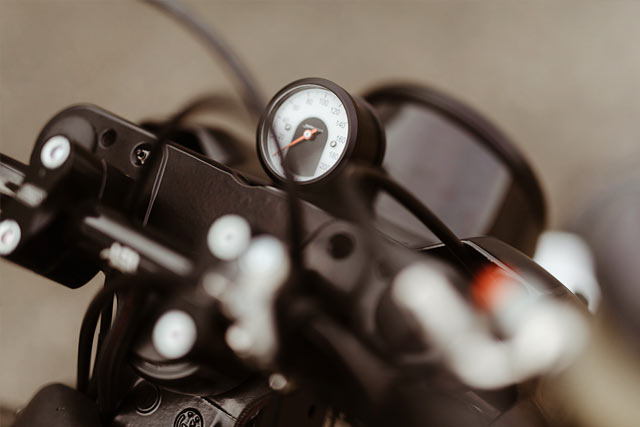 With the front end complete the entire rear subframe was cut off and an all new piece fabricated; the redesign transforming the dorky BMW styling into something sleek and sophisticated. The beautifully upholstered seat perfectly hugs each contour and the integrated LED lighting provides the ultimate in clean finishes. Under the seat the electronics are perfectly hidden behind aluminium covers and lattice steel. While another YSS shock gets the gig out back and rebuilt brakes complete the roller. 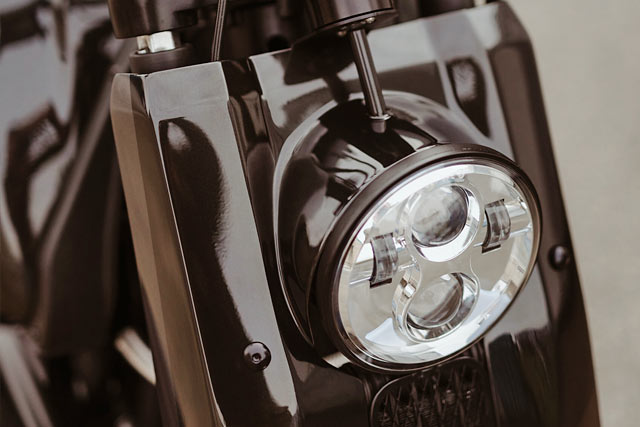 From the factory the four valve 850cc engine was never known for making huge amounts of power, but torque it delivers in spades. So, much of Manuel’s efforts on the mechanicals have been focused on unleashing some extra ponies. The airbox has been removed to save weight and a pair of quality BMC filters fitted. While the exhaust is a brilliant 2 into 1 system that delivers an epic sound from the high-end Spark muffler while revealing the open side of the rear wheel. 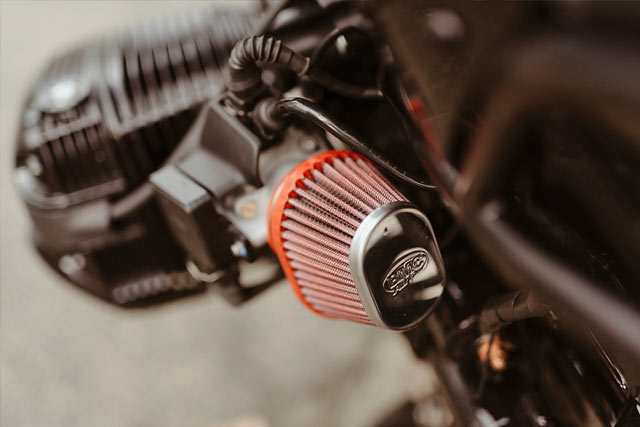 To finish it all off Manuel was joined by friend and painter David, who split the task of laying down the colour. With David focusing on the tins and brilliantly ghosting in the graphics and logos using subtle changes of hue for a million dollar finish. The controls are completed with a host of Motogadget parts to match the overall quality of the build, and from bland as butter BMW to custom sculpted masterpiece the transformation is complete. So the wine and cheese will have to wait, as this precision German utility has been given a French craftsman’s makeover that’s impossible to resist!