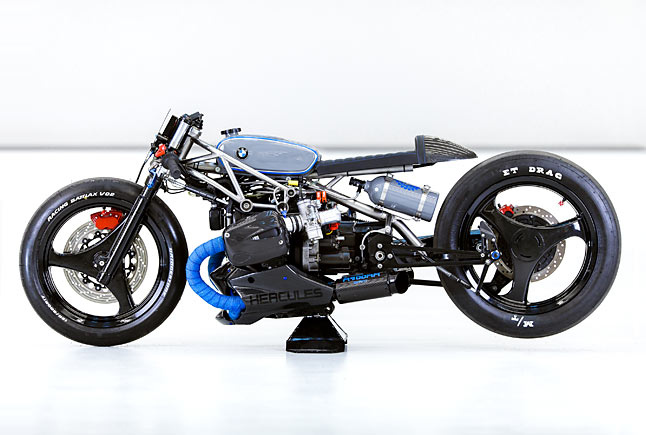 They call it ‘group therapy for speed freaks on two wheels’ and with the 2018 season just weeks away from commencing, the heavy hitters are rolling in for a fresh dose of petrol powered psychotherapy. The Sultans of Sprint drag race series will kick off in Monza, Italy, with a weekend of 1/8th mile action and one of the original campaigners is back again chasing glory. German BMW maestro Philipp Ludwig returns having spent the winter months fine tuning his steed at the small workshop that’s home to Team Kraftstoffschmiede. Now ‘Hercules’ is ready to slay them in style, defying the once beyond bland BMW R850R that left the production line in 1998. In the early days of the series Phil ran an older 2 valve BMW he nicknamed ‘Catkiller’ but with its power threshold reached and always one to look outside the box, he went in search of a totally different motorcycle. Well, different so long as it was a BMW, as he’s made his name first restoring classic versions of the marque before taking them to the stratosphere of the custom scene with a whole range of various Bavarian bruisers. But with a day job to occupy his mind, the down time he gets in the shed had to be put to good use and going racing would bring the right mix of challenge, comradery and fun.

Hercules saw action in the 2017 series and a top ten season finish shows the serious potential of the left field choice. “The basis of Hercules is a basic old mans bike that is not even nice to look at. But I am sure the the renaissance of the r259 models will come,” he says with a sly grin. But strip off the strange Telelever front end, unbolt the three piece frame and look past the daggy aesthetics and underneath the skin of the R850 Phil saw plenty of potential, “I wanted to create something new with a little more modern engine technology. This technology has reached fantastic lap times during the legendary BMW Boxer Cup days in the 2000s.” Last season #46 was campaigned in the BMW motorsport white livery, but with the engine out for the off season a new colour scheme was planned to match the new found performance. That engine is of course an air/oil cooled, 4 valve boxer lump with a standard capacity of 848cc. To fund the build up all the stock parts from the factory bike that weren’t to be used have been sold off. And with some friends at the BMW engine department Phil was able to source new pistons and cylinder heads. Chasing more power the major change for 2018 is a switch from the 2 into 1 exhaust to an all new twin pipe setup.

[superquote]“The package is good enough for over 100 RWHP, but flick the red rocket switch and Hercules really comes to life.”[/superquote]

The wrapped headers help to keep exhaust gases moving fast and engine temps down with the system dumping out of a pair of lightweight carbon mufflers. But to create the flames they spit, it all starts with air being drawn through the massive Dell’Orto carbs that feed each pot. The package is good enough for over 100 RWHP, but flick the red rocket switch and Hercules really comes to life. The bottle under the seat gives the game away with a 40hp shot of nitrous entering the engine via twin foggers mounted in the inlet tracts. The problem with the R850R as a drag bike is the unusual frame has the engine as a stressed member and the rear section mounted off the gearbox. What Phil needed would be an all custom item, that would be significantly longer, lower and support a conventional front end. “With these thoughts in mind I went to my friend Franz and many cold nights in his garage followed. Franz has the patience that I am lacking, and the goal was to create a chassis that eliminates wheelies which may cost time and a potential race win.” The results are stunning, with the sprinter’s tubular trellis frame weighing just 7.9kg and positioning the engine further forward for superior distribution of mass. To simplify things further there is no rear suspension, the side walls of the M/T drag slick doing the dampening when the throttle gets pinned. Up front a Bridgestone slick cuts through the air, swinging below a set of conventional forks, valved to keep movement to a minimum. With limited run off room at many of the events Phil wasn’t going to mess around with the brakes, big drilled discs at both ends get clamped by a set of Brembo calipers. With no BMW factory-fitted panniers to carry, the bodywork is kept simple, “I had a small seat and a Hercules Tank in my Garage that I decided to use,” explains Phil. The tank is now steel grey with blue accents and a German flag inspired racing stripe all designed to win over the crowd for the new season. The seat remains the same but there is more carbon fibre than ever with the addition of the lower cowl and fairing giving the bike a streamlined look for 2018. With style points also up for grabs in the series, the Nitrous bottle has been given a matching coat of paint and the carbon fibre valve covers only add to the beast’s beauty.

The racer’s colour matched footpegs extend rearwards almost to the wheel centreline, no fun for a trip to the shops, but it gets Phil’s weight positioned perfectly. There is a steering damper to prevent speed wobbles and with the bars down on the lower clamp you don’t so much as sit on Hercules as lay on him. The fact is this BMW throws off its go anywhere touring style and is singular in purpose; revs, dump clutch and beat the other guy to the end of the 1/8th mile. But embracing the group therapy ideal the Kraftstoffschmiede creation ticks one last box. As Phil describes its a “crowd magnet, a base for discussion and exchange with fellow petrol-heads.” And even with it just sitting still, we feel better already!