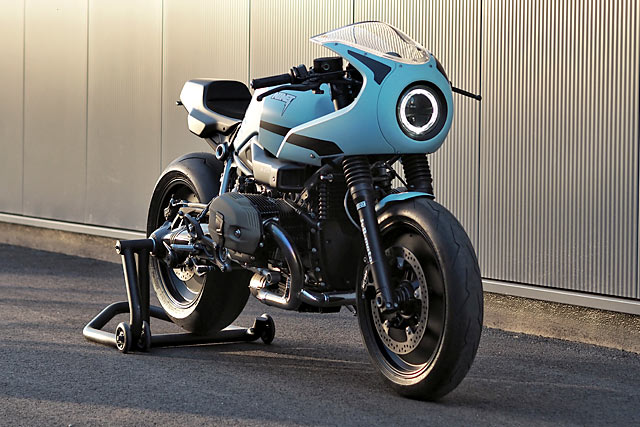 Do you own a BMW RnineT Racer and have the sore wrists to prove it? Well, we at Pipeburn know what it’s like to suffer for a bike that you love. But fear not, JVB-Moto are here to help. The German parts manufacturer have turned their trained eyes to the Racer and managed to make it more comfortable and even better looking. Feast your watering eyes on this, their latest creation they’ve dubbed ‘Two’. It’s been christened the ‘Two’ as it’s the second RnineT Jens Vom Brauck and his team have customised. The first was an ultra clean and simplified Scrambler. But Jens is always on the lookout for more projects and as soon as he spied the new Racer he fell in love – but he also spotted one major flaw with the bike right away. ‘The riding position is very uncomfortable,’ he says, ‘I think an English magazine voted it the most uncomfortable stock bike of all time’. Now that’s quite a claim when considering some crippling Italian race-spec bikes out there but there’s no two ways about it – the Racer has a back-aching, wrist-bending riding position that’s fine for the track, but a painful proposition on the road. Jens took this as an opportunity to sculpt some parts to try to shift the riding position. But while he was there, there were also some cosmetic changes to be made; ‘I liked the NineT Racer as soon as I saw it,’ he explains, ‘I just wanted it to look more clean, minimalist and aggressive’. First in line to cop the JVB treatment were a set of carbon fibre wheel covers. While there’s all sorts of rationale for such a modification – I’ve heard everything from keeping your spokes clean to increasing aerodynamic efficiency – in this case it’s entirely cosmetic. The covers help keep the bike looking unsimplified and give it a solid, grounded appearance. And above the front wheel sits the first of a host of new JVB-Moto parts, a tidy little new front fender. More new components are scattered throughout the bike, but not all of them are from JVB themselves. The ‘Two’ has a front LED light, new handlebars and top triple tree by LSL and tiny little LED indicators at the front and rear, while the engine benefits from a booming Arrow exhaust system. But Jen’s favourite part is their own design – a new airbox cover which is more angular and better matches the lines of the standard BMW fairing and their new seat. And that seat with its integrated tail light is one of the nicest aspects of the bike. It looks like it could be stock but there’s some subtle changes that make it work with the lines of the racer. ‘The design is more or less similar,’ Jens admits, ‘but it has harder edges to match the fairing. Every surface, every angle and every detail was redone to fit the R9T’s racer lines, tail frame and fuel tank.’ And it allows the Racer to be ridden for more than a few hours at a time. ‘It’s not only higher, but it allows you to sit further forward. It makes for a much more comfortable riding position.’

[superquote]“And that seat with its integrated tail light is one of the nicest aspects of the bike.”[/superquote] Being a parts designer and manufacturer has many challenges for the team at JVB-Moto. ‘Building a one-off custom bike is one thing, but getting parts into production for a kit is another,’ Jens says. ‘It takes a lot more effort to build every part with the idea of making it reproducible and bolt-on. No cutting or welding on the frame and everything has to be super solid and road legal. And in the end you have to find somebody who can build the part and deliver it for a price that makes sense for me and my distribution partner KEDO and the customer…’ But BMW RnineT Racer owners should rejoice. They’ve got an incredible looking seat that’ll go a long way to making the Racer an all-day proposition and a front fender and airbox cover that suit the standard bike much better. A custom that’s not only better looking but is more comfortable than stock is nothing to scoff at. The last twelve months have heralded some big changes for Jens and the JVB-Moto team. After fifteen years they’ve moved to a bigger workshop that, while significantly less cool and ‘rustic’ than their last premises now features heating and actual room to move around.  So keep an eye on what rolls out of their workshop in the coming year. What  bike do you think they should focus on next?