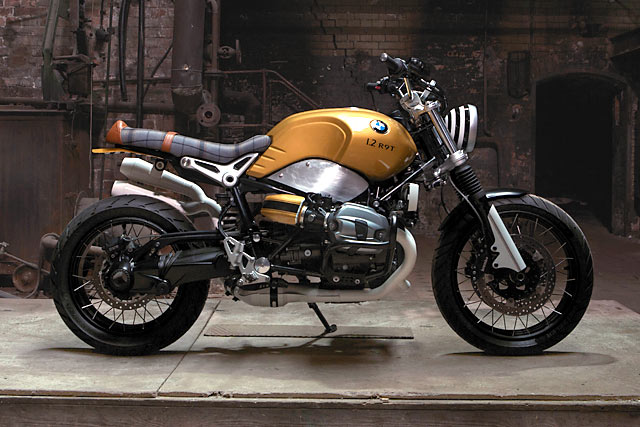 You know life is going well when you wake up one morning, wander outside and there in your driveway is a brand new motorcycle. Things get a whole lot better when you didn’t a dollar and it comes direct from the manufacture with the simple instruction to get creative! California customiser Hayden Roberts had previously done a commercial with BMW years earlier where the idea had been raised of him building them a bike. But it wasn’t until he saw the 2017 BMW R nineT greeting him that he remembered the conversation. The result is the latest incarnation from the Soul Fuel Challenge, a collaboration between BMW and Hello Engine USA that’s produced this stylised Scrambler with plenty of Bavarian-inspired 1970s appeal. Creating a BMW Scrambler with old school elements makes a hell of a lot more sense when you know Hayden’s background, “I work in Ventura County, California. Building desert bikes that stopped being competitive 50 years ago and restoring/repairing vintage motorcycles. I split my time between the shop where we do service and repairs and my home shop where I do complete builds and faff about on my own bikes.” And if it’s scrambling that you’re into there are few better places on earth than SoCal, with a long history to match the incredible location. So it made perfect sense for BMW to select Hayden to take one of their factory Scrambler versions of the highly popular model and let him loose. The BMW Soul Fuel Challenge has been running ever since the first R nineT came to market with builders the world over invited to go all out and produce their own unique machine from the stock platform. This commitment to the custom scene by BMW has not only resulted in some incredible builds, many featured on these pages, but also been a big part of the sales success and aftermarket industry that has grown around the bike.

But it’s the visual aspect of this particular nineT that’s unlike any we’ve seen so far and that largely comes down to the colour choice. “As with any project, the most difficult part ends up being the paint – how bright am I gonna make this one,” explains Hayden. While the finish is perfect its the particular hue chosen that really makes for the talking point. “The Ceylon Gold paint and black stripes came straight out of the early 70’s catalogue” With the colours popularity peaking in 1973 being used on everything in the BMW lineup from the E9 to the 2002. The Ceylon Gold is primarily applied to the factory tank with black detail work breaking it up so not to be overpowering. The same design is replicated on the small custom-made rear fender and the handmade air filter guards. But there is also a second colour scheme added to the BMW to catch the eye reserved exclusively for small corners of the build. Black and white stripes adorn the headlight bucket and the underside of the rear fender, a little flair for the otherwise understated. Of course nothing says BMW in the 1970s like a little plaid and the seat is resplendent with just the right combination all tied together with leather. One of the clear philosophies to Hayden’s builds is losing weight and looking at the nineT he knew exactly where to start. “All the emissions and sound compliance bits were chucked into the bin. BMW’s flat rate for an airbox removal is billed at 8 hours, it takes 8 minutes with a sawzall.” With the big airbox removed the factory air intake and associated panel work has also been removed with a simple brushed metal piece filling the void. The new air filters allow the boxer to breathe a little better but it’s on the exhale where things get serious.

[superquote]“BMW’s flat rate for an airbox removal is billed at 8 hours, it takes 8 minutes with a sawzall.”[/superquote] With the weight loss program including the exhaust, any of the factory obstructions that rob power are now sitting in a bin. The rest is finished out with custom pipe work and twin cans to give it the appropriate roar. The colour of course can’t be missed, another throwback to the days when many race cars ran white ceramic coated headers. A remap of the ECU and not only are some extra ponies released but the fuelling is now spot on. But all the factory niceties remain with Hayden determined to keep the bike in a very rideable state. But don’t think the throwback items stop there. The iconic S.E.V Marchal fog lights serve as form and function. An item no BMW race car of the period was seen without whether tackling an endurance event or competing in the Rallye Monte-Carlo. The front fork guards come from the same line of thinking, serving form and function with the beautiful welds left exposed. So just how versatile is this brilliant, scrambling BMW? About as good as it gets explains Hayden who built the bike in a staggering five weeks, “It’s completely functional and something I enjoy riding. I built this bike for a show tour so it spent months on a platform having its seat fondled event after event. This fall I flew to Germany and my wife jumped on it, won a couple of drag races at Glemseck and then we rode it across Europe.” It’s fair to say this hell of a nineT can do it all.