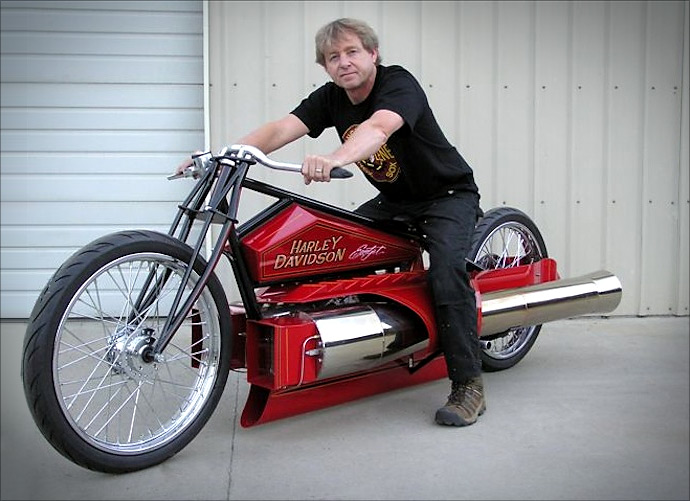 OK, this is getting a little silly. Bob Maddox, possible lunatic and the world’s pre-eminent expert on pulsejets, has just finished his latest creation. Not content with his pulsejet boardtracker we featured previously on Pipeburn, he’s gone and mounted a monster pulsejet with a split exhaust onto a bike he’s calling the Harley Davidson Sportjet. Apart from a Harley-ish tank design I’m not quite sure what it has to do with Milwaukee, though it would seem about as safe as your average Harley and probably has the handling to match.

Bob says it’s good for 250lbs of thrust and 200mph down a quarter mile. By the looks of the videos it’s also good for digging ditches and melting pick-up trucks. As always with Bob’s creations, the styling is bang on – check out the 1920s pin striping and the beautiful metalwork around the rear wheel.

With that said, I’m not sure how keen I’d be to ride a bike with no suspension, a sprung saddle and spoked wheels at 200mph. Hell, you be hard pressed getting me to ride the thing at 60mph. But that’s just me – little ol’ Mister “no thanks, I don’t think I’ll put that barely-controlled explosion box near my crotch” Jones.