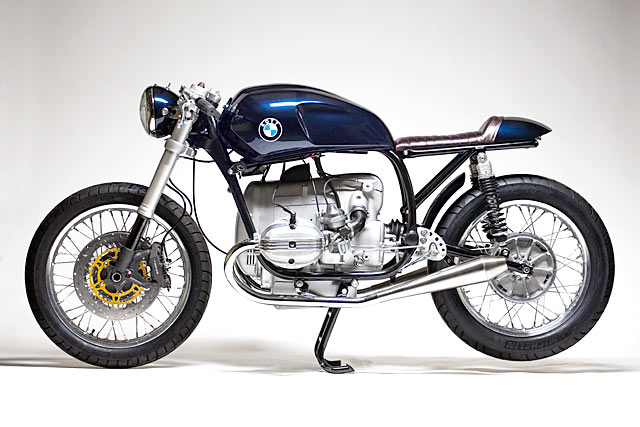 At a chaotic moment in history, it’s worth reflecting on the words of Bertrand Russell “The fundamental cause of the trouble is that in the modern world the stupid are cocksure while the intelligent are full of doubt.” Russell’s logic is born out in the back story to today’s incredible Cafe Racer. One look at the catalogue of builds by California’s Kott Motorcycles and you know they can spin a spanner. But brilliant builder Dustin Kott was apprehensive about taking on the project having never worked on a BMW before. He needn’t have had any doubt, as he’s turned a once bulky 1977 BMW R100/7 Tourer into a sleek and slick Cafe Racer. Kott was taking a rare moment at his desk when the client first made contact “In the process of answering emails, the request came through for a custom BMW build. I reminded the potential client that this was not only a machine which I had never built before but also had little to no knowledge of how to even approach or price this project. One short phone call later the customer simply stated that based on the gallery of bikes on the Kott Motorcycles website and some of the videos he had watched about the shop, that he implicitly trusted our capabilities and that we should move forward with the build.” Dustin had also been tasked with finding the donor bike but just when he thought he’d done a deal the owner literally backed out of the sale with Kott standing there cash in hand. Luckily the Kott customer had also been on the hunt and turned up this particular bike before shipping it out to the SoCal shop. “Apart from the inspirational confidence that the client placed in the shop’s capability, inspiration came from the thought that our trademark stylistic approach would work just as well on the BMW as it had on any other brand we had customised before. Confidence, ultimately, turns out to be a cornerstone of inspiration.” With the mental side of things taken care of it was over to the physical labour and the bike was completely torn down with the engine removed for a freshen up. To create the narrow and nimble rear end he was after Kott turned to the talented folks at Metal Lab Fab. The guys went the extra mile, constructing a jig so that vital considerations like suspension mounting and alignment, stability and strength were all taken into account in the process. With the new subframe mounted up Kott focussed his attention on creating the neat little hugger rear guard and smoothing out the entire frame before hitting it with a coat of black paint. One thing that is synonymous with a Kott Motorcycles’ creation is the ultra-clean lines and incredible bodywork. The BMW is no exception but the tank comes from left field with the donor bike being a mid-90’s Yamaha XJR. The exaggerated dimensions of the large, swooping lines accentuate the minimalist rear end for Playboy model matching proportions. The tail-piece is done the old-fashioned way, hand forming metal with tools that are centuries old. As always the result is flawless with vintage brown leather providing the covering for the seat. The metal work receives a blue coat, deeper than the Atlantic, with a subtle change to the BMW logo so you know who really built this machine. To get the bike handling as good as it looked, Dustin knew there was no point wasting his time with stock items and simply went for the best. A task made much easier thanks to the engineering genius at Cognito Moto who supplied the custom triple trees and stem that allow the fitment of cartridge style GSX-R USD forks. With the bike coming with factory fitted mag wheels, Kott wanted a more classic touch to balance out the modern fork setup. Thankfully his search turned up a rear spoked hub/diff with the front hub courtesy of those fine folks at Cognito Moto once again. Kott is quick to give them credit, a big tick of approval coming from such a well-respected builder. “I realised that not only had these guys pretty much beat everyone to the punch, they had perfected their proprietary front hub design and triple clamp assembly.” Out the back, the rear gets a set of adjustable shocks fitted with progressive rate springs so the BMW can really be dialled in for the new owner. While the brakes get a serious upgrade with the GSX-R also donating its twin drilled discs and Tokico calipers. It would be criminal to fit the stainless spoked wheels up with anything but good quality rubber and the set of Michelins is exactly that. With a Cafe Racer this cool it would be more than a little embarrassing if it didn’t start when you went to leave your favourite bar. So Dustin has rewired the bike from scratch and given it a total electrical overhaul. “The original starter motor, which is about the same size as the one on my 1966 Ford pickup, was replaced by a new lightweight version that could still be cranked over by a battery that is literally a quarter of the size of the stock unit,” explains Kott. There is also a new charging circuit and rotor with a high output stator and new regulator/rectifier. Problem solved.

[superquote]“The original starter motor, which is about the size as the one on my 1966 Ford pickup, was replaced by a lightweight version.”[/superquote] The big 980cc boxer has also come in for a makeover and if you’ve ever started one up, you’ll know those first few seconds on the choke feel like you are about to go 12 rounds with Mike Tyson. But as the big pistons get up to speed punching parallel to the ground, they now seal perfectly thanks to new rings and dismiss their charge via updated exhaust valves. You could do your hair in the reflection of the new header pipes and the raw stainless reverse cone mufflers strike the perfect balance between custom and classic. Of course, with every Kott build come those little touches that just make it something special. The handcrafted rearsets are a brilliant vintage touch and flow seamlessly around the swingarm pivot. While the clip-on bars give the full Cafe Racer feel and wear only the barest of essentials, grip and rip is what it’s all about. Despite his initial doubts in even taking it on, there is nothing cocksure or thoughtless about this build. Kott used his own immense skills and the best vendors to deliver the result and that’s his biggest take away from the project.“The fact that there is now an established community of builders and shop owners that can turn out a machine of this quality is truly unique,” says Kott. And we don’t doubt it. See the bike in person at the inaugural “Outliers Guild” Show in Downtown L.A. on May 5-6th.