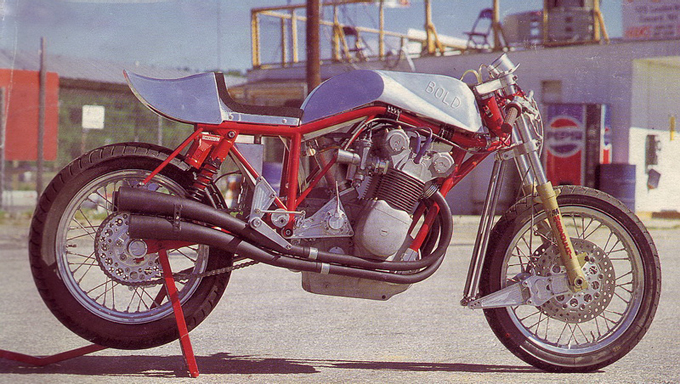 No it’s not the latest bike from Shinya Kimura, this blast from the past was originally featured in Australian Motorcycle News back in 1998 – which doesn’t feel like 12 years ago. Built by the talented Albert Bold of Bold Precision in Pennsylvania. Albert is well known for possessing bike building skills unmatched by many in the industry. Not many machinists can say they have turned cast-iron manhole covers into brake rotors like Albert has done in the past. Bold estimated that more than 2000 hours went into building this unique MV Agusta Racer. The reason being that he had a philosophy of no bolt-on parts if he could do it himself. “About the only corner I cut was the brake discs,” he said. “Those manhole covers worked great on the first bike, and the material was free – but I just couldn’t face the 40 hours of machining work to make each one, so this time I compromised and used Mercedes-Benz’ discs on the front, which I machined down to size, and a Subaru one from the local parts shop on the back.

The above photo was taken by motorcycle journo Alan Cathcart, and Bold told us not long after he took the photo Alan crashed it. “The bike doesn’t look like that anymore. Alan crashed it right after the pictures were taken, so I had to make another seat and tank” said Bold. Looking at the amount of work Albert put into building this cutting edge MV racer it’s sad to hear that it now hangs on a wall in Albert Bold’s garage. You can read the original and entertaining story on the Bold Precision website. [Thanks to Alan].