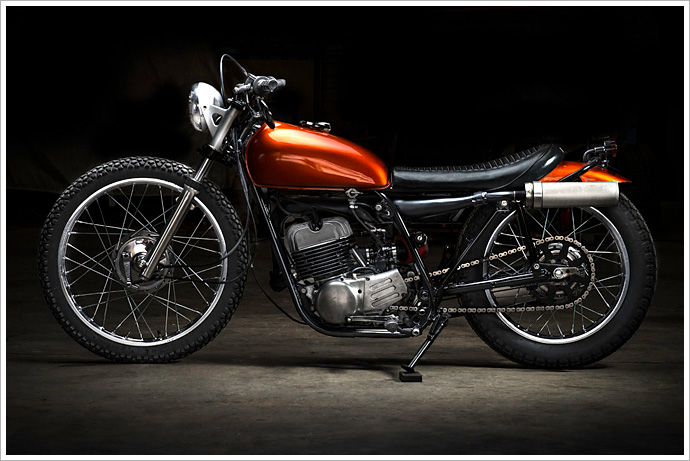 Adelaide gets a bit of a bum rap as far as Australian states go. Ever since a really disturbing sequence of events took place there in the ’90s, it’s been referred to by fellow countrymen as Australia’s ‘mass murder capital’. And the label isn’t without warrant, as the stats show that South Australians are much more likely to end up becoming a bunch of bones buried in a backyard than the rest of the country. Enter a guy called Heath, someone who is, we’re glad to say, quite the opposite. He’s called his shop ‘Boneyard Customs’ as he likes to resurrect old, scrap bikes from the dead and turn them back into living, breathing, roaring rides. Which is just what’s happened to the bike you see here. We’re sure you’ll agree when we say it’s a killer too, just not in the serial sort of way. Here’s Heath “Twigz” Twigden. “I am from Adelaide, South Australia, I run an after-hours workshop called Boneyard Kustoms which resurrects bikes and other bits from the boneyard. I customise anything I can get my hands on, but mainly 70’s Japanese stuff. From a young age I remember Dad taking me to the Speedway, and this has influenced my style of bike building. I like the Speedway bikes for their real lack of clutter.” “When I first started working on motorcycles, I could only ever get my hands on the small capacity bikes – but I still love working on them to this day because they are small, light and relatively easy to work on, and there are literally endless options for customising. I got my first bike at the age of 12, and have rarely been without one since. ” “Like many custom bike guys, I started mucking around with push bikes from a young age. Mainly just stripping and painting, swapping out parts and adding fatter rubber. Years later this grew into full custom pushies, and welding up bikes pulled from hard rubbish. The longer and lower the better – although they are barely ride-able, they look so damn cool!

The natural progression from this was custom motorcycles. I built my first bike in 2007, a ’72 Honda CB350 in a bobber style, which was completed with a lot of hand-made, one-off parts and spares from two separate donor bikes.” “Fast forward to now – and the ’74 Yamaha DT250. The idea behind the bike was a flat track-style, street legal machine. I actually ride one of these bikes in Vintage Motorcross, and I thought it would be an awesome street bike. From an Ebay buy that was in very original and sad condition, to a nut and bolt restoration in house, the only thing I didn’t do was true the wheels.

The gearbox would not go past second, so the motor was stripped and rebuilt top to bottom. I blasted and 2pac’d the frame, put 9″ struts on the rear and some shortened forks from a Suzuki TS185 to get the bike much closer to the ground. I took the good chrome rims from the same Suzuki and laced them to the original hubs, which were blasted and 2pac’d cleared for a nice, raw finish.” “The paint is DNA Candy Orange which is very close to the original colour. The seat is the original, with the foam re-shaped with an angle grinder, and the cover re-streched. The rear guard was also cut down and re-shaped. The pipe is the original with an old junk pile muffler to keep it quiet-ish. Although not a highly modified custom, it was a very time consuming project. It is a light, fast, and scary bone rattler that is so much fun to ride. Nothing like blasting down the road sounding like a swarm of bees!”