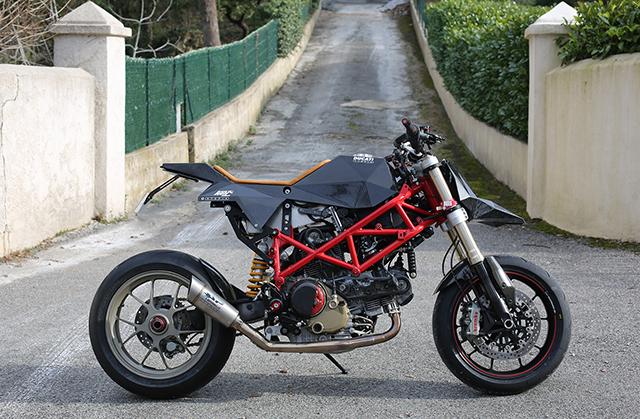 Written by Gerald Harrison – Owner of the The Zero Zero Ducati Hypermotard.

Meeting Giorgio Cerrato for the first time in the Spring of 2017 was a memorable moment, he was delivering The Zero Zero, his first Ducati Hypermotard under the guise of Vtopia Design, a bike he had been tinkering with for 7 years. The man is tall and waif-like, with a shock of black hair and more than a hint of a Tim Burtonesque caricature. The boy started competitively racing motorcycles at the tender age of six, reaching national championships and ultimately teaching circuit technique at a professional level, he subsequently graduated from Politecnico di Milano as an architect. His bikes are therefore a beautiful amalgamation of finessed design and the brutality of a full blooded race weapon. 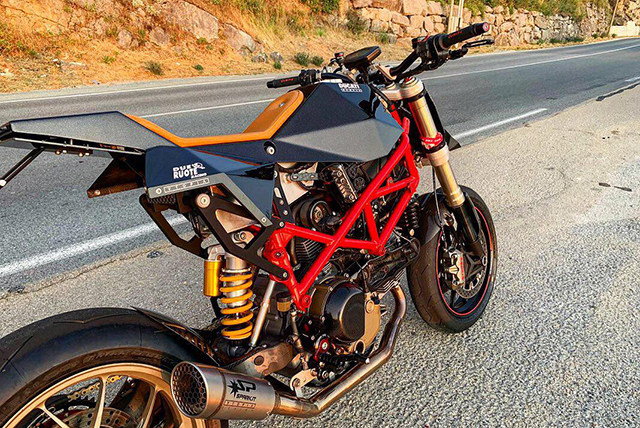 Steering away from the all too common retro custom, Giorgio is futuristic in his design, employing a carbon fibre monocoque, low poly forms and geodesic shapes. The result is a bike that looks wonderfully unusual and beautiful, in the same way as one of those oddly beautiful models you see in a high fashion magazine, it’s also mind bogglingly quick but not in the least bit frightening, easy to ride fast and instantly gratifying. When sitting astride a powerful bike I often feel intimidated but with the Zero Zero I am instantly at home and within the first few minutes of my initial test ride able to enjoy all of that tremendous torque, the majority of which is released low down the rev range so one doesn’t need to ring the neck of the beast to feel the effect.

In Giorgio’s words, the engine is “very angry,” (say it with an Italian accent) its rawness and the incredible noise coming from that single tailpipe is nothing short of biblical, it dissects the valley road near my house piecemeal, the short straights are made shorter and the corners are dealt with with incredible efficiency and precision. However, the bike is not without some quirky Italian flare; the front headlight which was peaking out from behind a number plate when I initially received the bike had some lyrics from a track by Israeli psytrance duo “Infected Mushroom” inscribed on the back, why?  Giorgio only knows! 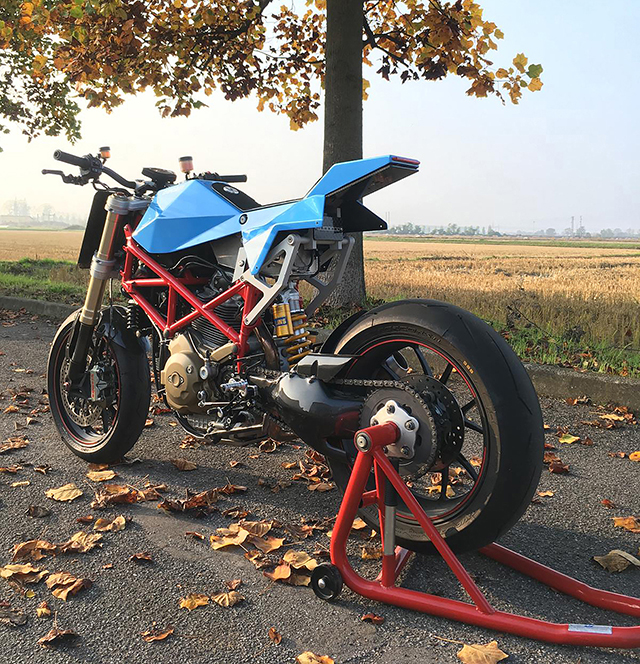 Giorgio’s father, a keen Ducatista himself, supplied him with the donor 1100S in 2010, initially the bike was pressed into regular service but Giorgio found the stock bike too heavy and he yearned for more agility so, in short order, started adapting the bike and developing the kit which would form the basis for his business Vtopia (using the Roman spelling V, it’s pronounced “Utopia”) Design, which has since produced 3 Scrambler, 4 Vyrus  and 12 Hypermotard kits that have either beeen built by him or posted to the client ready to install.

The Zero Zero being the prototype, was a rolling test bed and after five years of research Giorgio consecrated two years, full time, to produce that first example. With a near-maniacal attention to detail every single component of the machine has been considered and often upgraded usually with one-off components, using cutting edge technology to do so. You will not find an English Wheel in Giorgio’s workshop, instead a battery of computers, a 3D printer, CNC machine and vacuum former as well as the usual array of mechanic’s accoutrements. The majority of the workmanship can be found in the headlight frame, subframe, tank and of course that spellbinding monocoque body. A simple example of the seven year process would be the handlebars; not happy with the first handlebars   Giorgio put on the bike, nor with the second or indeed the first fourteen pairs he tried, he finally found satisfaction with an American built item. Now just multiply that level of fanaticism with the entire bike. 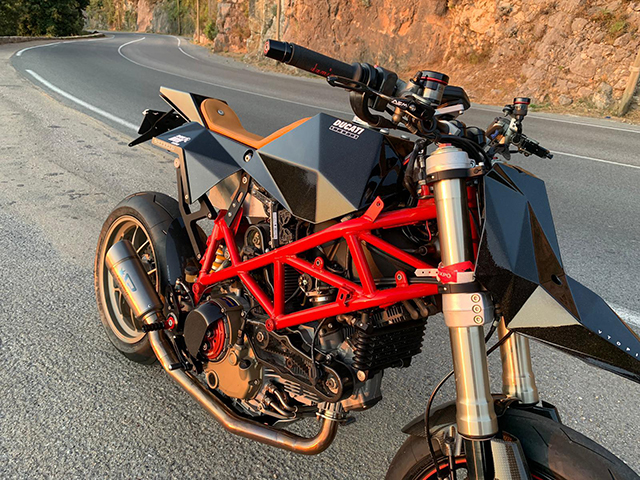 The position of the exhaust outlet was also a serious consideration for the master at work as its position effects the torque delivery, as a non-mechanic this blows my mind! The exhaust was built in house, in conjunction with Spark and a custom ECU installed. What does this give you? More Ducati with a little taste of Vtopia, the bike tips the scales at a mere 132kg an almost unbelievable 40 kilo weight saving on the original bike and 100bhp on the dyno, the engine remap delivers all the torque in a massive dose almost as soon as you twist the throttle, the acceleration is explosive and sitting bolt upright it feels otherworldly fast.

Please allow me to now fast forward to the 7th of February 2018. Whilst filming for Oil In The Blood, after a long day of endlessly riding up and down the same stretch of road in the biting cold it was eventually time to head home. As we rounded a corner, a large pile of rocks had slipped off the mountainside onto the road, determined to point these out to my compadres following, madly gesticulating towards the rocks I took my eyes off the road and ever so gently merged onto the other side of the road. My awareness of the oncoming Jeep Wrangler somehow second on my list of priorities, I only noticed it moments before impact. I had time to jam on the back brake, my right hand too busy feverishly pointing out the stupid rocks, and the back end of Giorgio’s beloved Hypermotard connected with the unforgiving front bumper of the SUV. 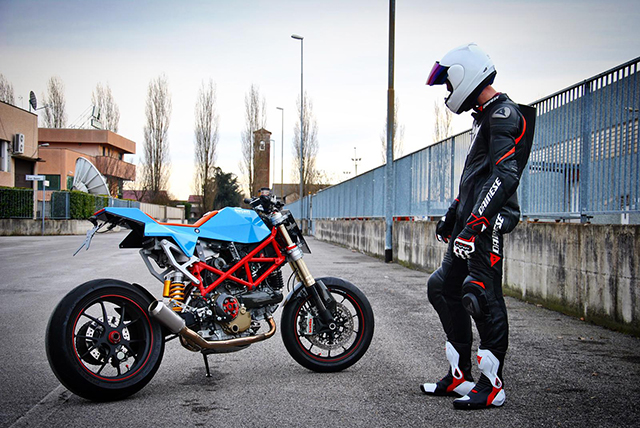 Now, everyone always says “so long as you’re not hurt, everything else is fixable” thankfully I did walk away from this accident virtually unscathed but bear in mind that for Giorgio this is near as damnit a member of the family, he only sold it to me because I live so close to him and he can come and visit it whenever he wants to, he shed several tears that day, God only knows how he’s going to react to this catastrophe. I briefly consider seducing his mother as a perhaps more acceptable distraction! In the end Giorgio, who by now is a firm friend, was more worried about me than his bike. Within a few days I unceremoniously dumped the twisted carcass in my trailer and drove the sorry mess to his garage. A combined speed of about 80 miles an hour had snapped the back end off the bike, I shudder to think what it could have done to me had any part of me got in the way of the impact.

A year later Giorgio brings the bike back to me, I had given him carte blanche to do whatever he wanted with what I still feel is “his” bike and what comes back to my garage is quite breathtaking. When I received the bike in 2017 it looked like a child’s candy, bright blue, for no reason whatsoever Giorgio thought it would be nice to give me a second body, it was dark blue and hazy gold. The third iteration now stands before me; a stealthy black machine, the number plate has been replaced by the Darth Vader face of the standard Hyper but other details have been worked upon, a pair of beautifully crafted carbon fibre levers up front and the belt cover is now transparent, it has been formed from carbon fibre, the intricate work and eye to detail is not lost on me. One thing that has been left untouched since that dreadful day is the frame, of course it had to be quite literally bent back into shape but it still bears the little surface scratches and scuffs as a poignant reminder to always keep my eyes on the road. The gearbox is now upside down, which is a revelation to me, I now wish that all bikes were built this way.

Needless to say, Giorgio’s baby is not in mine, but currently his garage. Not that there’s anything wrong with it but because he wants to 3D scan it, I think he just wants to spend some time with it! With this Hypermotard,  as with all his work, Giorgio strives for a Utopian result and I can certainly vouch that this is my idealistic riding machine, for a young chap his accomplishments are astounding. His current and future Vyrus framed bikes are headline grabbers, with boundless imagination, we’ll certainly be seeing more extraordinary creations from his workshop in Pavia before long.

Although the Zero Zero was Vtopia Designs first custom motorcycle build, they haven’t stopped since. Below are some of Giorgio’s creative and downright mind blowing machines. 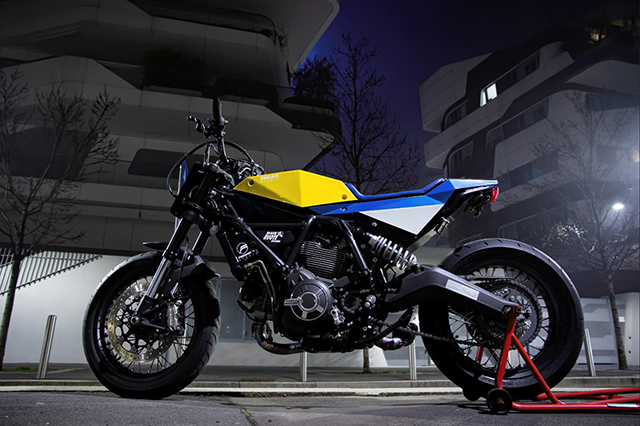 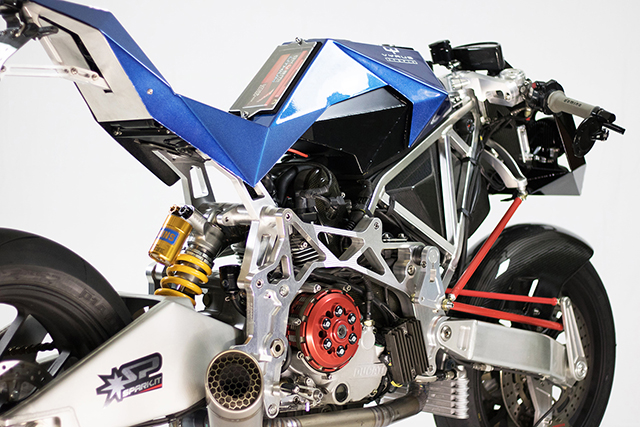 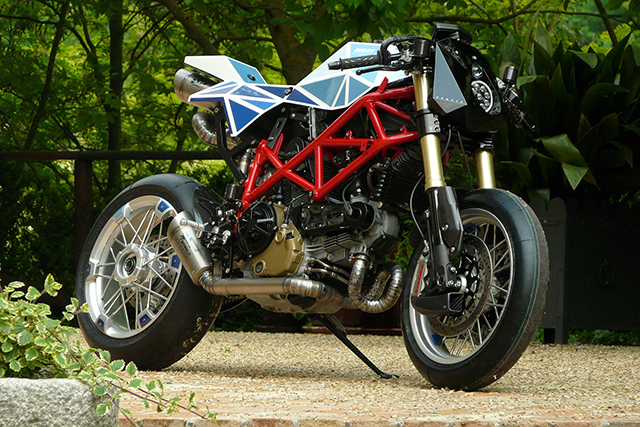