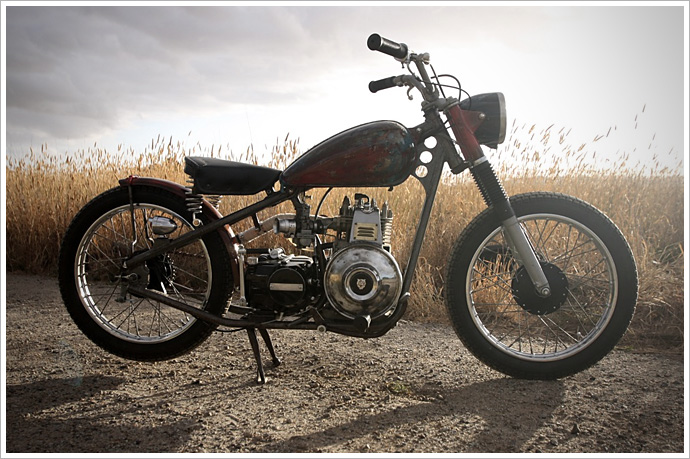 Any of us that have tried to build a custom bike for ourselves will know the pleasure and the pain that it can bring. For all the cool beers at the end of a day where you just sit back and smile and the progress, there’s an equal number of days where you think to yourself, ‘is this really the best used of my heard-earned?’ As the bills roll in and the unexpected speeding tickets, surprise tax bills, and other infuriating expenses mount, the chances of finishing the bike look more and more like a pipe dream. But what if you removed money from the equation almost entirely? What if you just used whatever came to hand and trusted your instincts and ingenuity over your wallet? What if? This if. Behold the coolest, cheapest and definitely the most unusual Honda CT110 we’ve ever had the pleasure of meeting. Seat and tank from BSA. Engine from Briggs & Stratton

Here’s the catchily-named Brenton Newton, the bike’s builder. “I built it for roughly $1200 using many random bits I have been hoarding for some time. A 1993 CT110 postie donor bike was purchased for $300 with the unused bits sold off to cover the costs of the bike. The wheels and front end are off the postie, but with the forks I have lowered them 40mm. The postie roller was jigged up on the work bench and cut up leaving just the headstock, so the rake and trail are the same as the postie.” “The engine side cover is custom made from
a jaguar hub cap and some sheet metal.”

“The frame is a one off by me, using only the Honda headstock and rear axle plates. The engine is a 305cc 8hp Briggs and Stratton ‘flathead’ engine as used in a pump or other industrial application. This was picked up off ebay for a hunge (that’s Aussie for $100 – Andrew). The engine side cover is custom made from a Jaguar hub cap and some sheet metal. The round button above the louvre is the kill switch. The cylinder head ‘spikes’ were turned up my me. The carby is of unknown origins but it’s a 28mm mikuni flatside, which I had bought years ago for another bike. It was surprisingly jetted very nicely for the Briggs engine, and the rubber boot bolted straight up to the original manifold… gotta have some luck occasionally!” “The exhaust is hand made from scrap exhaust bends I had lying around, then heat wrapped. The engine has been fitted with a alternator and flywheel off an electric start version, so I can run my headlight and taillight. The gearbox used to be a Lifan 125cc pit bike engine. I removed the top end and drilled out the counterweights on the crank to even things up. A blanking plate was constructed to block the hole where the cylinder used to be and the flywheel was sacrificed to modify into a drive hub for the 50mm belt drive. Machining the pulleys to suit the engine and gearbox from blanks was one of the more time consuming parts of the build. The belt drive guard is hand built from cheap and cheerful flat steel.” “The tank and seat are BSA Bantam items, and the patina on the tank was retained and clear coated. The headlight bucket is a modified CT110 unit with the speedo section shaved and smoothed. This was then given a patina then cleared. The rear fender is a modified CT110 front fender and was treated the same, ditto with the headlight ears. The bars are YZ80D items with the cross bar removed. The levers and throttle are repro Triumph.” “The pegs belonged to a CX500 and the forward controls and linkages were hand made. Most of the bike has been clear coated with KBS diamond finish, after the surface was given a distressed look. All small parts were tumbled in a drum full of gravel to achieve this. Most of the parts for this bike were just stuff I had lying around from other builds, and bikes I have had over the years. Likewise most of the frame and other parts were knocked up from all those awkward off cuts of steel from other projects.” “For something made out of what’s basically scrap,
I’m pleased to say it rides really well.” “For something made out of what’s basically scrap, I’m pleased to say it rides really well. It’s unlike anything else I’ve ridden, with all that flywheel weight it’s definitely all about short shifting and using the torque of the engine, as it doesn’t feel comfortable at higher revs. Thus I have put the tallest gearing I could find on it at 17/35. This was project was completed over the last 12 months in my parents shed, using basic tools and a MIG welder. I had bought a lathe around the same time as embarking on this project so it was a good opportunity to learn how to use it!” Posties, angry about what Brenton had done to their favourite bike, summoned a terrible storm