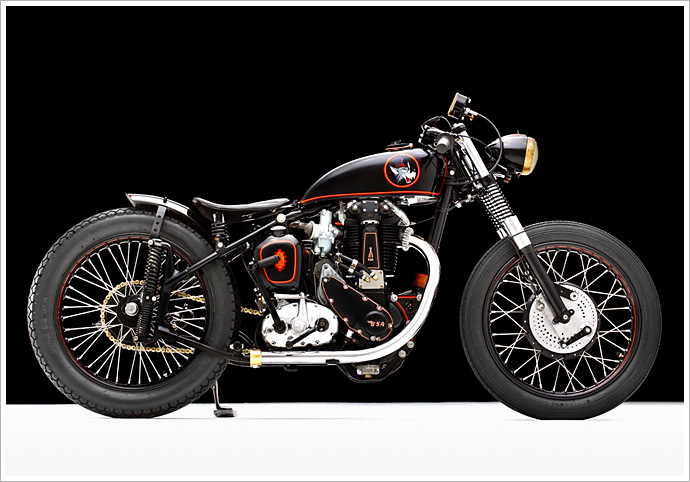 There’s a funny feeling you get in the pit of your stomach when you first start to customise a classic bike. It must be the same kind of feeling that an architect who is asked to modify a famous building gets, or an audio engineer that has to do a ‘digital remaster’ of a classic rock album feels. The excitement that builds from creating something new and original, mixed with the heavy burden that comes from modifying a classic. But there’s a simple remedy to this that I’d never considered until I laid eyes on this, the latest build from North Carolina’s pre-eminent custom bike shop, Briton Bees. And that’s to build the bike from not one, but ten different donor vehicles… including a VW Bug and a ‘30s Peugeot. Seriously. Please read on as you enjoy the world’s most recycled, um, cycle; the amazing ‘Howlin’ Wolf’ BSA. Here’s Emmanuel, Briton’s Queen King Bee. “Essentially, it’s a 1947 BSA B33. It took over 14 months to build, gather parts, modify parts, adapt parts and a good 200+ hours of work to get to were it is now. The bike, also known as the ‘Howlin’ Wolf,’ is the brain child of me, a French madman 2 stroke builder a.k.a. Briton ‘Emmanuel’ Bees, who now lives in Asheville, North Carolina.” As much as he’d probably like to, Mr. Bees can’t take all the credit for the bike himself. “Jake Hall of HCV Motor Sports who is an experience vintage AMA racer, Mechanic and craftsman of British motorcycles joined in the build and was instrumental in final build, assembly and tuning process. This collaborative build has seen it’s share of ups and downs; when working with vintage bikes no two are ever the same and every single one has their own unique quirks. The engine alone was rebuilt 3 times just to work out all the issues.” “But after a long journey this old beast was given a second life, being built better than it was out of the factory. And it roars and runs even better than it looks. The build was in honor of my father. The design is based on WWII Bombers, the Blues, US hot Rods and also a train from the 1900’s that had the same exact paint pattern and colors as the Howlin’ Wolf does.” A bomber, a train, and a name that honours America’s most famous DJ bluesman. Could this bike have any better a lineage? Naturally, the list of parts that the Bees supplied us is quite a doozy. Take a deep breath. It starts with a ‘47 B31 front frame, and a ‘50’s Goldstar plunger rear frame which they adapted to suit. There’s a ‘52 B33 bottom end and a set of ‘70’s A65 front forks, and rear springs from a ‘50’s plunger.

The gas tank is a modified, machined and silver-soldered Motobecane motorcycle tank from the ‘40’s, adapted with a Goldstar cap and breather. The speedo is a Triumph Chrono unit. The headlight is from a ‘30’s Peugeot, and the seat was made in-house. The ‘bars were an adapted and reversed BMW set. Surprisingly, it doesn’t stop there. The exhaust has a custom made brass exhaust trumpet, and adapted Triumph exhaust cooling fins. Wheels are WM2s – 19” front and back, with Avon MKII Speedmaster tires protecting them from the road. The go is provided by a Bob Newby Racing belt drive, a Thorspark electronic ignition set-up, an Amal 32mm carb. And the engine? It’s a B33 donk stroked to 654cc. As Emannuel puts it, “this is the only known stroked BSA B33 Iron Single with over 650cc we know of.” He modified the original crank with a 1” stoke and oversized Indian motorcycle roller bearings. Also in there is VW (yes, from the car) Chromoly pushrods which were machined and adapted especially. The lonesome piston is a 1980’s modified Goldstar jobby which was shaved down to reduce compression, and finally some Goldstar cams and oversized valves. Phew.