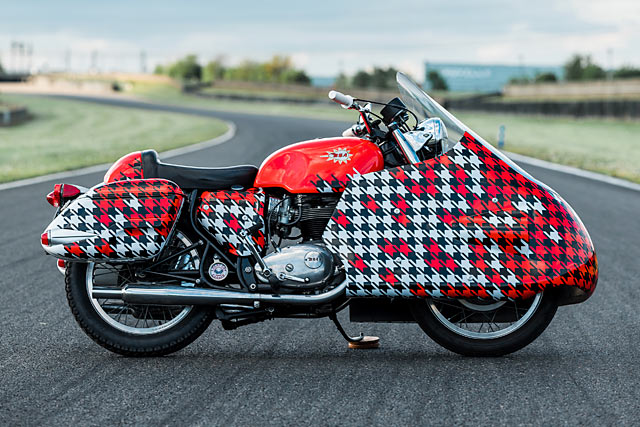 Standing out from the crowd; it goes with motorcycling like white on rice. And while we’ve never been in a witness protection program, we’re pretty sure that the police’s brief to the person they are looking after goes nothing like, “Make sure you buy yourself a classic motorcycle, customise it to make it really stand out and then tear around your neighbourhood attracting as much attention as you can.” We don’t know much about the owner of this latest bike from France’s Lucky Cat Garage, but we’re pretty sure the guy’s not trying to lay low. Exhibit A is the fact that he owns a stunning ‘68 BSA Spitfire MkIV. Exhibit B is the fact that he agreed to let Lucky Cat add a dustbin fairing to it. And exhibit C? Check that houndstooth! Starting its life out in 1968 when it was ridden out of the company’s Birmingham plant, this BSA A65 Spitfire MkIV found its way to France before being fully restored back to its original livery. For most bikes, that’s a life well lived; 50 years of thrills and spills, only to be reset to look just how you did when you were born. But this one particular BSA had yet another life in store; that of a custom. And before the classic fanatics amongst us get their waxed cotton knickers in a knot, know this. “The owner’s first point was insisting that the modifications be 100% reversible.” And that’s just what Seb and Laurence from France’s Lucky Cat Garage did.

“His second point,” continues Seb, “was to keep the original red paint. He said that he wasn’t really in love with it, but at the same time he wasn’t keen to change it.” With those words as his brief, Seb and Laurence began to grind his head’s creative gears. Mulling on the fact that the bike was equipped with a large-ish 5 gallon fiberglass tank, they boys lightbulbed. The bike would get a Très Européen ‘Gran Turismo’ treatment, replete with saddlebags and a full fairing to protect the rider. Grand Tour, indeed. Rolling his sleeves up, they started by choosing the luggage as their impact on the bike’s look would be substantial. After much web time, he settled with Buco ‘Twinmaster’ fiberglass saddlebags, mainly due to their streamlined look and slim width. And for the fairing, it’s an eye-popping dustbin design with a deep windscreen recess that completes the bodywork and matches nicely with the curvy style of the original BSA tank and side panels. It was sourced from faring supplier and then extensively modified to suit the task at hand. As a road-going bike, forward vision was more than a passing concern for Lucky Cat. Sure, sprint racers and drag bikes can probably assume that the way ahead is clear, but the same cannot be said for riders travelling through France’s cow-stocked countryside. But who are we kidding? It’s the paint job that’s brought us all here. “In English, the pattern is called ‘houndstooth’. In French, we say ‘pied-de-coq’. While it usually combines only two colours, I did this one using three tones to try to make the bike a bit less red. The size of the pattern has been calculated to fit perfectly on each of the bike’s main elements, including the fairing, saddlebags and side panels – all of which have very different relative sizes.” But why this pattern? Simply because it’s both modern and vintage, classy and shocking all at the same time. “Maybe also because the owner of the bike is a chef and this pattern is traditionally used on French chef pants.”

[superquote]“In English, the pattern is called ‘houndstooth’. In French, we say ‘pied-de-coq.’”[/superquote]

And with a bold bike design comes a bolder than usual challenge. Custom builders will commonly name and shame electrics and carbs as being the receiver of most workshop swears, but not in this case. Drawing the houndstooth pattern on the round nose of the fairing was Seb’s real challenge here. It took many hours of hand-drawing before he achieved a perfect, natural-looking fit. But what about the smaller details? Our favourites include the St Christophe medal that’s been integrated in the steering damper knob, while a modern GPS mount has been added inside the fairing. Seb and Laurence also added larger handlebars for a more comfortable, more long distance, riding position and some NOS white ‘Gran Turismo’ grips to complete the 1960s comfy style. “To ensure the owner is able to get this amazing BSA Spitfire MkIV back to its original, classic appearance, all the necessary mounting brackets were bolted on and no frame modifications have been done,” reiterates Seb. “The fairing and side panels were painted, while the fuel tank and seat cowl copped some removable houndstooth decals. “The time needed to get it back to original is around two hours, but the owner is so happy with the bike’s new and distinctive style, that he admits he probably won’t ever change it.”