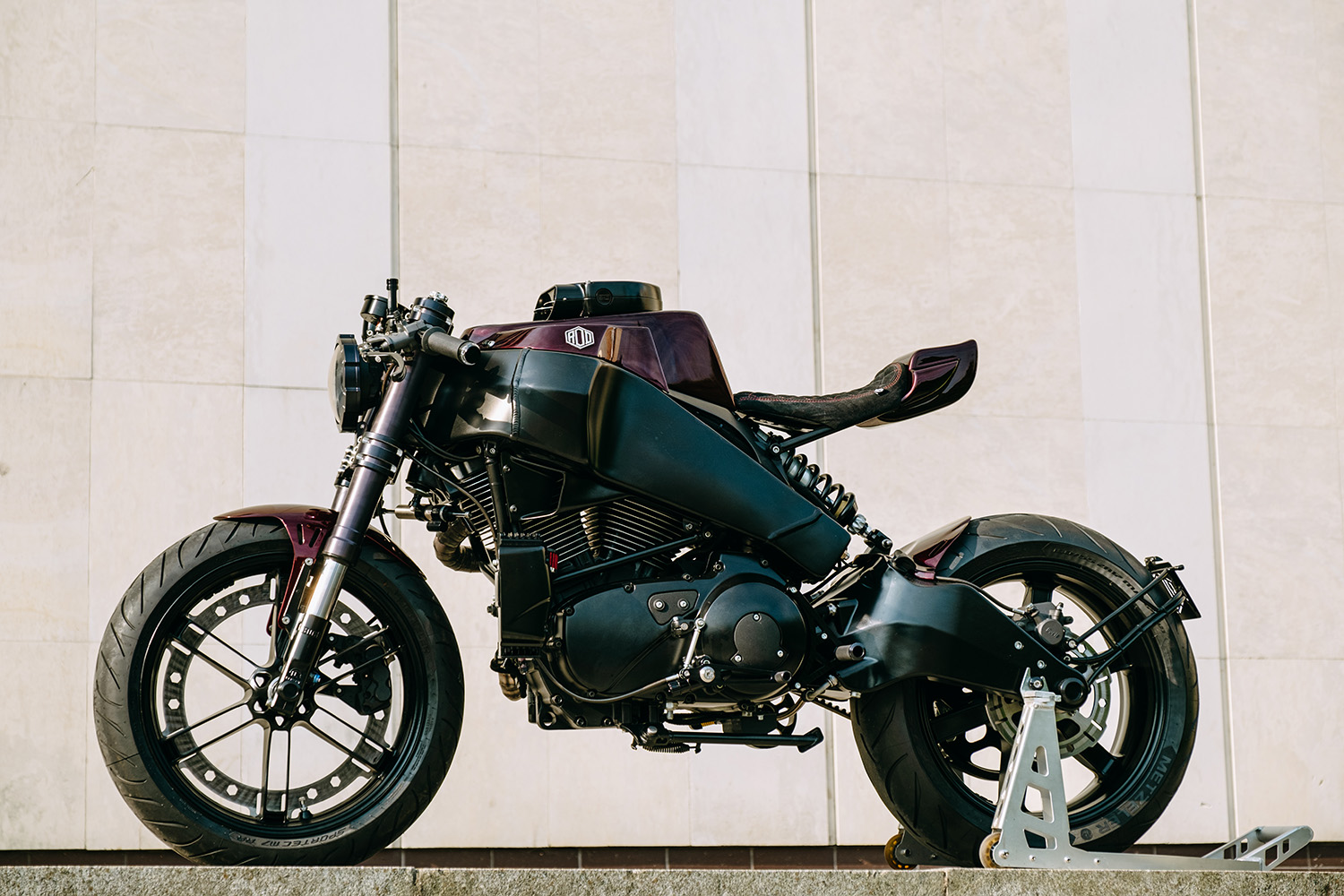 If this bike had been around in May of ’98, it would have been right at home in the octane fired film clip for Metallica’s song Fuel. A bug catcher, big rubber and a thumping twin spitting out open pipes, this machine has Hot Rod written all over it. But you won’t find it stateside, this heavenly slice of American muscle was built in the Czech Republic by a lifelong devotee of two wheels, David Zima. With his brother Martin, they run Rod Motorcycles and mainly build classic cafe racers, but every now and then things get crazy. Bought to them as a wreck, this Buell XB12S leaves the shop as one of the most badass beasts to rip up the roads of Europe.

Riding the Buell one day, the owner happened to be admiring someone sitting in a parked car just a little too closely when ‘bang’, he’d binned it! The bike was in one hell of a sorry state and for a few weeks it sat that way. But on a visit to the Bohemian Custom Show, he happened to notice the bikes of Rod Motorcycles and a particular Buell concept that was sitting on their stand. It was then he knew his bike wouldn’t be taken to the dealer for a standard fix, but undergo a full custom makeover at the hands of Mr Zima. So what was the damage to the bike, a cracked rim, bent front forks, cracked clamps, a damaged frame, a torn engine case, a cracked head and more!

To get things rolling, quite literally, they first managed to salvage the wheel and get it back nice and straight. With the forks needing to be replaced, they weren’t going to go back on standard and the front legs have been rebuilt with a full cartridge kit from Matris suspension. To fit them up, it was over to the mill where David made a stunning pair of beefy clamps, with the upper recessed for the Motogadget Classic speedo. At the rear of the bike, a fully adjustable shock was also sourced from Matris and both ends tuned for the owner’s liking. Finally, the brake discs are custom made and match perfectly the cutout shape of the headlight surround, crazy!

Now that the Buell was rolling things progressed onto the frame repair, an extra important task given that it also holds the fuel. With it painted it was time for the visual design and the owner was keen on the rear end having just a seat, “as I say a ‘tractor saddle’, I was inclined to a different variant,” David smiles. With everyone on board an all-new subframe was fabricated to suit the new design and then over the top the tiny tail section follows. Hand shaped from aluminium, everything on this bike is done in pairs to match the V-Twin engine, and a set of sculpted shoulders bulge from the sides, while twin LED taillights sit flush in the rear.

Then it was onto the Buell’s faux tank, with the design first shaped in foam, then made in individual pieces of cardboard before being transferred onto the aluminium. “Which you then tap, shape, roll for countless hours and finally weld into a whole unit forming the cover of the ‘fuel tank’, you have a huge feeling of self-fulfilment.” David says looking at the finished product. But he wasn’t done, moulded into the top is a Kuryakyn Hypercharger intake and air cleaner, with David going so far as to make a clear top cover to let you see into the belly of the beast. Where the fuel would be held on a normal bike, there is instead a Race ECU, lithium battery and all the electrics including a Motogadget m.Unit.

This runs the show and the bike is also fitted with a Motogadget m.Lock to provide contact-free digital ignition. Running the wiring forward to the new clip-on bars, David has made his own Rod Motorcycles switchgear that is now available to the general public and in all black alloy provides for a stealth-like aesthetic. The headlight surround was machined before being fitted with an LED lens, and turn signals from Motogadget on the bars and Kellermann at the rear take care of business. To finish out the controls, a custom pair of rearsets were fabricated that require clever mounting fixtures, while a set of Brembo master cylinders gives the brakes some serious bite and converts the clutch to hydraulic.

Now David could turn his attention to the heart of the beast and first on the menu was a new cylinder head and repairing the cracked fins on the pots. A set of Zipper’s rocker covers go on top, a number of the other covers are machined in house and the engine has been painted and detailed too. To match the look of the bodywork, the air feed that supplies cooling to the rear cylinder has been shaped out of alloy and neatly matches the oil cooler surround. Then it was time to unleash the thunder, the twin exhaust pipes are hand made from individual cuts of stainless steel that are tig welded together. The bottom sections are grilled off at the ends and hide baffles that can be removed with a single screw if extra dB is your thing!

Paint was the final task and is simply stunning, a metallic silver was laid down first and then 10 coats of candy go over the top, in a custom colour that was mixed up at the shop called Black Cherry. Depending on the light the paint can appear anything from black in the shade, through rich maroons and finally eye popping red. To match it all the hand-shaped seat was covered in Alcantara and then stitched up with the diamond pattern done in red thread. The result is simply incredible, putting the hot in Rod Motorcycles and wowing crowds wherever it goes. At the Motorcycle Festival in Vienna, it took home the best exhibit, the same at the Prague All Ride Show a few weeks later. David has kept the moulds and plans to make five unique Buells, with bodywork available in everything from Carbon to Titanium, including one for himself.