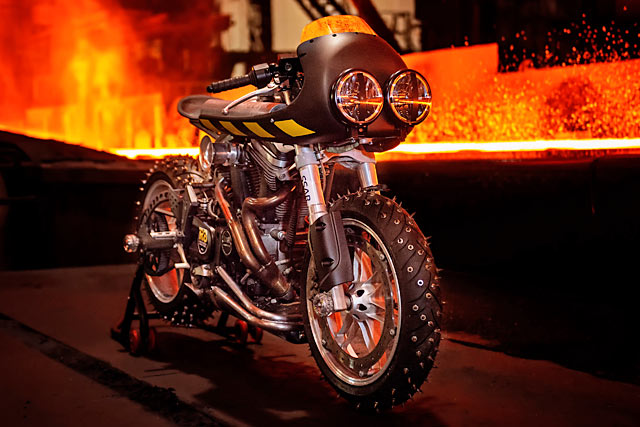 We wear our hearts on our sleeves when it comes to bikes that inhabit the edges of the modern custom scene. To put it simply, the more unique and esoteric they are, the better we like them. And we’d put money on the fact that today’s bike is just about as esoteric as you’ll find anywhere. Faced with the task of building a test mule for self-developed moto race frames, Sweden’s NCCR – or ‘Northern Classic, Custom & Race’ – were also staring down the barrel of a brutal Northern winter. Their solution? An insane Buell Ice Racer slash moonshine runner that’s hot enough to turn ice into fire. 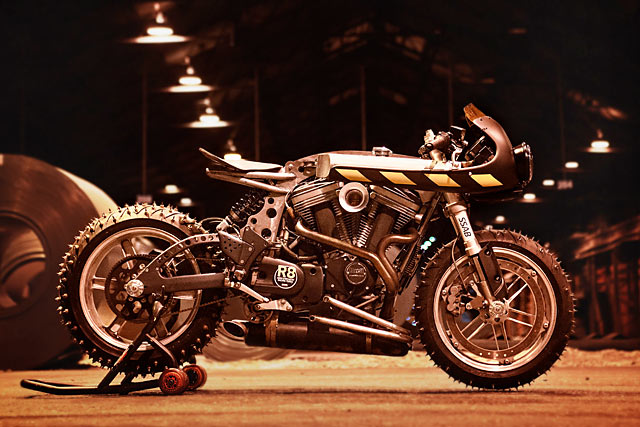 NCCR is a family company located about 350 kilometres (220 miles) north of Stockholm. For those who didn’t pay attention in high school geography, that’s way up there. Hell, it’s so far north, it makes Moscow look like Sydney. The Krüper family has worked closely for more than 20 years with Buell and Erik Buell Racing motorcycles, but now they’ve gone over the top with tube chassis builders ME-Racing and steel makers SSAB to create this beautifully mythical Norse beast. 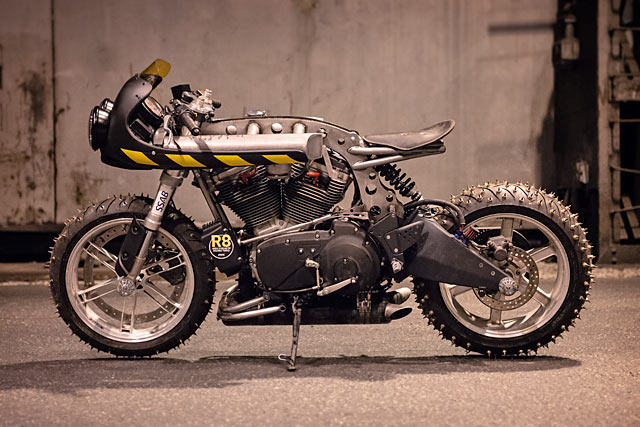 In the middle of working on their Rotax-powered V-Twin Superbike, Julia Krüper, mother Birgit and father Jens decided to have some fun. “The Rotax project is great, but we are still at the CAD stage; I really needed to take a break and get my hands dirty”, Julia recalls. With a knowing smile, Birgit adds, “We wanted to build something beyond the usual; nothing ‘out of the box’ and something without any of the usual custom bike limitations or stereotypes.”

The bike started as a Buell XB9R and kept its fuel-in-frame concept, but NCCR combined their SSAB Backbone frame with steel tubes and twin tubular fuel cells with an integrated fuel pump to supply the stock injection system. The bike still carries its factory forks and swing-arm, while the wheels are from a donor bike. As you no doubt will have noticed, the rubber has a special modification to cope with the harsh northern winters and the bike now rolls on 25mm speedway ice spikes. Shins beware. 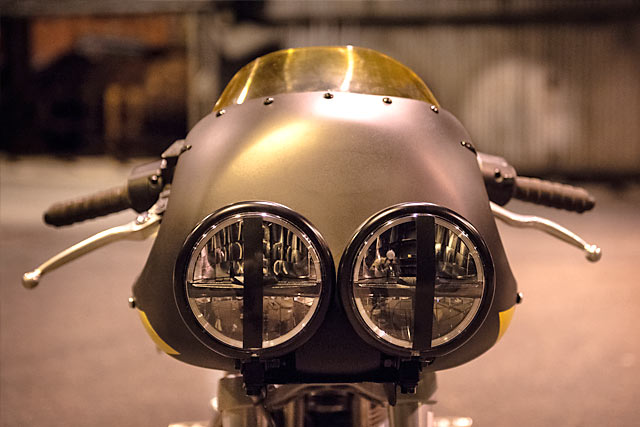 “Weather protection and visibility is important in the dark winter months up here,” Birgit says. “So we gave the bike a fairing and twin LED front lamps together with some safety stripes which can save you from rampaging trucks that inhabit the brutal, icy wastelands.” Riffing on this thought, mother and daughter sat down and came up with a story describing what it will be like in 20 years from now to ride North in winter.

[superquote]“Even if cheap EU imports have ruined the Swedish Moonshine tradition, the self-distilled booze is still a reliable fuel source up north.”[/superquote]

“The world will either be electric or post-apocalyptic by then and fuel probably won’t be available anymore. Winters might be less cold, but weather protection would still be necessary. Even if cheap EU imports have ruined the Swedish Moonshine tradition, the self-distilled booze is still a reliable fuel source up north and probably will stay that way in 20 years from now.” 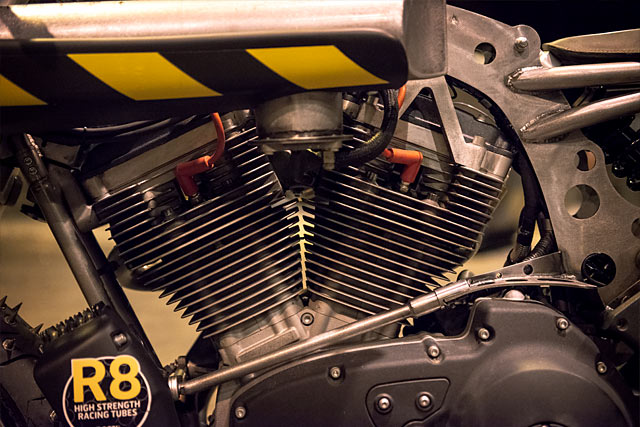 So, the idea was to weld two fuel cells on each side of their custom steel frame. “We will need to go from village to village to hang with the locals and buy the booze. Also, that design will give us the perfect spot to mount a big backpack”, Julia notes. The Firebolt’s engine and factory race kit was kept untouched, but the injection system was converted from top-filling to side-sucking and got an E85 mod to handle the ingestion of illegal alcohol. 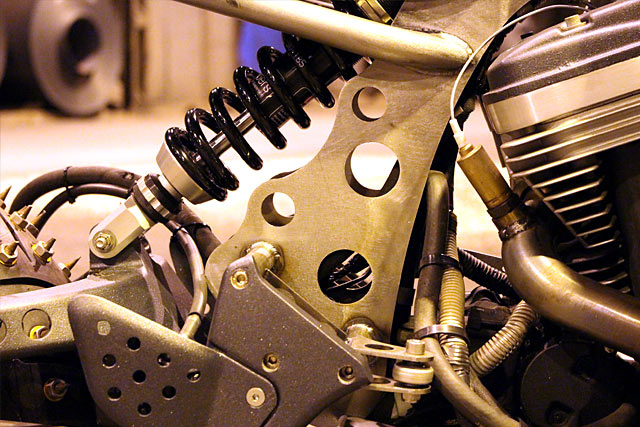 Incidentally, the spikes were leftovers from NCCR’s 238 km/h world record ice speed run back in 2009 with stunt rider Craig Jones on Lake Dellen. Now that the ladies had the main parts for their Nordic wastelands project together, the cravings for dirty hands were about to be answered; things began with the construction of the twin tanks and progressed quickly from there. Spikes, moonshine, the apocalypse and world speed records. Could this bike be any bloody cooler? 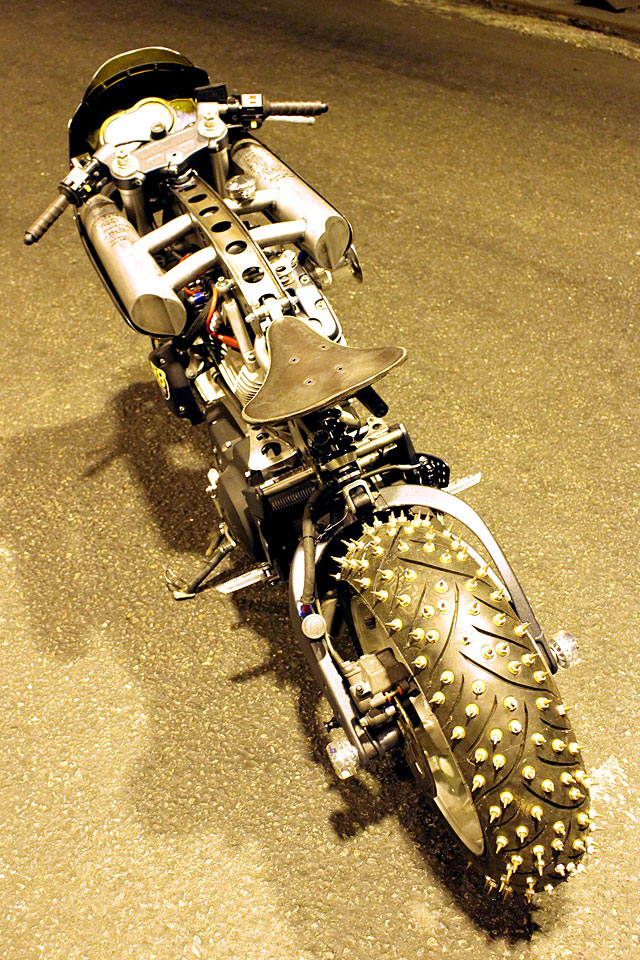 The front fairing is a reproduction of a 250 Puch race bike from the 60’s and was made by Kent Riches from Airtech in California. The LEDs are road legal 4.5 inch Bates-style items out of NCCR´s own store and are apparently perfect for Swedish winter nights. The store also produced a Highsider Apollo all in one taillight, brake light and blinker combo, which fit snugly into the end of the steel tubes under the seat.

A lithium ion battery now sits along with the other electrics in the modified Buell XB fairing carrier. Out back, a Wilbers rear shock was used to get rid of the original external reservoir. And finally, more steel tube was used to provide exhaust crash protection and NCCR’s in-house leather department made the suitably Spartan seat and grips.

The icing on the cake was when NCCR got an invitation from the SSAB for a photoshoot in their Borlänge steel mill. “It was really cool to see where the steel we use comes from”, says Birgit. Julia adds, “The mill had so many great locations, we’ll definitely come back next year to shoot when we have our superbike with the custom trellis frame finished.”