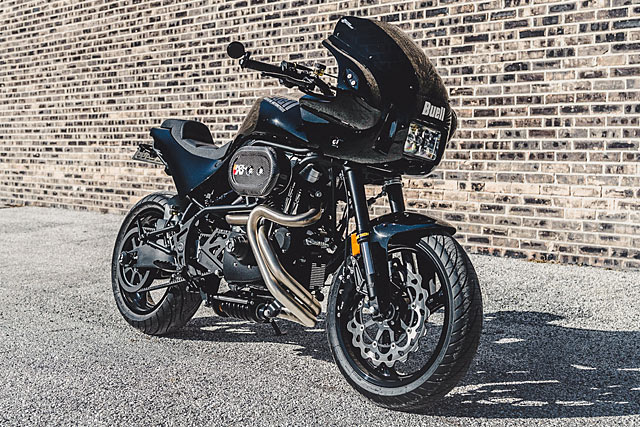 Being a child of the 80s, many of my first moto memories are tied back to this completely insane decade. Be it Mad Max, Purple Rain, Akira or Top Gun, their weird mix of B grade schlock coolness, no-holds barred fashion disasters and overt soft-focus machismo went a long way to making me the tragic bike fan I am today. Taking the decade and running with it, DesmoBibu’s Alex Maslin (aka ‘Bibu’) has created this 80s muscle bike restomod he’s named ‘The Buellinator’. Where’s Arnie when you need him? 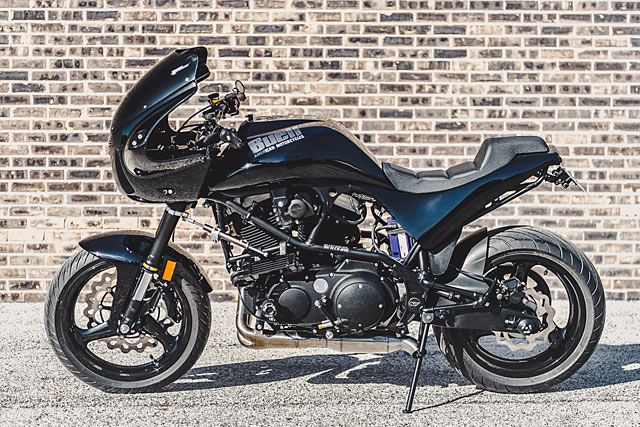 Yes, his name is Alex, but everyone calls him ‘Bibu’ (pronounced ‘Bee-Boo’.) “I moved here from Romania a few years ago to follow my passion for custom motorcycles. For a year I’ve helped Tony from Analog Motorcycles around the shop. I worked on his Ducati 250 single build, the KTM super duke, the Royal Enfield Grasshopper and many others learning a lot about the business of building motorcycles. I was also able to use Tony’s shop to build a part of this bike. However, since completing the build I’ve decided to leave Analog and continue pursuing my passion for custom motorcycles on my own.” 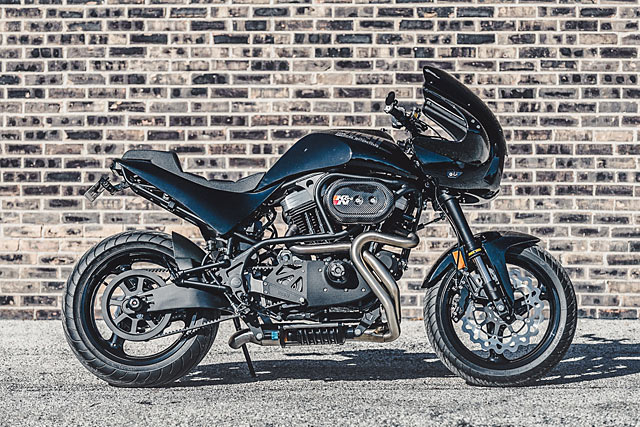 Alex says he’d describe it as a ‘retro-style muscle bike,’ but he also references his goal to make it a daily rider as well. “The intention was to build a custom Buell restomod in the vein of a late 80’s or early 90’s macho bike with gobs of torque, a beautiful v-twin engine and that Buell tube frame that would be comfortable to put a bunch of miles on.” 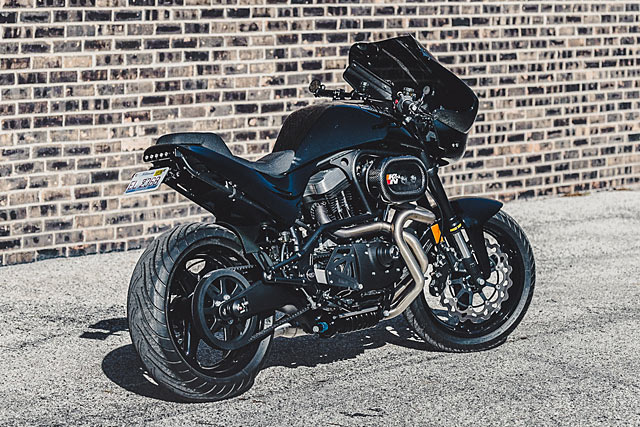 Addressing the train-spotting specifics, Alex notes that the donor bike as a ’00 Buell S3T (aka ‘the touring version’) Thunderbolt that he picked up at a local Harley-Davidson dealer. And befitting of its Stallone-esque tough guy image, Alex was quick to name the bike, too. “I call it ‘The Buelligan’ he laughs. Perfect.

“The bike’s original style is what inspired me to create this custom. I love the big, retro-looking front fairing with the rectangular headlight and how well the American V-twin engine looks sitting in the frame. It seemed like it would make a really solid daily rider with a ton of style. I just tried to blend that 80s retro look with a few modern touches, which is something different these days when everything else on the road looks so futuristic or so classic.”

[superquote]“I love the big, retro-looking front fairing with the rectangular headlight and how well the American V-twin engine looks sitting in the frame.”[/superquote] 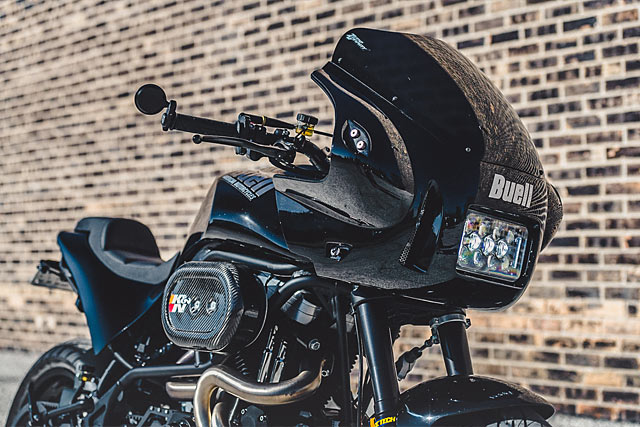 The build process was pretty straight forward, reports Alex. “The bike wasn’t in terrible shape, but having access to Tony’s shop and vendors allowed me to fabricate, refinish, powder coat or otherwise replace any parts I wanted with upgraded versions.” Thankfully this included a thorough reworking of the bike’s original tail section which… well, let’s just say that the factory bike looks better with panniers on it than without. And don’t get me started on the factory muffler. “I tore the bike down to the frame and sent it out for powder while I sourced all the new parts.” 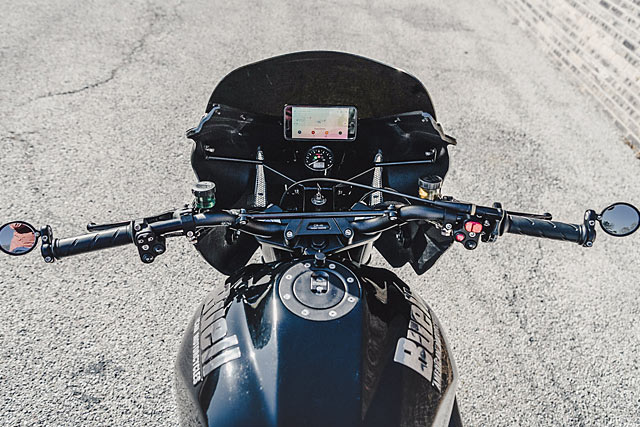 “Once the frame and the parts were back to me I was able to bolt everything on to the bike. Tony helped me finish wiring up some of the components I had not yet worked with like the Renard controls and Koso speedo.” Of course, Alex is playing down the task at hand. While the bike isn’t a million miles from the original, the genius little touches – including the masterful reworking of the seat into something that puts Buell’s original design to shame and the redesign of the dash – make the bike really stand out from the crowd. 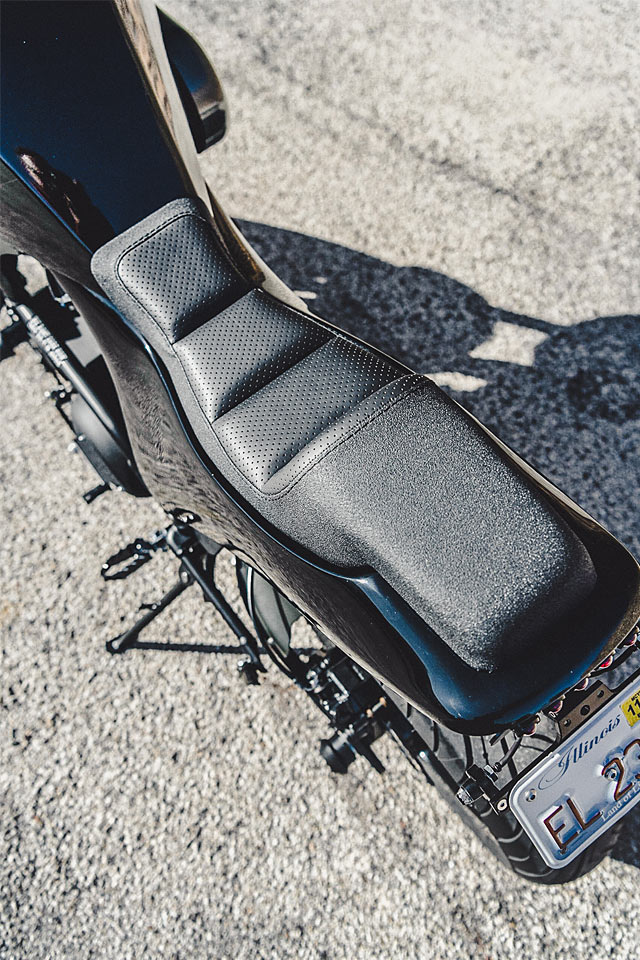 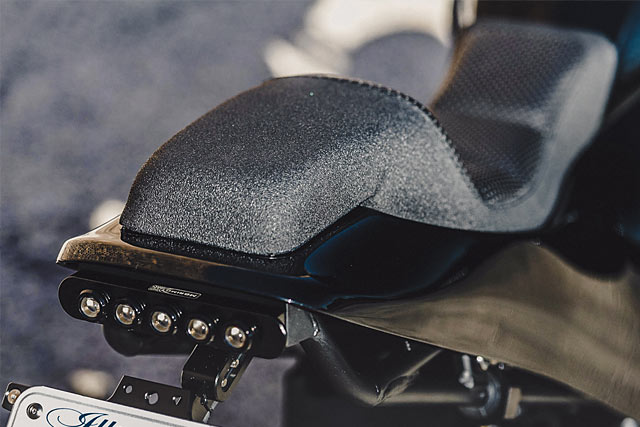 “The hardest part was finding new parts that would fit this bike. Since these Buells never saw huge production numbers, there just isn’t the aftermarket support for it versus something like a Ducati.” To their credit, the Buell community helped Alex a lot with this. “My favorite part of the bike is riding it. Erik Buell really figured out these tube-framed bikes well. They are absolutely awesome on the road.”