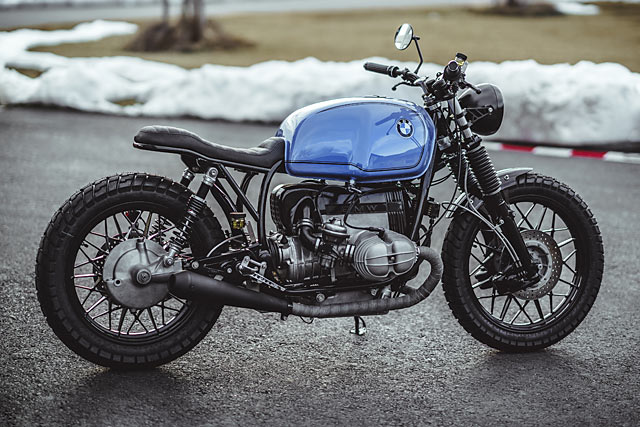 You can always tell when a shop reaches the next level. It starts with the outside-the-square thinking and the inspired bike builds that you totally weren’t expecting. Just when you’re thinking they will do ‘X’, they’ll come at you with ‘Y’. And a bloody good ‘Y’ at that. Almost like a guitarist coming back from a midnight meeting with a mysterious stranger at a crossroads on the edge of town, you’ll find that they’re suddenly playing on a whole new level. But the last and most telling trait is their through-put. A shop that’s perfected their skills seemingly has no problems sending you a killer bike every other week. And right now, that shop is Austria’s NCT Motorcycles. Here’s their latest deal with the devil, an amazing BMW R100RS scrambler they call the ‘Buffalo’. Chatting to NCT’s David Widmann, we asked him how he managed so many great builds so consistently. “When you love what you do, you work every day. You work hard to achieve all your goals and you don’t really need to sleep.” And while we’re not recommending sleep deprivation as a way to get ahead in the custom bike game, we get his point. As some bloke called Steve Jobs once said, ‘The only way to do great work is to love what you do.” Somehow, we think that David’s in exactly the right job. “This BMW is all our own. It wasn’t built for a customer or with an external brief,” David remarks. “Like the Black Stallion and our Evo Racer, it’s another all-NCT project. Primarily, our ideas were all about the bike’s scrambler stance, the blacked-out look and the 2-int0-2 pipes. The rest just flowed from there.”

As with all their work, they got the party started right with a nuts and bolts disassembly of the donor until the bike looked more like a Revell model than a real bike. This included dismantling the engine too; where some shops might fear to tread NCT stormed in, wrenches a-blazing. “After the rear frame was shortened and renewed, the full frame and the two wheels were powder coated in a gloss black. Then we designed the solo handmade seat and got it covered by our go-to upholsterer.”

Next, the tank received a full respray in the beautiful sky blue hue you see here. And the cherry on the top was the fine black pin striping work – a subtle yet effective nod to the bike’s original ‘80s regalia. Thankfully this nod didn’t extend to a 1980s BMW fairing. Then the Austrians turned their deft focus to the bike’s ‘go there’ bits. The original high-handled bars were replaced with a new set from LSL’s drool-worthy catalogue. The footpegs were both updated and moved quite a ways back. And to strike an acceptable balance between the on-road and the off, a set of Dunlop’s Trailmax hoops were slung on the bike’s original but freshly shot blasted and painted rims.

The brakes are from some company called ‘Brembo’ – you may have heard of them. The forks in the front are still the originals, but have been fully refreshed and tuned too. At the loud end, the twin rear shocks have been replaced by some sweet YSS gear. “Next we rewired the whole bike,” says Dave, clearly showing off by the very fact that he didn’t lose his mind in the process. “The Buffalo is now wearing a fresh Motogadget M-Unit and a M-Switch System.” The turn signals are also from ‘the Big M’, and are mounted at the end of the handlebars. The speedometer is from Acewell, and the battery has been mounted behind the gearbox. “As with all our bikes, it was important for us that they look as clean as possible. Much of the build time is spent on this; it just about perfecting the bike’s visuals.” “As everybody who builds knows, there are always hidden problems you just can’t know about when you buy a bike – especially when the bike is really old. There can be rust, problems with the engine or even bent frames. We as a company have to find all those things and figure them out so that in the end, the customer gets something with zero issues to worry about. That’s the real challenge of being a commercial bike builder.” “What we like best about the BMW is that it’s suitable for nearly every rider and situation,” David concludes. “The bike can be ridden and enjoyed by a novice or an old pro. You can ride it fast and get it on the limit where it will really excel. You can ride it hard in a forest or just motor to the local cafe to get a coffee. And to top it all off, it’s also really comfortable, so it’s no problem to ride longer distances if need be.” Personally, we can’t wait to see what NCT will do next. Their Ducati ‘Mostro 900’ is still one of our favourite bikes of 2017 so far, and we’re completely convinced that they will make a strong showing in our 2017 Bike of the Year awards. With skills and creativity like this on show, we’re expecting nothing less than a devilishly good bike. Maybe they’ll be riding this one to the crossroads at midnight for their next brainstorming meeting?